NEW ORLEANS — Prior to last month, I was a Cirque du Soleil virgin. Despite my interest in all forms of live performance, I never scored seats to a Cirque show until I was invited to check out "Varekai" – the current touring version of Cirque – in New Orleans’ Smoothie King Center.

"Varekai" surpassed my expectations, but in a surprising way. I was not wowed by some technologically produced bells and whistles; I was, rather, simply stunned by the capabilities of the highly trained and dedicated human performers.

Prior to the show, I wasn’t sure what to expect from a Cirque du Soleil performance. Like many people, I was leery of "real" circuses because of the possible mistreatment of animals, so it appealed to me that Cirque is an animal-less extravaganza that’s more of a theater experience than the traditional big top-type event.

Nonetheless, "Varekai" is every bit as thrilling – and at times nerve-wracking – as traditional circus spectacles. At one point, a performer is raised far above the stage for a breathtaking act in an aerial net and later performers lay on their backs with their legs in the air, twirling and flipping multiple people with their feet. For me, acts that push the limits of the human body's physical capabilities are far more spellbinding and way less depressing than a monkey on a bike.

In short, I was seduced by "Varekai."

"Varekai" – which means "wherever" in the Romany language – is described as an "acrobatic tribute to the nomadic soul." It is based on the Greek myth of Icarus and re-imagines that he fell to the ground after flying too close to the sun.

In the traditional telling Icarus drowns in the sea. However, in "Varekai" he finds himself at the base of a volcano in a forest filled with exotic creatures where he must learn to fly again.

"Varekai" has a visually interesting set featuring 330 aluminum and carbon fiber "trees" – 20 of which are climbable. There’s also a catwalk and activity that emerges from beneath the stage through portals in the floor. The multiple levels of simultaneous entertainment create a new-school, vertical three-ringed circus. 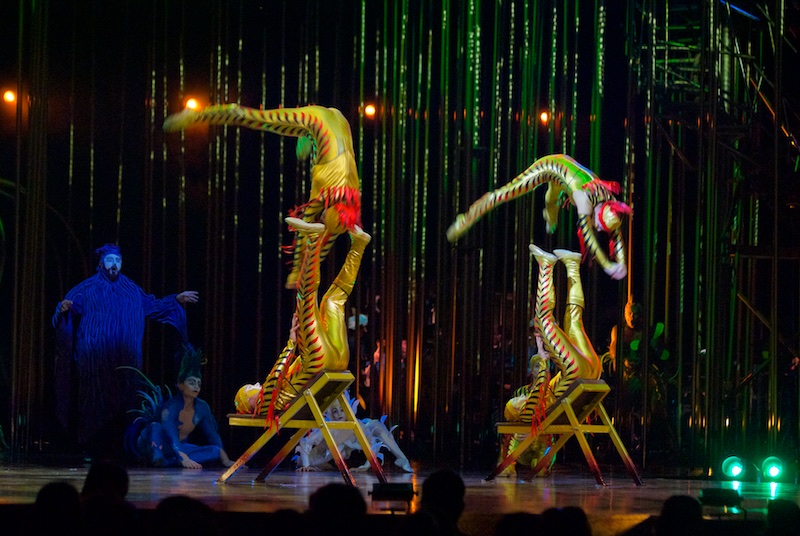 Also to its credit, "Varekai" does not rely on LED screens – or screens of any kind for that matter – to enhance the aesthetic or mesmerizing qualities of the show. Sometimes the shadows on the walls are as incredible as the performers.

Despite the many differences between "Varekai" – and Cirque performances in general – and the old fashioned circus, the thrill, amazement and anxiousness are prevalent in both. Audience members of all ages go through a series of emotions and share the same fear of a performer falling – and the relief when they don’t.

The commentary on language in all Cirque shows is profound. With the exception of a few sentences in English, all of the vocal parts are "gibberish." Because I saw the show in New Orleans it was flavored with a few local words like "bayou" and it will be interesting to see which "Milwaukee words" make it into the mix. (I predict "Fonz" but am hoping for "cheese.")

Despite the lack of "real" language, the show is entirely comprehensible and reminds us that expression and body language create universal communication. Best of all, not only can we completely understand what’s happening, we are brought to laughter and empathy.

"There are so many hidden messages you can find in Varekai," says Vanessa Napoli, publicist for "Varekai." "There is much communicated through metaphors and theatrical elements."

One of the compelling messages of "Varekai" is that when life knocks us down, other people help us to stand back up in various ways, but it isn’t until we also help ourselves that are we able to travel a new path: surpassing our supposed limitations and, in the case of the reimagined Icarus, falling in love again.

The fact we are often our biggest obstacle is demonstrated through the "limping angel" character who encourages Icarus to get with it through what might be perceived as tough love.

The character, played by Brazilian breakdancer Raphael Botelho Nepomuceno, delivers one of the most impressive and acrobatic performances in the show while on crutches. This reminds Icarus – and the audience – that our disabilities are often only in our minds and should not be factored into what we are capable of achieving.

Interestingly, the actor who originally played this part did not have use of his legs, but Nepomuceno had no experience on crutches prior to taking on the role.

"For me it was new. It was different. In breakdancing you are usually more free," says Nepomuceno.

I spent the day after the show behind the scenes with Napoli and witnessed the daily life of the performers. I particularly enjoyed seeing and hearing the minor details that make Cirque so spectacular, like the fact that all of the shoes are hand painted and that the performers apply their own makeup. The elaborate face painting usually takes two hours to apply when the performers first learn and eventually becomes a 45- to 60-minute process.

"For some, this is the most challenging part of being in the show," says Tanya Jacobs, head of wardrobe for "Varekai."

The "Varekai" wardrobe consists of 130 costumes and 600 total elements including shoes, hats and accessories. During the tour it takes a team of four costumers 250 hours a week to maintain the wardrobe. 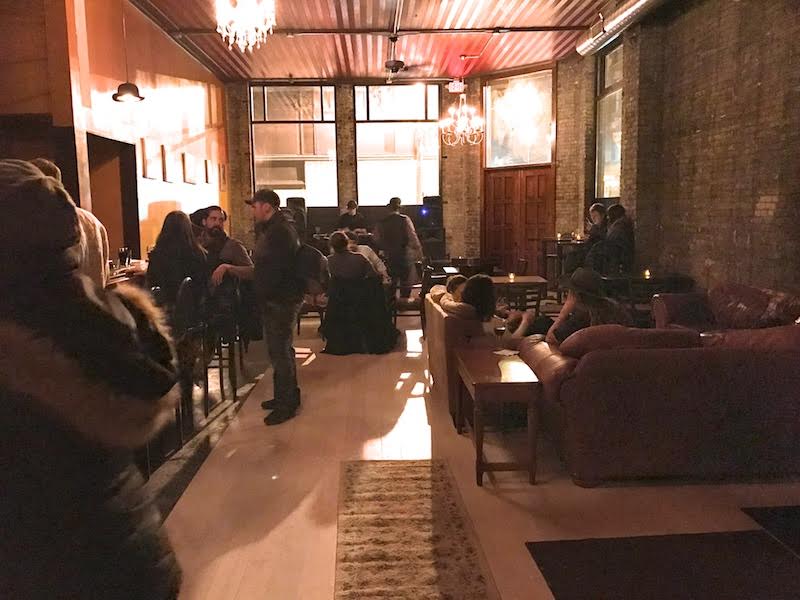 "One person looks after shoes, one after hats, one costumes, and I oversee everything else," says Jacobs.

The late Eiko Ishioka designed Varekai’s costumes. Ishioka won the Academy Award for Best Costume Design for her work in Francis Ford Coppola's film "Bram Stoker’s Dracula" and was posthumously nominated in 2012 for an Academy Award in the same category for her work on the film "Mirror Mirror" starring Julia Roberts.

All of the performers have a year-to-year contract and a few have been with the show since it debuted in 2002. The performers range in age from 18 to 56, with the majority of them in their twenties, and represent 18 different countries including Japan, Australia, Russia and the United States. (There is currently only one performer from the U.S. in Varekai.)

Some of the performers have a mix of talents – dance, acrobatics, gymnastics, theater – but others have a very focused niche. A fair share attended Circus School where they learned a little bit of everything.

Years ago, Cirque du Soleil provided more training for the show members than is necessary today. Cirque still trains performers at its home base in Montreal but, because the show became such a phenomenon over the years, more people are deciding – after seeing the show at a young age – that they want the circus arts (or other aspects of the show including tech or costume design) as their career when they grow up.

"I’ve heard so many beautiful stories from people in the show who saw it as a child and told their parents, ‘that’s what I am going to do someday,’" says Napoli. "Kids don’t even know what is possible for their future unless we as adults expose them to it. But at any age, Cirque helps you dream, get inspired, obtain your goals and grow as an individual. I think the world needs more of that."

The performers and stage crew travel with the show 44 out of 52 weeks a year. Consequently, according to Napoli, Varekai is very much like a large family.

Cirque du Soleil was founded in northern Canada in 1984 by two street performers. Cirque celebrated its 30 year anniversary this year and is now the largest theatrical producer in the world. There are 19 different Cirque du Soleil shows in over 271 cities on every continent (with the exception of Antarctica) and eight performances in Las Vegas alone each night.

Cirque du Soleil premiered "Varekai" in 2002 as a "big top" show, touring with its own freestanding tent. In December 2013, Varekai was reformatted for arena performances, which allowed the show to visit dozens more cities for shorter periods of time and cut set-up time from eight or nine days to approximately 15 hours.

Although all of Cirque's shows feature a unique theme and storyline, all blend circus styles from around the world, have continuous live music and the performers (rather than stagehands) change the props.

"Every show is a little different," says Michael Ocampo, Varekai's head coach, who has been with Cirque du Soleil for 21 years. "We are still fine tuning the automation and the aerial acts since we moved just a year ago into arena and in general we are always fine tuning, always making it as good as we can."

Cirque du Soleil employs approximately 4,000 people from over 40 countries. Every time a show travels to a new city, local help is hired for loading and unloading gear from 18 semi trucks, from "runners" to dish washers, wardrobe helpers and many more.

"Cirque contributes to the local economy because, unlike some circuses that travel by train and sleep on the train, we stay in hotels," says Napoli.

The performers travel by bus from show to show if the next city is within a seven-hour drive, otherwise they fly to the destination.

For parents considering taking young children to "Varekai," keep in mind that kids of all ages will most likely find the show fascinating, but there is a dropping of clown pants and a mildly bawdy "strip tease."

"People of all ages will appreciate the messaging behind Varekai. It’s so beautiful. You don’t need your legs to dance or your wings to fly. You can always do it in other ways," says Napoli.

"Cirque du Soleil: Varekai" comes to the BMO Harris Bradley Center Dec. 18-21. Tickets range in price from $35 to $150. Select seats are $15 off for Cyber Week thru Sunday, Dec. 7. Go here for tickets or more information.