The Tony-nominated musical "Waitress" will enjoy a brief Milwaukee engagement at the Marcus Center, Jan. 2-7. In celebration of the musical's Cream City debut, the Marcus Center teamed up with B93.3 to host a pie-making contest. Here are the delicious results.

The Tony-nominated musical "Waitress" will enjoy a brief Milwaukee engagement at the Marcus Center Jan. 2-7. In celebration of the musical’s Cream City debut, the Marcus Center teamed up with radio's B93.3 to host a pie-making contest for area bakers.

The contest resulted in a face-off between four finalists on Wednesday, Dec. 12 in the Marcus Center’s Green Room. Judges included TV and radio film critic Ryan Jay, myself and B93 radio personality Joe Krauss.

Dana McCormick, a piano teacher famous for the holiday truffles she makes around the holidays, went all out with her "Little Guy Likes Peanut Butter Pie," a pie featuring peanut butter pudding filling and chocolate ganache topped off with peanut butter buckeyes. She says was named for her youngest son, a pie lover who also once owned a helmet that she says "looked just like a peanut butter ball." 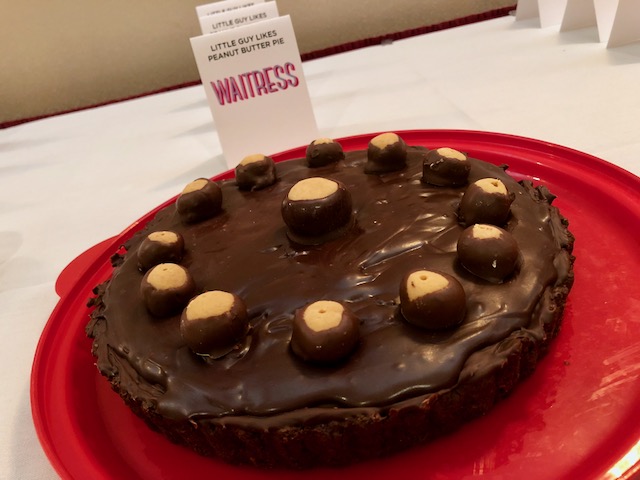 Meanwhile, Jamie Wallner – an environmental health and safety manager by day and baker by night – presented a pie for which she’s gained acclaim among her family and friends: Kentucky derby pie, complete with sweet chocolate, crisp pecans and a boozy bourbon zip. 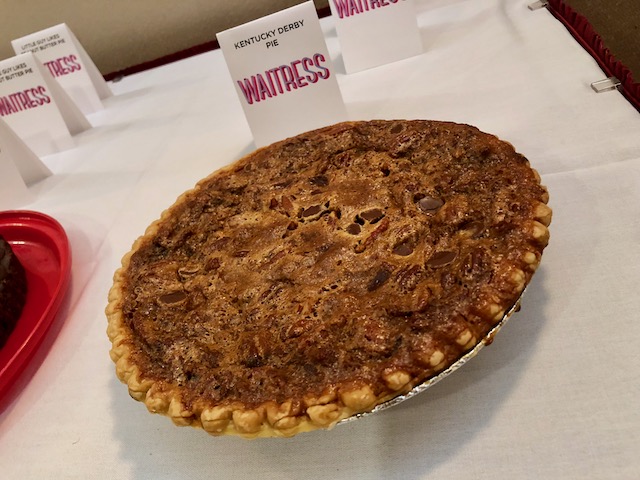 And then there was Bridget Rhode’s perfect pear pie made with Bartlett pears layered atop creamy custard in a maple walnut pie crust. Rhode, who’s known for her desserts, says it’s a pie she often brings to gatherings. And it’s one her daughters encouraged her to enter into the competition. 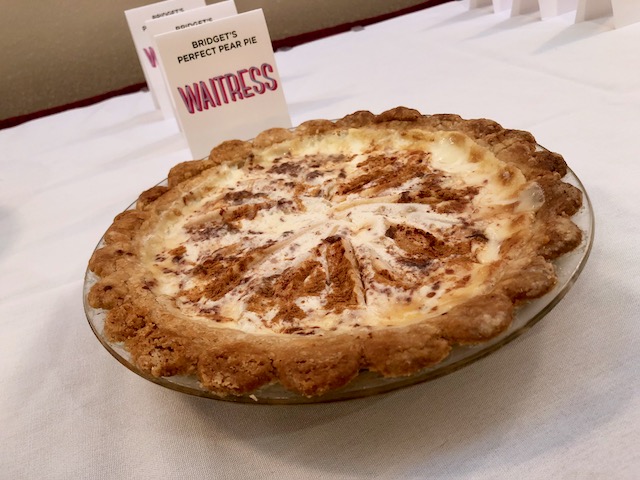 And while each pie was sweet and delicious, there was one that stood out from the crowd: the sugar plum pie with vanilla brandy sauce from Allison Cebulla. And Cebulla went home with the grand prize, which included four tickets to "Waitress," a copy of "Sugar Butter Flour: The Waitress Pie Book" and inclusion of her recipe in the cookbook during the Milwaukee performance.

The pie, which is rife with holiday spices, features a filling of spiced plums, a cardmom streusel and an ultra flaky pie crust. Meanwhile, the lily is officially gilded with a topping of vanilla brandy sauce. 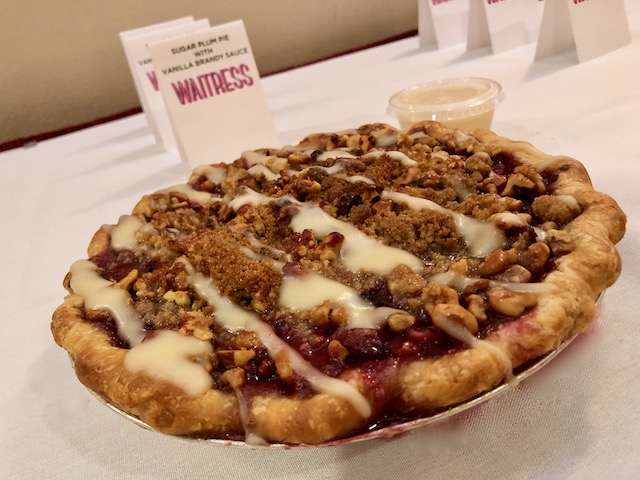 "Among all the things I make, pie is my signature item," notes Cebulla, who says cinnamon rolls come in at a close second. "I’ve been baking since I could stand on a chair next to my mom in the kitchen," she adds, noting that pie crust was actually the first pastry she ever learned to make.

And just in case you’d like to taste it for yourself, Cebulla has generously shared her recipe.

1. Position oven rack to the middle of the oven. Preheat oven to 375F. Line a sheet pan or cookie sheet with parchment paper.
2. Place the filling in a heaping mound in the pie crust. Top with approximately 1½ cups streusel.
3. Bake pie on parchment line cookie sheet for 30 minutes. Reduce oven temperature to 350F and baked for another 30-45 minutes, or until filling is bubbling and crust is golden brown.
4. Allow pie to cool for 2-3 hours before slicing and top with Vanilla Brandy Sauce, as desired.

1. Place cut plums in a large mixing bowl. Set aside.
2. In a small mixing bowl, rub fresh ginger and orange zest into the sugar, releasing the fruits’ natural oils. To the sugar mixture, add the cornstarch, cinnamon, nutmeg, cloves, salt, and vanilla extract. Stir until a light paste forms.
3. Transfer sugar and spice mixture to the large mixing bowl with plums and toss until the plums are evenly coated.
4. The filling is now ready to be transferred to a prepared pie shell.

1. In a small mixing bowl, combine all ingredients. Rub the butter into the dry ingredients until the mixture is the consistency of graham cracker crumbs.
2. Set aside until ready to assemble pie.

1. In a small saucepan over medium heat, melt butter. Once butter is melted, whisk in all-purpose flour and cook for about 2-3 minutes, stirring constantly, until mixture is light golden brown and smelling nutty.
2. Whisk in heavy cream, vanilla, sugar and salt. Stir until thickened, about 1-2 minutes. Take pan off heat.
3. Stir in brandy and refrigerate until ready to serve.
4. When ready to serve pie, gently warm the brandy sauce in a small saucepan over low heat.

1. In a medium mixing bowl, combine dry ingredients.
2. With a pastry cutter, fork, or your fingers, cut in the butter and shortening until the fats become pea-sized or slightly smaller.
3. Mix in ice water with a spatula or wooden spoon until the dough is ragged and just about to come together.
4. Gently press together dough, making 3-4 folds. (It’s okay if the dough isn’t completely damp or it feels like it’s too loose.) Form the dough (as best you can) into a round and tightly wrap with plastic wrap. Allow the dough to rest in the refrigerator overnight.
5. Once chilled, roll out dough on a lightly floured surface. Roll dough into a circle approximately 12 inches across. Carefully transfer to a 9" pie tin and crimp edges as desired.
6. Refrigerate until ready to use.

7 reasons why pie is better than cake

Wisconsin's "most searched pie" for Pi Day isn't what you think