Is it possible that, between the Michigan side and the Wisconsin side, one beach is best, that one coast has the most? Or is there just not even a difference between the two shores of Lake Michigan? We chatted to an expert who's lived on both sides.

OK, maybe not so much. The two opposite shores of Lake Michigan haven’t had any particularly notable rap feuds, cross-water sports rivalries or other brands of culture clashes; after all, our feuds tend to be with the folks a few miles south rather than those to the east. Plus, the only thing that unites us (not including the bordering Upper Peninsula to the north) is also what separates us.

But about that lake. Is it possible that one beach is best, that one coast has the most? Or is there just not even a difference between the two shores? To get to the bottom of this mostly arbitrary beach battle, we talked to an expert, somebody who knows this body of water both professionally and personally: Ken Leinbach. 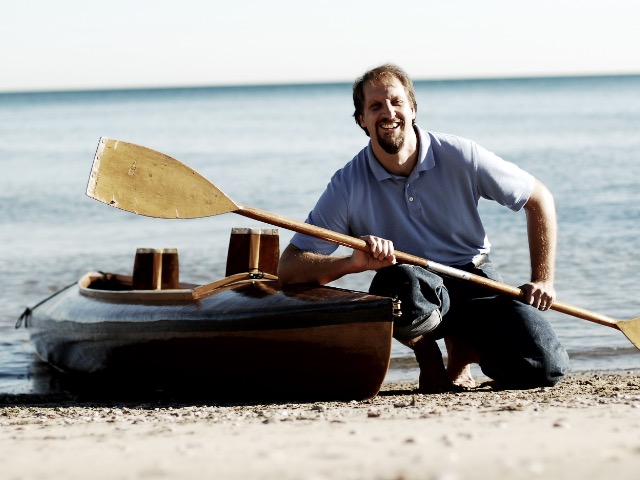 Leinbach has spent almost two decades focusing on the lake and both the natural and man-made habitat around it as the executive director of the Urban Ecology Center. There, he’s helped build an economically and environmentally sustainable community center and promote environmental education – in addition to his work as a governor-appointed member of the Wisconsin Coastal Management Council, advising and distributing funds toward efforts protecting and cleaning the Great Lakes for the past 15 years.

But while he’s spent close to 20 years calling the body of water his job, he’s spent even longer calling it home – from both sides of the lake. Leinbach grew up with his family living and running a camp and conference center in Leelanau County, Michigan, located on a small peninsula similar to Wisconsin’s just across the lake. He left for college when he was 18 and worked several jobs across the country, mostly on the East Coast, before eventually making his way back to Lake Michigan in 1995 – just on the opposite side from his childhood.

"My wife at the time had a career move that required her to come to Milwaukee, and so I followed her to Milwaukee," Leinbach explained. "At the time, we had two little kids, and I said I’d take care of the kids while she had her commitment in Milwaukee as long as we could live within a mile of Lake Michigan. That was my requirement."

Now, after providing much of his life with a beautiful backdrop, Leinbach gets to give back.

"For me, it’s a bit full-circle," he said. "When you’re growing up on Lake Michigan, you just grow up; you’re a kid, and you don’t really think about it. But then when you leave, you realize how much you love the place, love the water and love it all. So being able to come back and participate in its wellbeing, it just makes me happy."

But enough of the niceties: Which shore reigns supreme?

"I hate to say it … I really love Wisconsin and I love where I live, but Michigan is the preferred side," Leinbach confessed.

Well that’s a cold splash of water. But before you start pelting Leinbach with some fresh Lake Michigan-filled water balloons, fellow Wisconsinites, it’s nothing personal. Leinbach noted that, culture-wise, the two sides are largely the same, "a Midwestern culture more than a Michigan or Wisconsin culture." In fact, his hometown peninsula shared much in common with its Wisconsin mirror across the lake, Door County, featuring cherry orchards and quaint little villages.

It’s not simply hometown nostalgia either for the side of the lake’s namesake. According to Leinbach, Michigan’s shores simply have science on their side.

"The winds generally go from west to east in this country, and that means that the warm water in the summer gets pushed to the Michigan side of the lake," he explained. "So the water is warmer for swimming and playing and things like that. What happens in Wisconsin is that when the warmer water gets pushed to the Michigan side, the cold water from underneath fills the space. So you can have really cold water in the summer time just based on wind direction – and that happens more frequently in Wisconsin than in Michigan.

"You also tend to get bigger waves because you have more wind pushing in that direction, and you get a lot more sand because historically, over eons, the wind blows the sand, so there’s more dunes and beaches than on the Wisconsin side."

The wind doesn’t just blow in Michigan’s favor during the sunny summer months either. Thanks to the winds of winter, according to Leinbach, the Michigan side gets more snow and warmer temperatures, while Wisconsin tends to get colder weather.

"In Wisconsin, you get those bitter, bitter cold days – that’s the air flow coming across the plains," Leinbach said. "Then it hits Lake Michigan – and in the wintertime, Lake Michigan is actually warmer than the air, so it starts to warm the air, and you get slightly warmed temperatures and more snow on the Michigan side."

So if you’re a fan of swimming, waves, warmer weather and snowier holiday seasons, according to Leinbach, you’re best bet is the Michigan side of the lake. But he does note that the differences aren’t hugely radical – and that the Wisconsin side is still wonderful. After all, you’re still next to fresh water and a natural national landmark.

"I think anywhere where you can see a vista, just see off into the distance, is good for the spirit and soul," Leinbach said. "It’s why people like to go up on high mountains and being out on the plains and on the ocean. There’s something about it that affects one’s spirit. I think the magnitude of it is just something else."

Michigan, you win this fight, but clearly there’s no way anyone can lose with Lake Michigan at their side – whichever side that may be.

The Harbor District: A new Milwaukee neighborhood is in the works