Globe-trotting singer/songwriter Brett Newski is spending more time at home in Milwaukee these days and on Saturday evening he's playing what he expects will be his biggest Big Gig yet.

Globe-trotting singer/songwriter Brett Newski is spending more time at home in Milwaukee these days and on Saturday evening he's playing what he expects will be his biggest Big Gig yet.

Newski – who we first talked to in 2014, and then again last year – appears on the revamped Miller Lite Oasis stage with drummer Matt Spatola and bassist Greg Roteik.

We got a chance to talk to Newski in advance of the show to ask about where he's traveling these days and what he's most excited about at this year's Big Gig. 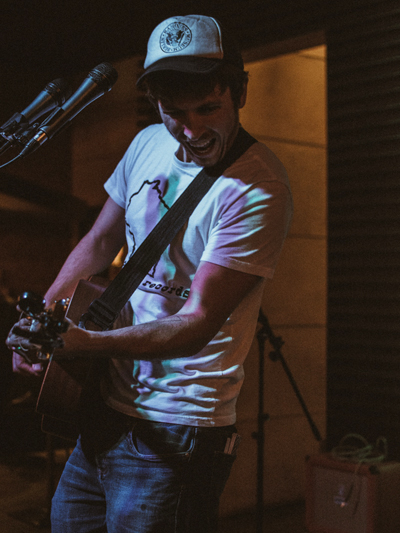 OnMilwaukee: Are you back in Milwaukee most of the time these days or still roaming the world?

Brett Newski: I am actually drinking caffeine in the Colectivo in Bay View as we speak. This year I've been making a point to stay in town more and establish stronger roots in town. Over the past five years I don't believe I've stayed here for more than a month at a time. I feel very loyal to Milwaukee and want to give it more of my time.

I just bought a small fixer upper house in Bay View. Trying to learn how to sand floors, paint ceilings and make sure my home does not become a rat hole. I love it here. Milwaukee is such a strong home base.

Are you excited about the Summerfest show?

Of course. This is likely the biggest Summerfest slot we've ever played. I have a new power trio and we are coming at this songs harder and faster with a bit more of a punk edge. Putting together a new lineup always gives me massive anxiety because it takes time to get a new band perfectly tight and comfortable. Summerfest will be the holy Grail of the acid tests.

How many times have you played there before?

The first time I played Summerfest I was 15 in my little high school ska band, Three Blocks to Murdock. If I were to guess this would be my ninth trip to the big fiesta.

Will you mostly play stuff from the latest record or a mix of everything?

We will be bringing you a smattering of sad songs, happy songs and a few funny songs such as "bro country" and "DIY." I'll probably open with the worst song I've ever written just to make the rest of the set look mind blowing.

Are you seeing anyone at Summerfest this year?

The Shins and probably Willy Porter and Miles Nielsen. They are quality dudes.