With five decades of stories to tell, Summerfest can't do it all in a single exhibition. So, there will be three. One of them - "Summerfest 50 Exhibit" - is on view at Milwaukee County Historical Society, 930 N. Old World 3rd St.

With five decades of stories to tell, Summerfest can’t do it all in a single exhibition. So, there will be three.

One of them – "Summerfest 50 Exhibit" – is on view at Milwaukee County Historical Society, 910 N. Old World 3rd St.

The retrospective is set up in the atrium area of the historical center’s beautiful building, with a slimmed-down version of MCHS’ Milwaukee music exhibition – "Melodies and Memories: 200 Years of Milwaukee Music" – surrounding it.

"What we've done is we've scaled down our feature exhibit from the show, which is on the history of Milwaukee music," MCHS Curator of Collections Ben Barbera says. "Which seemed to be a perfect tie-in to the Summerfest exhibit. 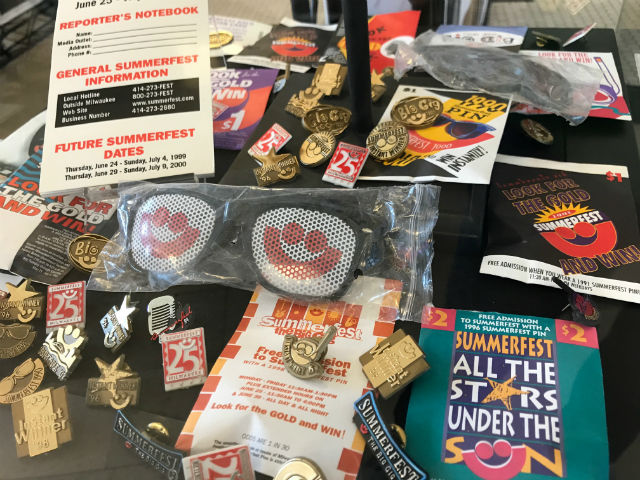 "We're looking at 50 years of Summerfest. In fact, a little bit more than 50 years because we dig into the deep history, the earliest thoughts and ideas behind it," says Barbera.

The focal point of the show is a series of exhibition panels that each highlight a decade of the festival, which launched in 1968 as a series of events of all kinds – not just music – in locations all around the city.

These panels explore the changes and the highlights of the Big Gig by decade, and are illustrated with photos of performers, the grounds, the stages, the crowds and more.

But they are not the whole story, says Barbera.

"It's really image-heavy, so we have a lot of great pictures dating back to the earliest performers all the way up to modern era. We really wanted to have it be a very visual representation of Summerfest," he says.

"And then within that, we also have a number of interesting artifacts, some dating back to early days. So, early tickets, bumper stickers, some of the early promotional stuff. Which, it's interesting to contrast that to all of the things that are out now. We have early stickers, and then we have gadgets from around 2000, like calculators and things like that, that have Summerfest logos on them. All the way up to more modern things, USB drives and all kinds of different stuff. We have a display with just glassware and cups and things like that."

"We also have a photo op," says Barbera. "We have a big crowd scene that people can stand in front of with a microphone and a guitar and get their picture taken, and have their rockstar moment. We have banners hanging up for people to see from the years. We really wanted to try to make it immersive, so that as you came into the center of our building you were really sort of surrounded by Summerfest, very much like being out on the grounds in that regard." 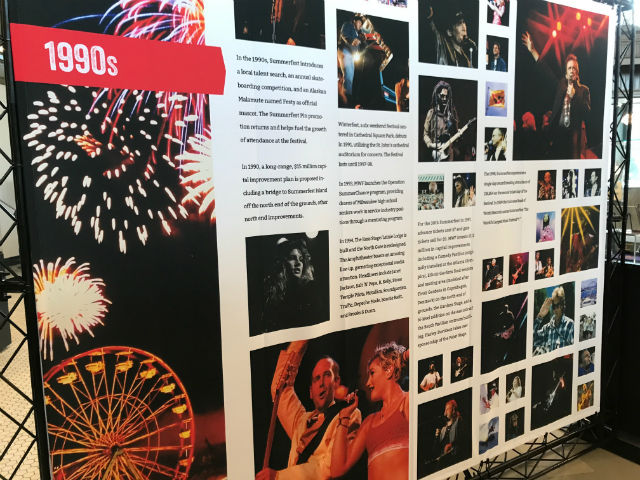 There are two other exhibits as part of the celebration, too.

"What we have here at the Historical Society will be here for the entire summer," says Barbera. "It will be here through the end of September, as it is. And then we have a smaller graphic and visual display that's traveling around the state right now. And then there will be another large, immersive exhibit on the grounds during Summerfest as well. And that will be really technology-heavy, and just a really cool, immersive experience to really get into the history of Summerfest.

"They're all completely different. They're sort of different in terms of scale and look as well. Ours is definitely gonna be more artifacts-heavy, and a little bit more of the history from a text standpoint. The one on the grounds is gonna be very much just, you go in and you're just inundated with Summerfest images and sounds and the visual experiences. And then the one that's traveling the state is just sort of a easy, informative thing that they can pop up in libraries and historical societies and things like that."

"Summerfest 50" runs through Friday, Sept. 29 at the Milwaukee County Historical Society, which is open Monday-Friday, from 9:30 a.m. until 5 p.m. Admission is $7 per person and special group rates are recommended.