For our first two Burning Through Brew City challenges, we've chowed down on two of the globe's hottest peppers - the ghost pepper and the Carolina Reaper. So what food could dare compete with these two legendary flamethrowers? The papaya. 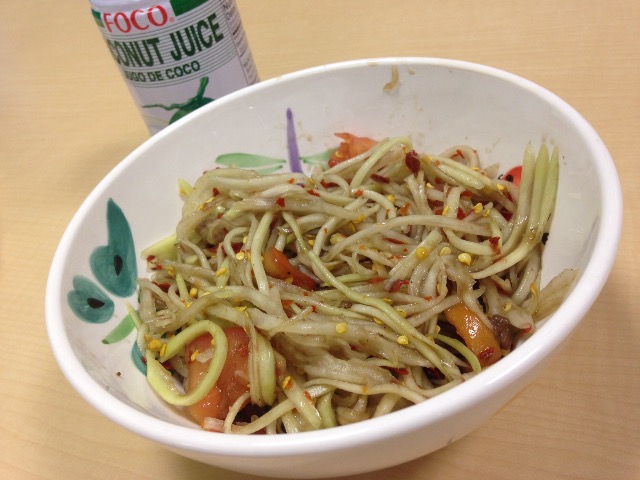 
For our first two Burning Through Brew City challenges, we've chowed down on two of the globe's hottest peppers – the ghost pepper and the Carolina Reaper – and managed to survive, even quite comfortably in the case of the latter. So what could possibly serve as a respectable follow-up? What food could dare compete with these two legendary flamethrowers?

Wait, the ... papaya? Like, the happy tropical melon? What? I mean, look how happy these people are about papaya! And a papaya SALAD, at that? That doesn't even sound like it would scare the palate of an adorable bunny. What could you possibly do to turn the peaceful, pleasant papaya into a punishing purveyor of pain?

Pummel it in a mortar and pestle with a hearty handful of Thai chili peppers, as it turns out. And that's exactly what they do at Asian International Market.

Located at 3401 W. National Ave., the Asian International Market is a little neighborhood grocery store with shelves upon shelves of authentic treats from Southeast Asia, from fresh fruits and veggies to canned goods rare in America to candies and canned beverages spanning all sorts of flavors familiar and unexpected. But one of the most notable things you can find at the cozy, homey market is a small deli station where a few cooks assemble fresh specialties – headlined by its authentic papaya salads, a common Southeast Asian dish.

In the case of the Market's traditional rendition, the deli cook takes a handful of Thai chilis and smashes it all up in a bowl with a whole party of flavors – tomatoes, garlic, tamarind, fish sauce, crab paste, sugar and lime juice – before adding a fistful of thinly shredded unripened papaya and mixing it all together with a thorough pestle pounding (the Thai style includes dried shrimp and chopped peanuts).

The result – which, for the uninitiated, resembles more of a slaw than a classic salad – is then scooped into a Tupperware tub and topped with some crunchy cabbage. You can add some sticky rice on the side, serving as both a compliment to the dish and a delivery device for scooping the salad into your mouth.

There are pre-made tubs of the papaya salad – from all temperatures, mild to very hot – in a nearby fridge. Ordering fresh from the deli is the best option, however, not only because it's a treat to watch all of these seemingly disparate ingredients come together in front of your eyes, but you can also control your particular flavor mix, asking for more sweet or less spicy in the salad. 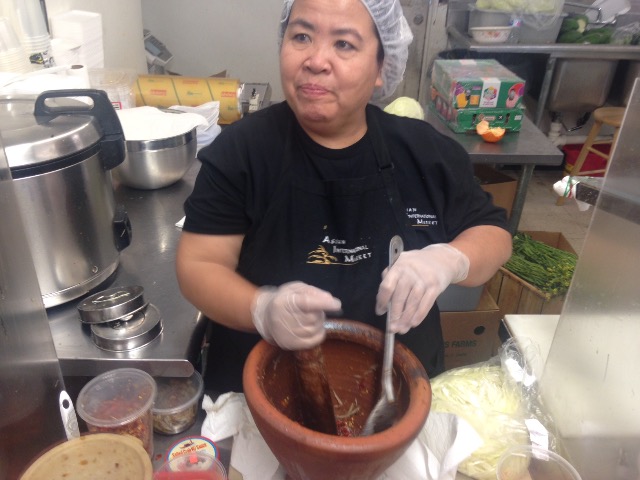 Of course, this isn't Lukewarmly Jaunting Through Brew City, so we went with the very hot edition. Can this mix turn the papaya into a taste-bud pounding? Let's investigate:

Nick: This dish helped inspire this series and, so far, is still the hottest thing I’ve eaten in Milwaukee. It’s the only dish I haven’t been able to finish in one sitting due to heat. Thai chilies aren’t the hottest pepper out there, but the handful of them in this papaya salad means business. The very hot salad burns your tongue immediately and your stomach shortly after. Finally, we have a dish that requires some endurance. You know you’ve hit pay dirt when your cheekbones start sweating. Spicy food lovers, this is your jam.

Matt: I know that photo above seems to show a kindly woman in a kitchen, modestly mashing up some food, but don't be fooled: That is the devil's cook. The Asian International Market's papaya salad roars with brimstone and napalm – not just because it comes in crazily hot (but it does immediately catch fire in the mouth) but because it maintains that fury, as spicy at the first minute as it is five minutes later. It's a full-face sweat inducer, making your cheeks flare up and causing your mouth to salivate in an attempt to extinguish the raging inferno – a feeble attempt.

Nick: Buckle up, you’ll be burning for awhile. Once your mouth cools off and you think you’re out of the woods, the heat settles into your stomach for round two. Between that and the inevitable endorphins spicy food triggers, the rest of the day you’ll know you’re alive.

Matt: This stuff comes in hot and refuses to let up smoking your taste buds – no matter what you attempt. I tried cushioning the blow with a handful of plain sticky rice. Didn't work. I tried washing it out with a glass of water and some soda. DEFINITELY didn't work. I tried some of the fried pork skins the deli chef kindly tossed in saying they might help. A very sweet gesture – DID NOT WORK. You're going to feel like one of Daenerys' dragons for the whole meal.

Nick: Papaya salad should be equally spicy, sweet, salty and sour. Asian International hits that mark every time, even with the very hot version. There are a lot going on here: flavors of tamarind, fish sauce, chili and lime. Crunchy papaya, soft tomatoes, chewy sticky rice (an absolute must side order). When your mouth is burning and think maybe you should take a break, you keep going back for one more bite. It’s that good.

Matt: Considering the unrepentant scalding heat from this papaya salad, it'd better be pretty delicious for me to risk taking more than one bite.

I did. And then I did again. And then, when I got full, I saved the leftovers so I could chow down on some more later.

Even without the spice, it is an explosion of unique, addictive flavors that you simply can't get enough of. The satisfying crunch of the papaya – combined with the unpredictable mix of sweet and savory, extreme and subtle flavors – turned me into Kevin Bacon in "Animal House": Thank you sir, may I have another! You'll spend half the time eating the dish in pain battling the fiery heat and half of the time battling the urge to take yet another bite. And you'll lose both fights.

Nick: Papaya salad is one of my favorite foods. I’ve tried as many in town as I can find and frequently make it at home. Most are good, but Asian International Market’s version is easily the best. The flavors are perfect, the heat is surreal and the hefty portion is only $5. I can’t gush about it enough; it simply does not get better than this.

Matt: I know we're only a few stops in, but this is easily the spiciest dish we've dug into so far. It's heavenly in its hellish heat. But forget even the ungodly spiciness: I don't like papaya, and I don't like salads. And yet, I've come away from this challenge craving Asian International Market's papaya salad. It's a dish that changed my preconceived thoughts about food and my own taste preferences. That's not just a great burn; that's a great dish – period.