Nick and I are always on the lookout for culinary trouble with Burning Through Brew City - and on our latest stop, we found it. Quite literally. 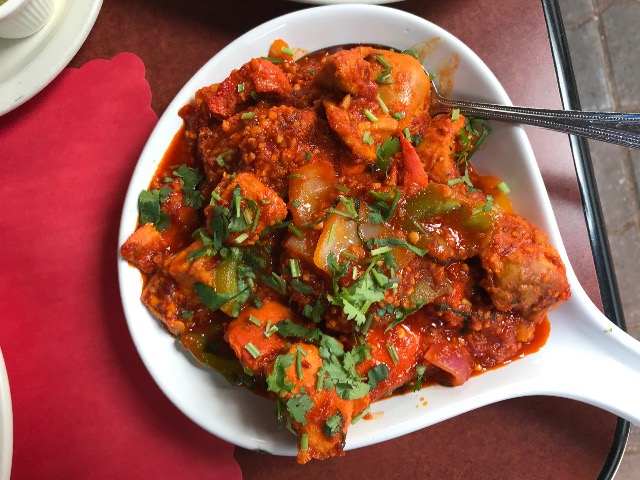 Nick and I are always on the lookout for culinary trouble with Burning Through Brew City – and on our latest stop, we found it. Quite literally.

We've hit a lot of different cultures and cuisines on our spicy excursion – from Italian to Korean, from cajun country to the Chongqing municipality in China, from Nashville to Mexico and whatever pit of hell birthed the Too Hot For a Normal Person wings. But somehow, almost 30 dishes into our jaw-melting journey, we had yet to hit an Indian restaurant – which seemed like a pretty egregious oversight on our part. Indian cuisine, after all, is known for its vibrant spices and big flavors, and that's exactly what this entire series is about.

And what better place to eat our maiden Indian meal than the Indian restaurant recently voted the best in the city in OnMilwaukee's Best of Dining poll: Cafe India. First opened in 2011, the now Brew City Indian staple has two locations: its  main sit-down hub in Bay View and its original Walker's Point takeout mainstay – easily cooking up some of the best bites of food you'll find attached to a gas station in the city. We went with the former, dropping by during a bustling lunch hour – and almost immediately walking into a wall of delicious, absolutely mouth-watering spicy smells. We knew we were in the right place.

A glance at the menu confirmed our first impressions. There's plenty of heat-packed options scattered across the Cafe India menu, from the vindaloo to the red curry madras. But there's only one item on the board that comes with not one but TWO warning peppers next to the dish's name AND has a caution note in bright red lettering warning that it's extra hot. And that dish would be the panga chicken – or the Trouble Chicken. With a name like that, it has to be good – and possibly evil.

So would Cafe India's Trouble Chicken indeed be trouble for my hopes of ever tasting anything other than roasted taste buds ever again? Or would it be a case of more cutely branded bark than spicy bite? Let's dig in!

Nick: Before you dig in, Trouble Chicken smells like its namesake. Bright red with visible pepper seeds, it looks like a killer. The staff will even double check when you order to make sure you're ready for what's coming. It has all the markings of a truly spicy dish – but after a couple bites, I wasn't sure what the big deal was. I didn't find it particularly hot. Thankfully, the heat builds steadily, and toward the middle of the meal, it was clear that Cafe India put together an actually spicy meal well above the Milwaukee Hot line.

Matt: You know those deadly poisonous jungle frogs that are bright red or orange, screaming to all passersby, "DO NOT EAT ME; I WILL KILL YOU"? That's what Trouble Chicken reminded me of when it arrived at our table in its blisteringly red sauce – and that's not even getting into the singeing smell of peppers and spices radiating from the plate. Bodes not so well for my cowardly taste buds and stomach!

Thankfully, however, the dish is far kinder than it looks, smells and sounds. While there are plenty of peppers in the dish, including jalapeños, the Trouble Chicken doesn't have that prickly, little knives jabbing into the palate heat of many of our spiciest, peppery-est dishes, instead working with a much richer, deeper and more complex spicy heat.

Your taste buds will be fine with Trouble Chicken ... but the rest of you? Maybe not so much. This is a full-body spice experience, as your stomach will increasingly feel like you just swallowed a shot from a flamethrower and your brow – and everywhere else – will sweat from the first bite and won't stop. It's not as aggressively fiery as many dishes, and you won't be fanning your mouth or crying from the immediate impact. But you'll definitely feel the heat raising your whole body's temperature – and if you're like me, you'll look and feel like you just ran a marathon after you're done. Hey, a dish that'll satisfyingly fill your stomach AND clean out your pores!

Nick: Given the time it takes to build up, I suppose it makes sense that it also takes awhile to cool back down. The belly burn afterward isn't pronounced enough to be front and center all day, but hours later, I noticed a mild belly burn when someone asked about how hot the meal was.

Matt: Your day won't be ruined by the Trouble Chicken's belly burn. This is by no means a punishing heat, either during or after the meal; in fact, it's almost more of a soothing boil rather than a burn. But your stomach also won't let you forget what you did for several hours after your encounter with Trouble Chicken, giving you a long-lasting simmer in your stomach that reminds you that you're still alive – and that you ate some really good, spicy food today.

Nick: Trouble Chicken is a pretty straightforward dish: boneless chicken in a garlic ginger marinade, tossed in a spicy house sauce with onions and peppers. The chicken is incredibly moist, and there's a little sour acidity to play off of the sweeter onion and pepper notes. The sauce has a long-cooked richness that's good enough to taste by the spoonful (or naan-full) if you're up for the heat that comes with it. It's a well-rounded, classic dish of Indian food with plenty of flavor to go around.

Matt: Much like how Trouble Chicken focuses on delivering a more complete heat, this dish is a complete flavor experience. The sauce is a bright and beautiful cavalcade of flavor, from the rich fire of the peppers and spices to the warm tang of the ginger garlic and even a burst of fruity floral notes from the onions and bell peppers, and the chicken is an ideal delivery device for all these wonderful flavors, cooked to a tender and succulent texture. By the end of our meal, I was desperately mopping up the bowl with naan, refusing to let a single drop of saucy glory go to waste. Don't let yourself get scared away by this dish.

Nick: Very satisfying. Rating spicy restaurant food is difficult because we're here to talk heat (in this case medium-high), but unless you're on a dare, that's just part of the story. So while the dish will end up somewhere in the lower-middle of our listings, it's among the more complete dishes we've had and deserves more notice than its middling ranking below will imply. Forget the numbers! If spicy Indian food aligns with your values and practices, Cafe India's Trouble Chicken is for you.

Matt: The bad news: The Trouble Chicken wasn't that terrifyingly spicy, going for a more growing, full-bodied as well as full-body heat rather than a showy, capsaicin-forward, pain-inducing inferno. The good news? That just means I was able to eat more this absolutely delicious dish. The only trouble you'll have with this Trouble Chicken is stopping yourself from ordering another bowl.