But would this brothy beast of a dish truly be a hot pot? Or would this Szechuan specialty merely land in Milwaukee hot territory? Let's dig in on this new Burning Through Brew City stop. 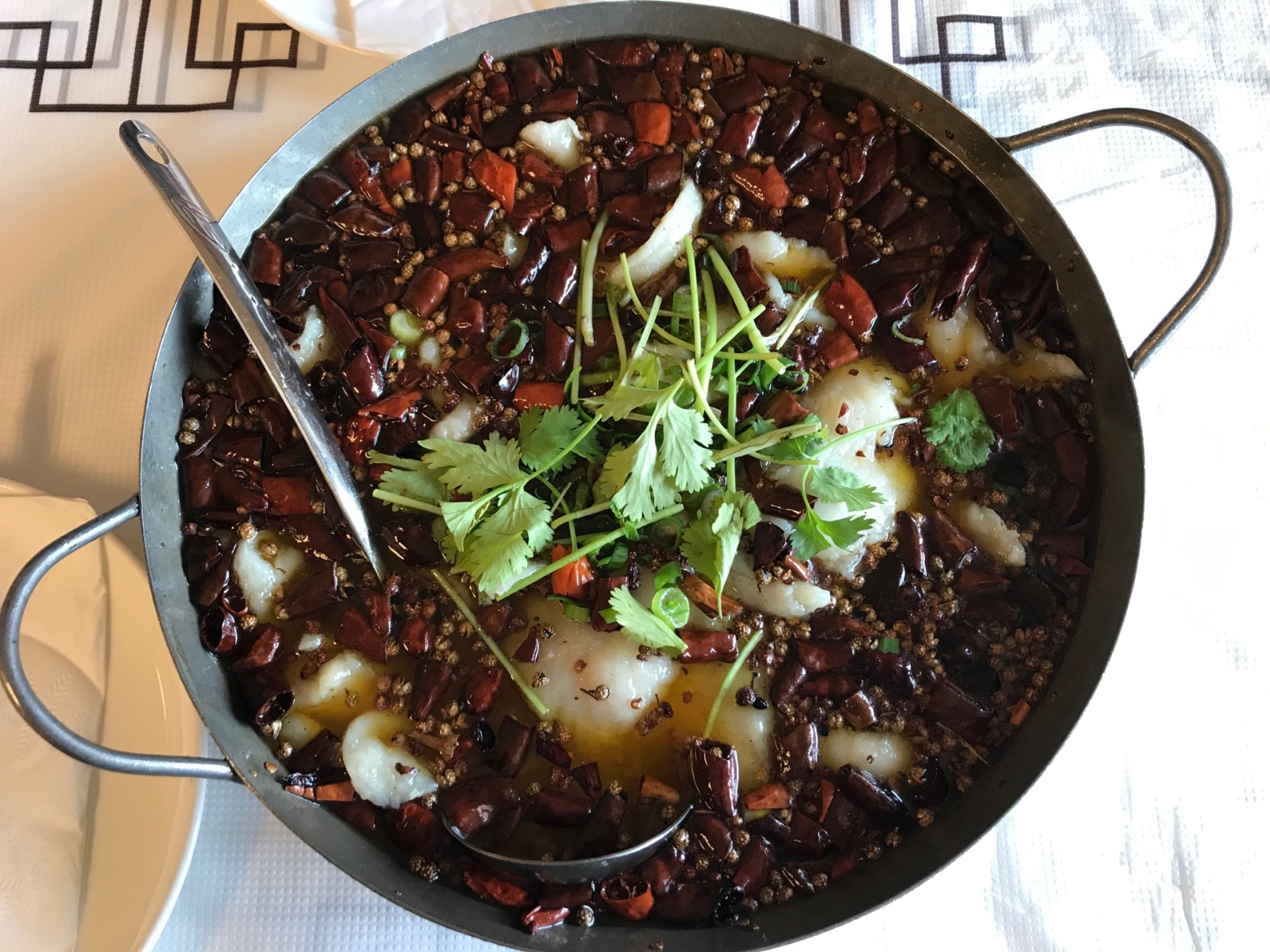 If you know OnMilwaukee dining dynamo Lori Fredrich, you've likely had Sze Chuan recommended to you. And when a food expert like Lori can't wait to tell you about a restaurant she loves, you go as soon as possible.

Even though the West Allis restaurant, found at 11102 W. National Ave., has only been open for close to two years, it's built a vocal audience of adventurous foodies, happy locals and, yes, online dining writers, all looking for authentic and wildly flavorful eats. And that's what you'll find at Sze Chuan, run by chefs and Chengdu province natives Luo Shungui and Sun Yin. 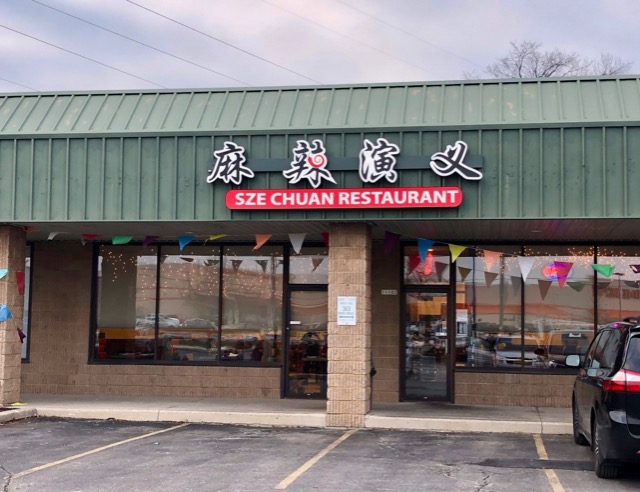 You can find plenty of Chinese-American standards on its legitimate book of a menu, from crab rangoon and various egg rolls on the appetizer section to beef chop suey and General Tso's chicken. Those are all fine and tasty, for sure – but if you're going to a restaurant called Sze Chuan, run by chefs from the Szechuan region of China, specializing in Szechuan cuisine, you should probably pay some attention to the menu's Szechuan specialties. And you will not regret that choice considering the wide range of flavors and dishes it contains – including cumin pork knuckle to fatty beef in a sour chili broth and spare ribs in a garlic chili sauce.

It was in this section where we found our spicy target for our latest Burning Through Brew City: the Fei Teng Fish, one of the restaurant's spiciest dishes as well as one of its most popular according to our astute waitress. Of course, after looking at the plethora of tempting plates listed off in the menu, we couldn't just choose one dish so we also ordered the Szechuan spicy pork dumplings and a beef dry pot – both also highly rated when it came to heat, both also insanely delicious. Pro tip after visiting Sze Chuan: Considering the dish sizes and the amount of delicious options on the menu, bring a crowd when you go – or, if you're selfish and don't want to share (guilty as charged), just bring your appetite.

But from the moment the giant lapping dish was placed in front of us, it was clear the Fei Teng Fish – tender fish fillets, sprouts and glassy noodles hidden underneath a bath of light yet rich broth with chili oil, dried chilies and a crowd of infamously cooling Szechuan peppercorns – was easily the star option for our spice hunt, something even more apparent after actually tasting the dish as well.

But would this brothy beast of a dish truly be a hot pot? Or would this Szechuan specialty merely land in Milwaukee hot territory? Let's dig in and see!

Nick: (*pushes up glasses*) Technically, the only heat source in Fei Teng Fish is the classic tien tsin pepper – aka Chinese Red. It's a mid-range pepper as far as heat goes (about 50,000 SHU) and doesn't carry a lot of flavor with it. Fei Teng Fish, and so many Szechuan dishes, are known for heat because the sheer number of peppers used, each one bringing the overall heat of the dish closer to that 50k number.

Another common addition in Szechuan cuisine is the Szechuan peppercorn. It doesn't add any heat as far as capsaicin is concerned, but it flips the table on your tastebuds, and the extra sensation of lemony-electric, chilling numbness accentuates, if not magnifies, the tien tsin's heat. Fei Teng isn't a one-bite powerhouse, but the dish (especially if you eat the peppers directly) is going to build to a solid, satisfying heat.

Matt: There may be other peppers and spices in the Fei Teng Fish – the broth is extremely flavorful without ever cracking off too much fire – but the only one that truly matters is the Szechuan peppercorn, not because of heat but because of its absolutely bonkers cooling power.

Take a bite of one of these little funky flavor bombs – and considering the pot is utterly swimming with them, it'll be impossible not to – and you'll be utterly baffled as to how to describe the sensation. The flavor itself is like lemon gunpowder, followed by a bizarre numbing feeling tingling your tongue. We had a similar experience with Huan Xi's hot pot earlier on our quest, but considering the number of peppercorns you're dealing with in the Fei Teng Fish, it's a much stronger and vivid dose this time.

It's a fascinating food experience, feeling your mouth spark and tingle and try to grasp just what the heck is happening to it – before taking another bite to feel it all over again.

Nick: I lack the vocabulary to describe how much I enjoyed this meal. I've rewritten this paragraph a few times, and every one has fallen pathetically, even offensively, short of the mark. The fish was firm and flaky, somehow buttery but sharp, hot and a little sour. The aroma was earthy and toasted, but the taste was fresh and invigorating. We found sprouts and celophane noodles at the bottom, hidden until the end and steeped in flavor.

After filming our Facebook Lives, Matt and I usually have a good chat about life, work and whatever else comes up. This time, we just ate and ate and ate, only ever talking about how good the food was and if the other would pass the dish back over.

Matt: The Szechuan peppercorns are the flavor star of the show, that numbing and buzzing sensation definitely the topic everyone's going to be talking about around the table. But this is by no means a one-trick dish. The broth is warm and soothing with a little spark of spice from tien tsin peppers. There's a collection of sprouts and noodles at the bottom for some bonus texture.

And then there's the fish – oh my lord, this fish. It's satisfyingly meaty and lusciously buttery, falling apart in your chopsticks but still flaky, chewy, almost tart and, in the end, just plain addictive. From the unique flavors to the delectable textures, the Fei  Teng Fish is a dish I just couldn't get enough of – which is impressive considering it comes out in a giant tub. But it could've come out in a literal bathtub and I still would've demanded more – it's that good.

Nick: When Lori first tried Sze Chuan, she sent me a picture of the spicy dumplings with a note that I absolutely HAD to go. It took me all year and now I want my year back. Everything about our Sze Chuan experience, from service to meal to heat, was outstanding. Fei Teng Fish isn't going to top the Burning Through Brew City charts on heat alone, but it'd be up there if we ranked on the overall experience section. On the way out, our server handed me a menu with the hottest dishes and other suggestions circled – and I can't wait to use it as a road map on frequent return visits.

Matt: It's times like these that our heat index below is woefully under-equipped to fully appreciate this dish. Is it remotely close to the spiciest dish in Milwaukee? Not really – even those who live in the "Milwaukee hot" range could comfortably knock this back without breaking a literal sweat. But is it the most unique spicy dish in Milwaukee? Quite possibly. The way this dish and its hailstorm of Szechuan peppercorns plays with your taste buds is unlike anything else you've tasted, electrocuting your palate and thrilling your appetite.

Don't let its ranking around the 20s below fool you: This is one of the most memorable spice experiences you can find in Milwaukee.