Burning Through Brew City is back! Would Merge's Volcano Korean fried chicken gives our taste buds a warm welcome back - or something much, much hotter? Let's dig in! 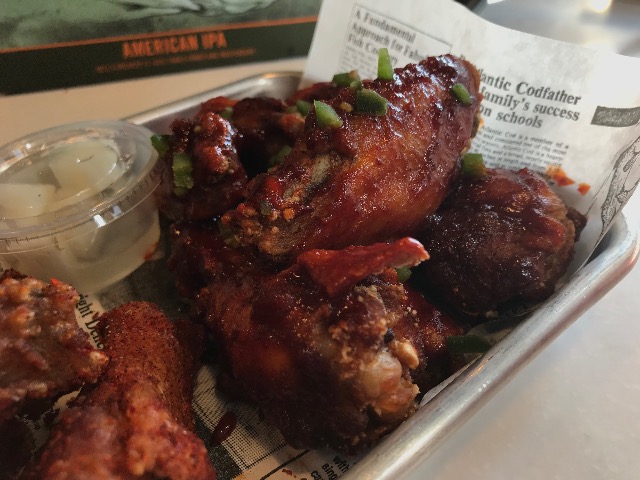 The summer heat is back – and so is the heat of Burning Through Brew City. Indeed, we're back! It's been awhile! The last time you saw us was probably all the way back in March at WMSE's Rockabilly Chili, either on Facebook Live or, in my case, on the floor of the Kern Center surrounded by concerned volunteers and maybe a paramedic.

You see, for the second straight year, Nick and I dropped by the Rockabilly Chili fundraiser to sample some of the city's finest stews – and, of course, hunt for the spiciest contenders of the bunch. We toured the dozens upon dozens of tasty options and found five strong, uniquely heated chilis to gulp down for our usual Facebook Live segment – but unfortunately, I left out a key part of eating exceptionally spicy foods: eating something BEFOREHAND so your stomach and heart don't start actively rebelling against your body. And lo, shortly after we logged off, my stomach and heart began actively rebelling against my body, sending me spilling to the floor, woozy, losing feeling in my hands and wondering, "Huh, is this what a heart attack feels like?"

Thankfully, it wasn't; it was just some very intense and potent heartburn, and I was back on my feet within the hour. But still, when you're laying on the ground in public, head in the hands of a kindly stranger/former nurse, surrounded by friends talking to you in hushed and concerned tones, you start thinking that maybe, just maybe, you should take it a bit easier on your digestive system for a bit.

Two months and a newly refreshed stomach to scald later, I'm ready to head back with Nick on our quest to eat the city's spiciest dishes. (And to eat bread or something beforehand ... moron.) Our first stop back on the road to sweet, delicious hell: Merge.

Found at 1932 E. Kenilworth Pl. in the former Yield and Yokohama space, Merge  brought something different and unique to the East Side when it opened last November – which is saying something considering the bar for "different and unique" is set pretty high with painting, mini-golf, an underground bowling alley, a back alley speakeasy and axe-throwing all around the block. But that's exactly what Merge did when it opened as Milwaukee's first KFC bar – and while it may be finger-lickin' good, this ain't the Kentucky Colonel's KFC. This is Korean fried chicken, a process that features double-frying your wings, resulting in a delectable, addictively crispy and crunchy outer skin. Take that, Sanders. (Fun fact: Did you know he was actually sued by KFC for libel because he very openly disliked what the company was doing to his food? He'd probably have a heart attack from a KFC Double Down – and not in the usual way you get a heart attack from a KFC Double Down.) 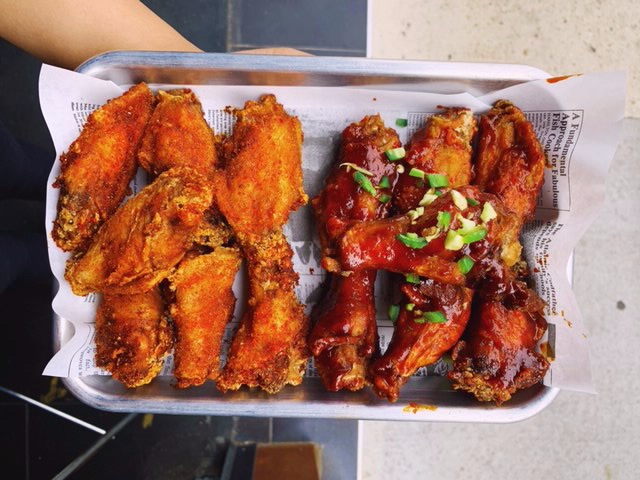 Anyways, back to the good stuff. Merge then takes its crackling little pebbles of meaty perfection, covers them in the sauce of your choosing and serves them up in the restaurant's fun, modern atmosphere featuring retro video games on its screens – dibs on "Mario Kart 64" – and big eye-catching murals on the walls. The sauces range from bourbon barbecue to honey mustard, Nashville hot chicken to Asian-inspired flavors like soy garlic and sweet and spicy.

But of course, the concoction that caught our eyes and buds was the Volcano sauce, an extra spicy Korean chili sauce. And while you can get this stuff slathered on some of the other inventive items on Merge's menu – such as the chicken tacos, the crispy fried cauliflower appetizer or the Volcano chicken cheesesteak – when you go to a Korean fried chicken hot spot, you get the Korean fried chicken.

So would Merge's Volcano Korean fried chicken gives our taste buds a warm welcome back – or something much, much hotter? Let's dig in!

Nick: Merge's Volcano sauce uses capsaicin powder to fuel its burn, which has a couple of interesting effects. First, I didn't detect the usual aftertaste we see in extract-based sauces. Second, it might be better named Rocket Sauce for its multi-stage burn. It's immediately kinda-hot, like a warning shot across the bow. Finishing the first wing, you've got a solid, steady burn going. But by the time you finish your order, it's grown to a satisfying roar that pulls up just short of a stinging fresh pepper burn. It peaks out at a level that's great if you're always looking for the spicy menu items but aren't looking for a challenge-level plate of wings.

Matt: Considering my recent bodily warfare, perhaps it's best that Nick and I restart our journey with a fairly tame entry. That's not to say these Volcano Korean fried chicken wings are flavorless – far from it – but they're little to be intimidated by, even with the added kick from the capsaicin powder. The meaty wings and the rest of the flavors mixed in the sauce give your mouth too much to taste to get overly focused on the heat – though it is definitely present, a slowly rising and radiating burn that warms your taste buds and moistens your brow, threatening to get pin-pricklingly spicy like a habanero or more capsaicin-heavy sauce but without quite reaching those thermometer-breaking highs. I want another batch of these wings – but the heat is more a passenger on this ride than the driver.

Nick: It didn't take long for the mouth burn to subside, but the Volcano rocket evolved into a warm belly for a few hours and was definitely present for a final stage ... later.

Matt: While the heat definitely grows and escalates, the burn will basically be gone by the time you're done racing a few laps on Rainbow Road.

Nick: Remove that multi-stage heat, and at it's heart, it's a pretty tame sweet-and-spicy sauce. In that, the development focus was clearly on flavor. The gochujang and oyster sauce combo give it a darker color than the fire engine red you see on standard hot wings, and combine for a richer, more satisfying taste as well. I love gochujang, and the application here is like a barbecue sauce with a distinctly Asian vibe. It's well-rounded enough that no big notes stand out. A little salty, a little sweet, a little umami kick. Very rich and very satisfying to eat.

Matt: The heat of the Volcano sauce isn't as much the star as the overall flavor profile, which is this fascinating, full-bodied, umami-rich experience that ricochets around your taste buds like a bouncy ball – one that's been gently lit on fire, thanks to the extra boost of the capsaicin. Sort of salty, sort of sweet, sort of fishy, sort of savory, the sticky sauce is an explosive flavor experience – just maybe not in the way you're predicting from the inflammatory name. Slather that sauce – and its unexpected but not unwelcome tacky texture – onto meaty, juicy chicken wings, featuring crispy skin that pops with each bite thanks to the Korean frying process, and you've got a wing that sings.

Nick: This is a great example of proper use of capsaicin powder or extract: take a thing that tastes good and make it hot, not the other way around. Merge took a crispy Korean fried chicken wing, slathered it in a rich and tasty sauce, and bumped the heat up. They're super satisfying to eat and definitely worth a shot if you haven't tried them yet.

Matt: In the world of chicken wings, it's hard to stand out. Merge's may not have the ribald and reckless burn of Jonny Hammers' firecrackers – or even the habanero sauce down the block at Hooligan's – nor the longtime legacy of Points East Pub's meaty nuggets just a mile over, but they might just be the most uniquely flavorful hot wings in the area. You'll remember these wings, no milk or medical care necessary – a welcome result for me!