Dreams recently turned into nightmares, as Taco Bell introduced a hellish twist on one of its dishes: a Reaper Ranch Quesarita, set aflame with a Carolina Reaper ranch sauce. And, for some odd reason, they're testing this spicy hellspawn in Milwaukee. 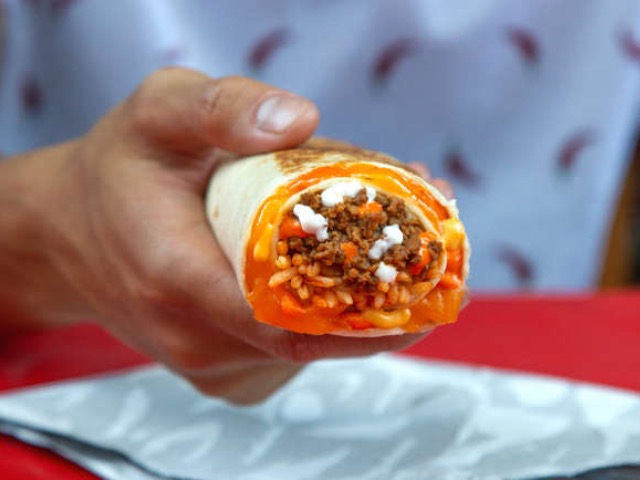 
All hail the Frankenstein-ian culinary engineers at Taco Bell.

Most mere mortals would inevitably be defeated by the mission to create as many dishes as possible using just beef, cheese, rice, lettuce and tortillas. But not the geniuses at Taco Bell. No, they see those limited ingredients and see unlimited possibilities.

These people see Mexican cuisine and see nothing but a bucket of LEGO bricks to arrange and rearrange into anything and everything they can imagine. A taco inside a taco? Of course. A burrito with popping spices? Don't even know what that is, but sure; can't be any less healthy for my body than a usual Taco Bell menu item. A double chalupa? Two tickets for Chalupa 2: Chalupa Harder, please!

But perhaps their most impressive engineering feat is the quesarito, a burrito wrapped in a quesadilla. It doesn't technically seem possible – but anything is possible at Taco Bell, where dreams become reality wrapped in nacho cheese and Doritos dust.

And, for some odd reason, they've decided to test this supposed spicy hellspawn ... in Milwaukee?

As the writer of a spicy food column based in Milwaukee, I appreciate Taco Bell's fiery favor – but Milwaukee is not exactly known for its fondness for spicy foods. There's a reason why Nick and I call tame spicy dishes "Milwaukee hot." Whether it comes to our weather or our food, we don't bring much heat. This is the land of beer, cheese and milk – you know, the stuff you use to STOP hot food – so to use our sensitive palates to test an extremely spicy item, one utilizing the hottest pepper on the planet, is ... a choice. But it's a choice I appreciate as it opened the door for a Burning Through Brew City Bonus entry for Nick and me.

First, however, I had to find damned things – a quest slightly harder than expected. I called one Taco Bell to make sure that they actually had the special item in stock (there are few things sadder in life than calling a fast food restaurant), and they said they did. Jackpot! So I drove there, wove into the drive-thru and ordered the Reaper Ranch Quesarito ... only to find out that they didn't have the sauce to make it. If you do not have the Reaper Ranch sauce to make the Reaper Ranch Quesarito, then YOU DO NOT HAVE THE REAPER RANCH QUESARITO. Then you just have a quesarito – not a bad situation to find yourself in, unless you are writing an article about spicy foods, that is.

Thankfully, the next Taco Bell locale had the dish, so I snagged one of each kind – because if there's one thing I love more than burning my insides, it's burning money – and brought it back to Nick at Burning Through Brew City HQ.

So would the Taco Bell Reaper Ranch Quesarito monstrosity result in a four-alarm fire? Or would it crack right away like the Liberty Bell? Let's dive in!

Nick: The easy prediction, shared by Matt and I, was that the Reaper Ranch Quesarito would be satisfying on a basic level, but ultimately unfulfilling. The quesarito's fillings were Taco Bell standard – steak, rice, beans, cheese, etc. – and tasted much in they way they do in whatever configuration the mad food scientists behind Taco Bell bring to life. (Though I have to tip my hat to the ability to add another tortilla, a top-five favorite food for me, to a burrito just because you can.) It tasted exactly like you assume it will. If you love it, you love it.

We also predicted that the heat would be underwhelming. Pretty unlikely that a major fast food chain is going to push the needle enough to register; despite our jokes, "Milwaukee hot" is not remotely a Milwaukee-specific occurrence.

Though in general we were correct, the Reaper Ranch was nonetheless hotter than I expected. Like the wings from O'Brien's, there was a delay before the spice kicked in – just long enough to think there was nothing there. Dulled at least in part by ranch, Taco Bell's reaper sauce lacked the pepper's sharp sting but did register something like a "oh hey there it is" expression from each of us. Enough to call it spicy, not enough to really BE spicy. The Diablo sauce (also a new one for me) was hotter to me than the Reaper Ranch, but adding a packet at a time surely has something to do with that.

All in all, the Reaper Ranch Quesarito was about what you'd expect: fast (but no so fast), cheap (but not that cheap), filling (but why didn't I order two?) and hot (but not, like, hot).

Matt: Even with all the creativity on display on the menu, there is only one flavor at Taco Bell – and it is Taco Bell. Some kind of slightly spiced beefy, cheesy, melty, crispy satisfying-ness that tastes neither of Tex, nor Mex, but of Taco Bell. They could cook up something involving durian and truffles, and you'd still take a bite and say, "Yep, that tastes like Taco Bell." And even with the flaming reinforcements of the Reaper Ranch sauce, this new quesarito doesn't change that.

In fairness, you can tell it's got some bonus spice to it. After a few seconds, the flavor sauce definitely comes in, more of a tart burn than you've probably ever gotten from the restaurant. It's definitely the spiciest dish you can probably find in the world of fast food – but that's a little bit like being the most authentically Mexican dish at Taco Bell. It's not saying much.

The ranch mutes the pepper's heat significantly – and even if that wasn't the case, you've got a lot of melty cheese and rice to help cushion the blow. If you're looking for a little extra heat without having to pack on the Diablo or Fire sauce packets, you can go with the Reaper Ranch Quesarito, but it still won't be much of a challenge. You won't be desperate for a sip from your Baja Blast (though you might be simply because Baja Blast is LIQUID MANNA FROM HEAVEN).

As a dish, it's still tasty because that one flavor at Taco Bell is deviously delicious. Meat and cheese wrapped in a convenient pocket of chewy dough will never not hit the spot. But as a spicy dish, it falls far of the mark, a little burn that doesn't go a long way. It won't push your taste buds – but then again, if you wanted to push your palate, you wouldn't be at Taco Bell.