Desperate times call for desperate measures. So what better way to warm up during one of the coldest streaks in modern history than with a bowl of the most notorious, lethally spicy dishes on the internet. 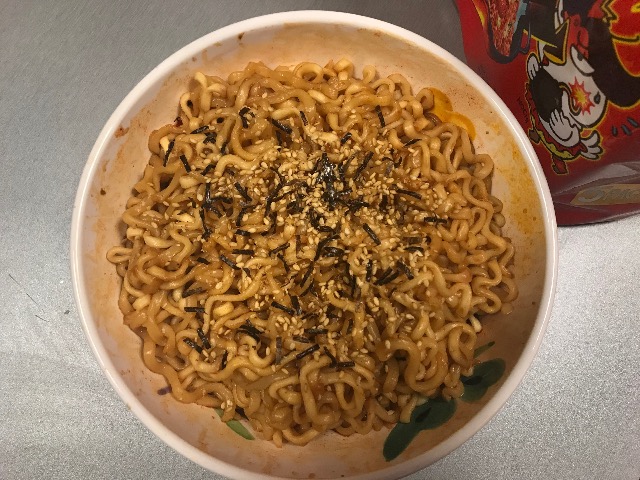 Desperate times call for desperate measures. So what better way to warm up during one of the coldest streaks in modern history than with a bowl of the most notorious, lethally spicy dishes on the internet. Well, OK, just a blanket would be better. Or a nice fire. Or just layering on some sweaters. Actually why are we doing this to ourselves?

Well, we're doing it to ourselves because, for the past few years, the internet's been doing it to itself. Spicy food challenges are nothing new on them interwebs, found somewhere next to cat posts and unboxing videos in the pantheon of easy ways to snag instant clicks. The latest version of this capsaicin-fueled craze was the Fire Noodle Challenge, in which people of all palates cooked up a bowl of this very particular brand of South Korean buldak ramen and chowed down with screaming, crying, mouth-singeing results. And considering our not-so-respectable place as the Brew City's leading heat seekers (aren't you proud, ma? I eat spicy food and cry on camera for a living!), Nick and I figured it was our turn to try the supposed nuclear noodles.

Our kind editorial director Carolynn snagged us a few bowls of the ramen on Amazon; as you'd expect for a South Korean product, the labeling is mostly in its native language, but one of the few English labels proudly claims, alongside two demon peppers, that the noodle dish contains "2x spicy" – which is frankly two more spicys than preferred. Add in the bright poison-frog colored packaging and fire-spitting bird dragon holding a bomb on the cover, and we could tell we had the right stuff to make a wrong decision. (There's various other packages too, though I believe this type is the most intense. If we're wrong, I guess we'll have to do it again! WOO! *cries*)

Will we defeat this combustable culinary creation? And, even more impression, will it defeat this legendary frosty weather? Let's take a (frost)bite of the Fire Noodle Challenge – and then goad our co-workers into taking a spoonful too! We're monsters!

(Note: We originally sampled the ramen last week when the weather was merely cold as opposed to reenacting "The Day After Tomorrow." But here's to hoping the mere memory of this flaming hot dish will put the feeling of warmth back into our bodies – without putting the fear of this dish back into taste buds.)

In conclusion, yes, the hot ramen is hot – but the bigger surprise is that it's pretty tasty too! The ramen's technically chicken flavored – which is like biting into a burning napalmed tree branch and saying, sure, it's mesquite flavored – but underneath all the blaze it does have that salty, savory and meaty taste of instant ramen that's absurdly addictive. Add in the crave-able heat factor, that gotta-have-another-bite, fight fire with fire appeal of spicy food, and you've got a dish that I kept digging back into well after my first bite ... which also probably tells you that it wasn't THAT outrageously hot.

Don't get me wrong: It's definitely got some serious singe to it – certainly more so than most packaged "hot" foods, since they still want to market to the most people as possible, which means not scaring them away. Upon my first bite, I coughed from the instant burn, a sensation that didn't go away for quite a bit. Despite some very quick sweetness up front, it's a pure extract-based heat for sure, which means it comes in very hot with not much to hide or cushion the burn. If this was a part of our regular Burning Through Brew City quest and not just a bonus detour, it would likely rank in the top 10 – though on the lower end.

For most palates, it'll definitely be a challenge, and even heat hunters like Nick and I had to take a moment and consider our life choices. But calm down, YouTube; it's nothing worth screaming about.