So does this Honky Tonk Hell chicken sandwich from Camino provide enough heat to help you burn through Hump Day? Or does the Walker's Point eatery's take on a Nashville specialty taste more Milwaukee Hot? Let's dig in! 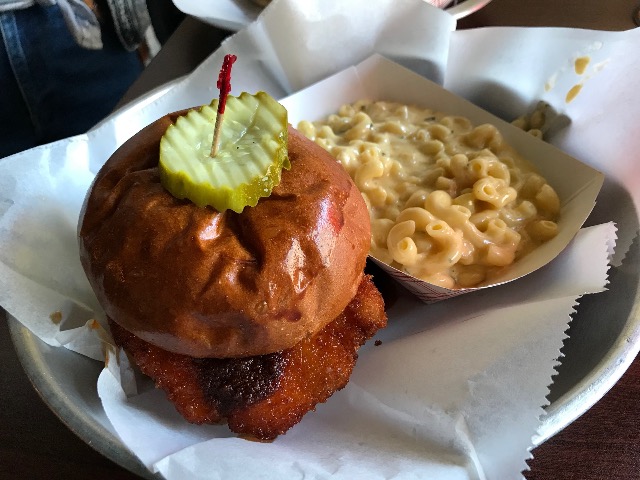 Wednesdays suck. You're exhausted from the last two days of work, and even though you're halfway through the week, that still needs there's HALF OF A WEEK. What's worse: wandering through an empty desert or seeing an oasis that's close enough to be seen but not close enough to be any help? Sorry, talking Geico camel, but Hump Day is dumb.

Thankfully, Camino, found at 434 S. 2nd St. in Walker's Point, has a deal to make Wednesdays a little less hellish. How? By making them a little MORE hellish. 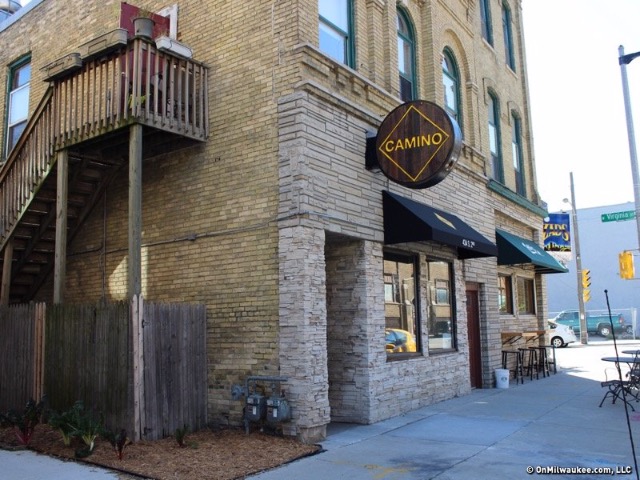 Just about every day of the week, you can find absolutely delicious and inventive pub grub – specifically their scrumptious burgers – and tasty craft brews at Camino. But on Wednesdays, Camino goes country with its Honky Tonk Hell special, featuring country music blaring from the speakers – and none of those "flat-bellied air humpers," as the Outlaw Country SiriusXM station calls Luke Bryan, Dierks Bentley and most of the Top 40 – and Jack Daniels drink specials.

The main course, however, is its Nashville chicken sandwich, featuring a meaty slab of cayenne pepper-doused, neon orange chicken in between a brioche bun with some pickles to help cool each blazing bite.

Then again, considering this never-ending, polar vortex-haunted winter, I'll take all the heat that I can get.

So does this Honky Tonk Hell chicken sandwich provide enough heat to help you burn through Hump Day? Or does Camino's take on a Nashville specialty taste more Milwaukee Hot™? (Which is to say not hot at all.) Let's dig in!

Nick: Warned that the heat would come on late, I didn't expect much from the first few bites. The oily, smoky base was there, setting the table for the building heat. A couple bites later, in the middle where the Nashville hot sauce was a bit thicker, surely it would arrive. In that middle, it built to a level somewhere around the Milwaukee Hot™ line. From there on, it never really got the sustained burn I was hoping for.

Matt: Maybe Milwaukee diners' palates can't handle the raging inferno of the real thing, so restaurants tug on the reins. Maybe my personal taste buds were just raw and innocent when I first tried the Tennessee treat in Nashville and now, after a year and a half of heat-seeking, they demand more than before. Maybe it was just the endorphins racing from trying a signature dish in an exciting new city, and the memory gives more power than the real thing. But after three attempts, save for Hot Head's 414 Fire (which, reminder, was created after we said their original version was a walk on the mild side), I just can't find that true Nashville hot chicken firepower in Brew City.

And you can make that four after Camino's tasty but tame take.

There's definitely a burn to the sauce, a late burst of that classic cayenne pepper singe that you crave emerging from an intriguingly sweet heat to start. Its presence is definitely felt, but unfortunately not for as long as that pure, powerful, oily, all-consuming, napalm-esque fire you find in Music City. Plus, even if you do get a particularly feisty bite of the spice, the chewy brioche helps soften the blow of the burn. So when it comes to heat, even for delicate palates, this is one trip to hell that you don't need to be concerned about.

Nick: My brain remembered the good meal long after my mouth forgot the heat.

Matt: Authentic Nashville hot chicken will sizzle in your stomach and bubble in your boiler for an entire country set. Camino's take didn't survive much longer than a song, a mild belly burn on the way out of the restaurant but otherwise a short-lived one-hit wonder.

Nick: Heat aside, Camino's offering is a delicious sandwich and a paragon of balance. Light, crunchy breading surrounds a juicy chicken breast. The brioche bun adds bite but isn't weighty. Sweet pickles offset the smoky spice of the Nashville hot sauce. It's a great sandwich – and it comes with mac and cheese on the side? Yes, please.

Matt: This sandwich may not have the heat of Nashville hot chicken, but it definitely has the flavor – and then some. The meat itself is succulent and juicy, with a dash of sweetness that cuts through the spicy and savory flavors at work, while the sauce has that signature smokey cayenne. The secret weapon, however? That brioche bun. It may help extinguish the spice, but it also brings its own personality to the party with that delicious soft, pillowy, chew-tastic texture. Typically, the only delivery device Nashville hot chicken needs is my hands, but this bread has me thinking otherwise.

Nick: Outlaw Country, Nashville hot chicken and Jack Daniels: Welcome to Honky Tonk Hell. This is my kind of promotion. I've always had a good experience at Camino – you HAVE to try the burger special – and this was no exception. I'd (basically always) like to see a more fiery sauce, but Camino's Nashville hot chicken sandwich is a tasty option definitely worth trying out.

Matt: If you a hot, authentically addictive, ferociously fiery order of Nashville hot chicken, call in sick to work, hop in your car, take an eight hour drive down to Music City and grab yourself some burn-basted bird. It's warmer and sunnier down there right now, anyways. But if you simply want a really, truly tasty and flavorful chicken sandwich (a tricky find!) served with a side of creamy mac and cheese and a lively yet relaxing atmosphere that'll kick away any Hump Day blues, Camino needs to be your destination. Get on this highway to (Honky Tonk) hell.