Nick and Matt spent the last month taking little detours on their quest for capsaicin, but as it turns out, one of those brief mouth-blistering diversions actually took them right to our next Burning Through Brew City destination. 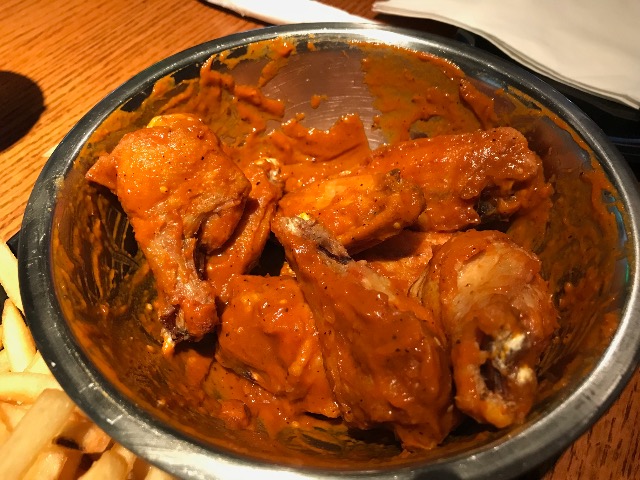 Nick and I spent the last month taking little detours on our quest for capsaicin, but as it turns out, one of those brief mouth-blistering diversions actually took us right to our next Burning Through Brew City destination.

Last month, we took a big bean-filled bite out of the WMSE Rockabilly Chili fundraiser – and while Lakefront Brewery earned the people's vote as the hottest chili (one of the most ridiculous things I've ever heard) and Good Harvest scalded its way into Nick and I's hearts, Hooligan's chili put forward an impressive effort. In fact, one of the only reasons why Hooligan's didn't finish higher on our ballots was because it wasn't the chili itself that was bringing the burn – it was its special spicy habanero sauce that was available as a topping and possibly made in the pit of an active volcano. Thankfully, the sauce wasn't just a Rockabilly Chili special, but a regular menu option on the bar's chicken wings. So obviously, we would have to return – and for real next time.

And that's how a little one-off lark turned into Hooligan's landing officially on the Burning Through Brew City hot seat.

But really, we would've searched for any reason to drop by a self-proclaimed "super bar" (a reference to Hooligan's days of allowing patrons to drink on location or take their beverage on the road, not just a really cool name for a tavern). While the East Side has seen many changes over the past few years, Hooligan's has stayed a cozy constant for almost a century, opening at 2017 E. North Ave. back in 1936.

Well, cozy ... unless you attempt to inhale an order of Hooligan's chicken wings covered in its homemade habanero sauce. At least that's what Nick and I learned when we stopped by the East Side hotspot.

Nick: The wings burn hot and quick, rising well above the Milwaukee-hot line. It's a sharp burn that stings the mouth more than the stomach. I'd call it a high-middle heat; you're (probably) going to finish them, but you might have to push through.

Matt: You know when you can smell how hot a dish is before you even take a bite? Yep, that's Hooligan's habanero hot wings. These glowing orange bad boys come in hot, knocking you back immediately with a sharp, quick, stinging burn that left me snotty, sweaty and covered in sauce. It was very graceful and dignified.

Thankfully they're more of an instant flamethrower than a building inferno, so it's not a lethal heat. I did manage to finish the bowl, but I definitely needed a few breaks while barreling through them, all the while staring off into the distance as I wondered why I did this to myself.

Nick: The fire burns bright, but quickly. I was actually a little surprised by how soon it died down. Given the heat, I expected to feel a familiar sting for a while, but in the end, the show was over by the time we left. Not the worst thing, really.

Matt: There's a mild belly sizzle, but otherwise these wings burn out decently fast – thankfully. But they leave a memorable char. The wings also blessedly come with a side of French fries that I used as fire blanket to put out the flames. Much thanks to Hooligan's for serving these little devils with a bonus fire deterrent.

Nick: The wings themselves were meaty and crispy – even Carolynn's sauceless wings were good, if unexciting. The habenero sauce's flavor is pretty straightforward – all habenero, all the time. Lucky for me, I love the flavor of habeneros. There's something unique and not at all pepper-like that comes along for the heat ride that I really enjoy.

Matt: We actually got to sample some plain wings as well, and while the wings were satisfyingly meaty and juicy with a delectable crunch, the sauce you choose definitely does the heavy lifting when it comes to flavor. Luckily, the habanero sauce is up to the task, bringing an intense peppery bite every time you gnaw down on a morsel (though it did dampen the crispiness of the coating, which is why I will always be a believer in dry rub) with that bonus green habanero tang. Nick keeps calling that flavor "floral," but unless he's referring to the taste of a forest fire, he's using the wrong F-word to describe it.

Nick: Good wings in a tasty sauce with plenty of heat? You really can't go wrong with that lineup. Whether you're the type to seek out the hottest wings around – or still working your way to it – Hooligan's habenero wings have what you need.

Matt: Are you a fan of a hot wings but finding the spice isn't up snuff anymore? Let Hooligan's habanero wings take you to a new level of heat. It's a no-frills classic wing with an bonus burst of burn that's up there with some of the spiciest stuff we've tried so far on this quest. In fact, the only thing hotter than these wings was the heated debate Nick and I had trying to decide whether or not Hooligan's sizzling snacks ranked above Red Rock Saloon's ghost pepper ones – the first thing we tried for Burning Through Brew City, so it's had to compare. Perhaps a revisit and very dramatic spicy food showdown will be necessary ...