After our first test of Hot Head's spice level landed a little lukewarm, the Bay View restaurant actually went back to the kitchen and challenged us with a new hellish concoction: 414 Fire fried chicken. And how could we say no to a challenge? 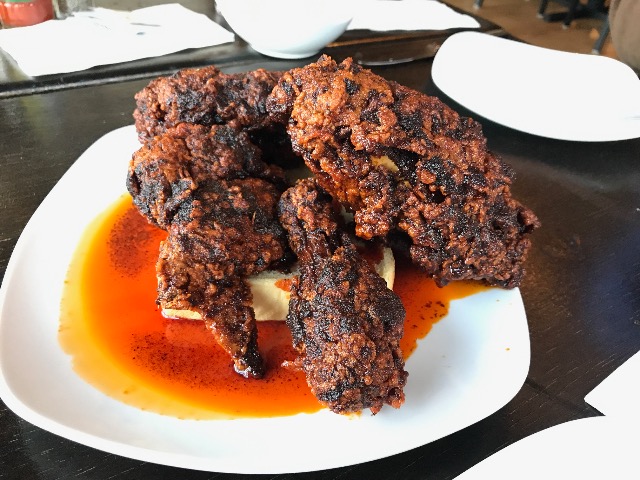 This was supposed to be an off week.

After escalating our Burning Through Brew City quest to one spicy stop every week for Dining Month, I was supposed to get seven days of beautiful, serene, sizzle-free meals for my stomach and my taste buds to heal. I was going to have a whole week without my stomach feeling like I'd just digested most of the lava rock monster from the end of "Moana." No hiccuping, burping, crying, sweating and just generally embarrassing myself on Facebook Live this week. Nope! Just a nice week of heat-free culinary vacation for Matt!

And then we stumbled upon this: 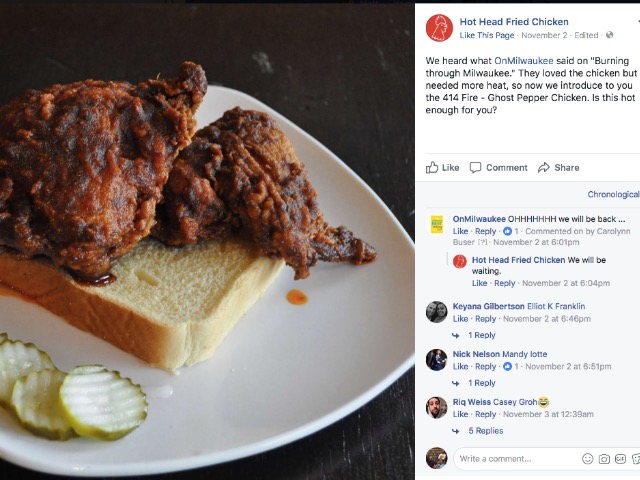 My heat sensors are screaming "Dammit!," but my stomach is screaming, "Hot damn, that looks good!"

And so Nick and I found ourselves back at the cozy chicken-obsessed confines of Hot Head Fried Chicken yet again. I'm sure you remember many of the restaurant details and history from our last adventure into Bay View's valhalla of fried chicken. The space – located at 2371 S. Kinnickinnic Ave., right next door to Crafty Cow – was originally the home of Bumstead Provisions, but over the summer, co-owners Mike Bodow and Devin and David Eichler decided to hone the focus on their most popular dish: fried chicken. And so the restaurant transformed into a Southern food hotspot, serving up specialty mac and cheese dishes, classic Southern sides and, of course, a whole heap of fried chicken – including a Nashville hot flavor that we sampled for a previous visit.

Frankly, the burn was low compared to some of our past contestants – and not even close to how fast we blazed through eating our two plates of delectably juicy chicken. But Hot Head, unfazed, went back to the kitchen and cooked up a new spice sensation: the 414 Fire fried chicken, complete with ghost pepper in the seasoning and a glowing neon orange oil lingering on the bottom of the dish that screamed, "Caution: Do not handle without wearing appropriate goggles and gloves," like a safety poster on a high school science lab's wall. Then they did the 21st century version of slapping a rival's face with a glove before a gun duel, and sent us the above Facebook post as a challenge.

Would we accept? Oh gosh, having to eat delicious fried chicken again on a weekday afternoon instead of vending machine snacks? Well, I guess if somebody has to jump on this grenade ...

So let's don our protective gloves (but really) and dig into this bird. Would the 414 Fire fried chicken have us calling 9-1-1? Or would we merely be calling Hot Head's bluff? Let's eat!

Nick: That's more like it! The 414 Fire kicks in immediately. It's got a sharp mouth burn from the first bite and builds from there. Soon after, you're sweating. By the end of the meal, you've got a runny nose. All marks of a great spicy meal. It's at a perfect level for me. Hot enough to enjoy the effects; no so much I have to put it down.

Matt: Now this is what I am talking about. Frankly, this to me is closer in terms of heat to authentic Nashville hot chicken than Hot Head's Nashville hot flavor, bringing on the bombastic burn just like that Southern specialty ... but if it was also cooked on the surface of the sun for a little extra spicy bite. This stuff is HOT, coming in almost immediately with a sizzling, sharp full-mouth burn thanks to the newly added of ghost pepper. I hiccuped. I sweat. I blew my suddenly uncontrollable nose. And I was very glad I was wearing gloves to protect my hands from the sauce's assumably acidic powers.

If you're a fan of Nashville hot chicken, but wish it was just a little bit more of a mouth-charring challenge, this is the level for you at Hot Head.

Nick: This isn't a fling, it's a commitment. The mouth burn was mostly gone by the time we left, but the belly burn (as with most ghost pepper sauces) is where the sauce really kicks in. It took a bit to warm up and once it settled into my stomach, I felt warm until I went to bed nearly eight hours later.

Matt: The actual mouth burn sticks around solidly, though it does temper comfortably after several bites. The reason why, say, the papaya salad scores so high is because it hits such a high temperature while you're eating it and then stays there for seemingly hours after you've finished. Still, the sizzle from this chicken isn't just for your buds though, as hours later, I went to bed with a five-alarm fire still roaring in my belly. A strong fiery burn on the buds, plus a second stomach sizzle hours later? That's some solid spicy food.

Nick: Just as great as last time. The chicken is still perfect, and the sauce has a deep, smoky chili flavor marked with that ghost pepper heat. The sauce was a little less herby than the Nashville Hot, but still had enough going on besides the heat to make it interesting.

Matt: Hot Head not only raised its game on its spice level for this second visit, but it kept the bar for chicken itself still cranked to 11. The chicken is still juicy and tender as all hell thanks to its buttermilk brine, making you come back for more even when your internal heat monitors are crying for relief. The spicy 414 Fire sauce isn't just a scalding, either. Thanks to the chili and cayenne flavors underneath all that peppery heat, it's beyond a simple stunt burn.

Nick: It kept burning – and I couldn't stop eating. I hope the 414 Fire stays on the menu for the long term at Hot Head, because I'll definitely be back for more. Great fried chicken paired with a truly spicy and satisfying hot sauce? This will be a top-flight craving for me from now on.

Matt: After a literally lukewarm first taste test at this new Bay View restaurant, the 414 Fire truly earns the "hot" in Hot Head Fried Chicken. The chicken itself is still dynamite, and now with this new lethal level of spice and flavor, it feels like literal dynamite might have gone off in your mouth too. And yet I couldn't stop picking and gnawing away.

So congratulations, Hot Head, for the second time was the char-inducing charm, delivering me a satisfyingly singed mouth and an even more sated stomach after this return visit. But maybe let's stop here with the challenges for now, because I'm afraid the next level is just fried chicken literally set on fire, then seasoned with napalm.