It's time to bib up and chow down as Burning Through Brew City heads to Brady Street to see how the crazy cajun crab legs at The King Crab Shack rank. Could this underwater treat still bring the fire?


It's officially Friday fish fry season (even if, in Wisconsin, Friday fish fry season is commonly known as "Friday"). Just because most menus are turning their focus underwater is no excuse to lay off the culinary fire – at least that's what my editors told me when I tried to convince them that I gave up roasting my taste buds on spicy food for Lent. And that, plus a friendly Facebook recommendation from a fan, brings us to The King Crab Shack on Brady Street, cracking through some crab legs as well as starting some crackling infernos in our stomachs

The seafood restaurant – technically the brand's second location, the other found on South 27th Street – is still almost as fresh as the catch of the day, moving fresh seafood and Vietnamese cooking into the former Pepi's Place location just last fall. It's definitely a bold change of pace from the usual pub eats and iconic drunk food establishments lined down the block – and that's even before you order any crustaceans to munch on.

Walking into the space is a bit of a shock to the system, especially going from a busy, slushy Milwaukee February day to a colorful dock atmosphere complete with netting and neon yellow ropes wrapped around the inside of the restaurant. It's a welcome watery beach respite – despite being several blocks away from the lake. 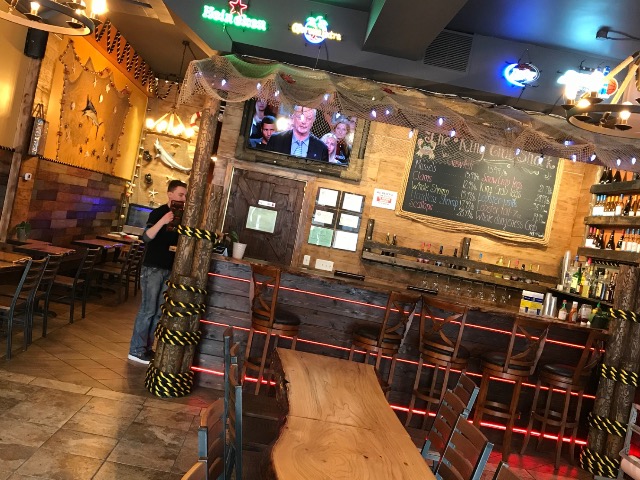 The ordering process can be a bit of a shock to the system as well, as customers first pick their seafood selection, from crawfish to crab legs and more. Then you move to your flavor of choice – either garlic butter, lemon pepper or crazy cajun – as well as your spice level, ranging from non-spicy to "I can't feel my mouth" crazy heat, and your sides. If you want to be very particular, you can choose the number of spice scoops your brothy boil receives as well – from one to three.

This being Burning Through Brew City, Nick and I of course ordered both the crazy cajun flavor plus the crazy spice setting with all three scoops – because we are indeed mad people.

Our crab legs quickly arrived in perfectly unpretentious presentation, plopped on our table in a clear plastic bag, the seafood stewing in its just simmering broth. It was around this time I came to a surprising revelation: Huh, I suppose this is my first time eating crab legs. So not only was I putting my feet to the culinary fire with the heat level, but also I was going to get a crash course in cracking crab.

And let me tell you: I was a slow learner, cutting and snipping and prying and poking and prodding and in general looking like the world's worst seafood surgeon. But boy, when I finally managed to pull out a significant lump of crab, I suddenly knew just how it must feel to win a gold medal at the Olympics. I may or may not have run victory laps around the restaurant with the American flag flapping behind me.

But that was just part of our crab quest. The other part, obviously, was seeing how the spice measured up. So it's time to bib up and chow down.

Nick: Once we opened up the bag of crab legs (an experience unto itself), it was clear The King Crab Shack meant business. One whiff was enough to set my nose on alert: We were in for a treat. My tongue did not disagree. There's plenty of sauce to go around, but you don't actually eat a lot of it after picking the crab meat out unless you really go after it (which we did, natch). Have no fear, even a little of that crazy cajun flavor is enough to set you off with its immediate, sharp heat. We didn't get a confirmation on which peppers were used, but my proverbial gut says there's some ghost pepper involved.

Matt: Even before we popped open our bag of combustible crustaceans, I could already feel the tickle of spicy burn radiating through the plastic. So yeah, this stuff comes in hot, causing more than a few coughing fits as the early sweetness of the spice mix boiled and bubbled into a sharp, long-lasting, peppery blaze. The King Crab Shack may have a laid-back beach bungalow vibe inside, but this flavorful fire was far from a vacation.

Nick: My actual gut also says ghost. Nothing burns all the way down quite like them. The mouth burn is lingering if mild in the long run; I could still feel a tingle when I got home a half and hour later. By then, of course, the stomach burn had settled in and wasn't going anywhere for awhile. If that's not your thing, maybe don't take some extra spoonfuls of sauce just because.

Matt: I'll just say my stomach was hosting quite the crab boil of its own long after our lunch ended.

Nick: The heat overlays, but doesn't overpower, what I'd call a pretty representative cajun flavor. Garlic, onion, pepper and some green spices like oregano and thyme layered over a mild tomato base. The crab was steamed well, though its more delicate flavor was drowned out a bit by the stronger crazy cajun sauce.

Matt: As spicy as the sauce was, for me, the real star of these crab legs was the burst of tomato flavor that kicked off every bite, knocking me back with its zesty layered flavor before kicking me once again in the buds with heat. It's that complex, flavorful fire that cruelly suckers you into coming back for another bite. And another. And another and another until there's no more crab left and you're just drinking the crab boil out of its bag with a straw like it's a Capri Sun.

Nick: It certainly was a treat. I haven't eaten crab legs in ages, and these were definitely spicier than I thought they'd be. I'm not sure crab is the best match for such a hot sauce, but that's our fault. Next time, I'll try the crawfish instead. We're here to talk heat, though, and the bottom line is that King Crab Shack brings it. "Crazy" heat is available with any seafood/sauce combination, so there's plenty of room for you to find the right combo.

Matt: Really, this crazy cajun sauce should rank higher. It's quite the slow burning kick of heat that lasts long into the rest of your day. There was just one problem: our delivery device of choice. I'm not sure what made me sweat more: the fiery spices or the finicky process of digging inside the crab legs only to pull out a tiny bite of meat. It's fun and satisfying in a primal caveman way, but I'm not sure those tiny lumps – typically torn to pieces by my dumb amateur man claws – were the best way to experience the full impact of the spice mix.

But it sure says something about The King Crab Shack's crazy cajun flavor mix that it still managed to burn through my buds with just those scant bites.