For our latest Burning Through Brew City challenge, Nick and I were feeling pretty lucky ... Leff's Lucky Town, that is, for the Tosa staple's ass kickin' chicken wings. Would our taste buds find good fortune - or just culinary fire? 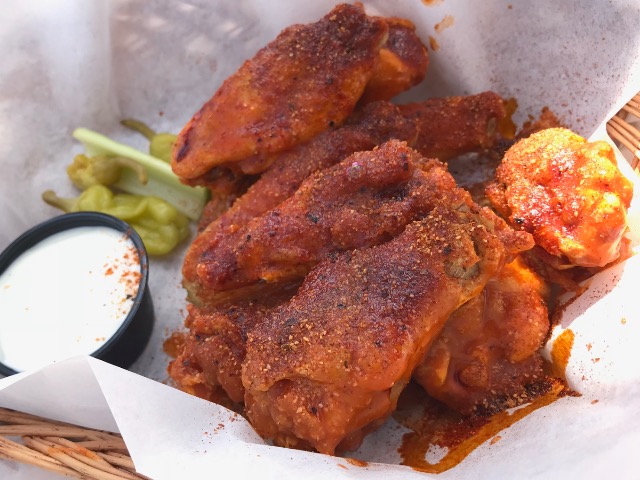 
For our latest Burning Through Brew City challenge, Nick and I were feeling pretty lucky ... Leff's Lucky Town, that is! (Ba-dum-tish, thank you very much, I'll be here all week, tip your waitresses.)

Found at 7208 W. State St., a space that formerly called a silent movie theater and a shoe store/Prohibition speakeasy home (some things don't change), Leff's has served as a beloved suburban staple ever since owner Chris Leffler opened the bar in the mid-'90s.

Nestled in Tosa across the street from Hart Park and just down the road from Tosa Village, the cozy watering hole – the name is a tribute to Bruce Springsteen's 1992 album, "Lucky Town" – has become a serious community hub, even more so after expanding with a lovely patio area in 2009, offering open air and a view of bustling State Street (which, like seemingly everywhere in Milwaukee this summer, means a view of construction barrels).

But even so, the fresh air makes for a perfect summer setting for some fresh food, namely Leff's popular burgers (including an inventive burger of the month) and its  famous big ass pretzel. 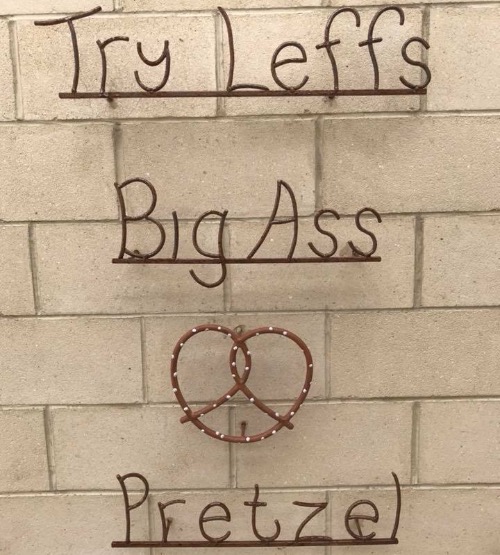 A commenter originally directed us toward Leff's under the guise of a "one-wing challenge," but that turned out to be just a brief, almost mythical situation. According to Leff's lore, they've always had the ass kickin' wings on the menu as a regular option, but customers would order them thinking they could handle the heat, get one wing in and have to forfeit in fiery disgrace – laying waste to people's taste buds as well as wasting a lot of good chicken wings in the process.

So on certain occasions, when people would want the extra spicy wings, the kitchen would cook up one wing with the sauce to make sure the customer could handle a full order. Now with the wings' roaring inferno reputation, however, they haven't had to prep patrons as much with the "one-wing challenge."

No test run would be necessary for Nick and me, either, as we got a full basket of these little red devils, which smelled of napalm and nightmares before they even arrived at the table.

Would Nick and I get our asses kicked? Or would our taste buds get lucky at Leff's? Let's taste and see!

Nick: Any doubts we had about the severity of these wings evaporated when we heard the words "Pure Cap." There's no escaping the 500,000-scoville burn it brings and we knew it. The extract took a second to kick in, allowing us to savor the other ingredients briefly before reminding us how the ass kickin' sauce got its name. The wings have a sharp burn that turns on like a light bulb. It burns your lips, your tongue and even that one tiny spot where you sauced your cheek taking a bite.

As soon as the heat turned on – almost all thanks to the Pure Cap; it had that clean, sharp, immediate, stinging fire burn that could only come from pure pepper capsaicin extract (aka hell juice) – I had a full mouth meltdown. I began to sweat from everywhere. My face flushed pure red. I suffered from a barrage of heat-induced hiccups – the first time those have made an appearance in quite some time and always the sign of a spectacularly spicy dish.

And my mouth? Scorched earth, a tart and tingly undiluted sizzling pain that spread throughout my entire gob. I had to laugh to distract myself from whimpering.

So yes, I'd say the wings were hot.

Nick: I'm currently 90 minutes from first bite. My mouth is warm and tingly, but not burning. My stomach, however, is roiling; the belly burn is real. I have a feeling I'll be saying this for at least a couple of hours. [Future-me note from another hour forward: Past-me was correct. Maybe this is my life now. Short of suffering, but a warm reminder of how I spent my afternoon.]

Matt: I was warned by multiple people, from Leff's staff members to past ass kickin' chicken wing survivors, that the belly burn was going to be even worse than the initial mouth inferno. But perhaps some divine intervention delivered mercy upon me, because I was able to resume my day quite comfortably after.

These ass kickin' wings thankfully turned out to not be a pain in my ass – though I did eat pretty much an entire Leff's signature big ass pretzel shortly after our scalding feast to try to extinguish the flames. God works in mysterious, delicious, salty, dough-twisting ways.

In short, in order to survive these wings, I highly recommend getting Leff's massive pretzel too. You'll gain 45 pounds but you won't feel like your stomach is doing its best Pompeii cosplay.

Nick: There's nothing individually out of the ordinary on the ingredient list. Buffalo sauce. OK. Tabasco. Check. Cayenne pepper and cajun sprinkle? Sure. Pure Cap. Well, you did say ass kickin' so alright. Combining them makes for a more varied flavor than I would've guessed.

Matt and I have talked about whether or not capsaicin extract is cheating, and though I'm still on the fence, I like this application. It combines good pepper sauce flavor with a 500k wallop. The cajun sprinkle I assumed was kind of an afterthought actually adds a little dry rub taste and texture to a wet wing. I really enjoyed it.

Matt: When you bite into one of these wings, you have three seconds to taste the flavor before all you taste is hell. Luckily, those three seconds are awfully delicious.  The Buffalo sauce, Tabasco and cayenne all come in with their signature, smoky, peppery flavors – and then that smoke turns into fire thanks to the Pure Cap. It says a lot that, after my mouth recovered and adjusted from the first inflammatory wing, I went back in for more and found its Buffalo sauce on crack flavor and experience so addicting.

Nick: 100% worth having, 100% worth going back for. The mix of standards makes for a well-rounded, familiar flavor that packs the heat of a potent extract. Leff's ass kickin' wings don't unseat current heat champion Jonny Hammers', but they're probably the most interesting wing we've had so far.

Matt: Jonny Hammers' is still the spiciest wing – and food item, period – we've tasted so far in Burning Through Brew City, but Leff's is the better wing. With Jonny Hammers', I had to give up after two bites, but Leff's wings bring the fierce, hiccup-inducing heat along with the ability to actually, you know, eat them – and fully taste them. It may be No. 2 on our chart, but they're No. 1 in my heart. My poor capsaicin-caked, progressively melting heart.