The Diablo burrito at Margarita Paradise certainly has the name of a taste bud burner, but can the dish live up to its devilish reputation? Burning Through Brew City faces this demon and sees which circle of purgatory it lands on. 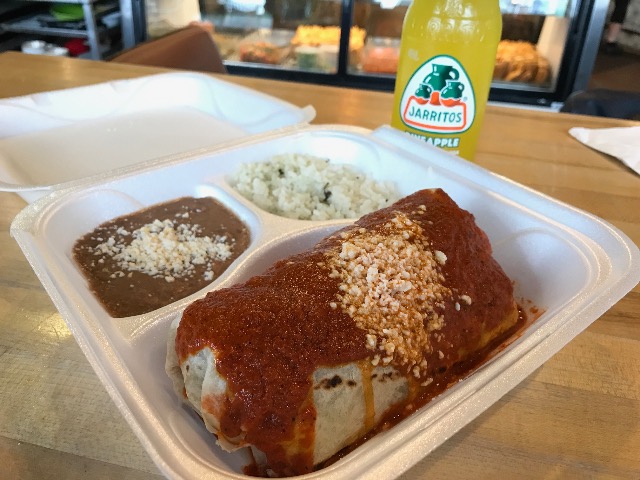 
After several weeks of shocking, unseasonably balmy weather, fall has finally arrived in Milwaukee. So what better time to take a trip to Mexico to warm up with some hot and spicy foods?

Well, a Mexican restaurant in Milwaukee is probably sufficient enough to heat up a bit – or at least to definitely heat up our taste buds. And there are few dishes more apt for that task – or at least more aptly named for it – than The Diablo burrito at Margarita Paradise.

Born originally in West Allis, the spin-off inside the Milwaukee Public Market has become a star in its own right for the Downtown dining hotspot, enticing workers and visitors alike ever since it opened in 2009 with its tasty titular margaritas (perfect for blowing off steam after – or during it if it's been a particularly rough morning), tacos, margaritas, burritos built for any hour of the day, margaritas and other authentic Mexican culinary marvels. That's all coming in at working person's prices too, as we discovered during our $7 Downtown lunch challenge this past summer. Also: Did we mention the margs? Because margs.

Nick and I, however, did not come to Paradise to refresh our palates. We came to potentially burn them. Enter The Diablo burrito – which translates out to "devil," in case you've not only avoided ever attending a Spanish class but also never visited a Mexican restaurant or, hell, even a Taco Bell in your life. It's not the inside of the big honkin' burrito (technical culinary term) that instills fear in diners. It's what's slathered on the outside: a sauce made of smoked habanero peppers that's the color of the devil.

But is its heat just as hellish? It's time for Nick and I face this demon and see which circle of purgatory it lands on.

Nick: The Diablo lives up to its namesake. The habanero sauce kicks in immediately in a way that'll have you asking yourself, "Have I gone too far this time?" It plateaus quickly, so you'll have your answer soon enough. The burn settles into a sharp, lingering mouth burn that I've found typical of habanero sauces. For me, it's enough to get my blood flowing, but not a challenge to eat.

Matt: The greatest trick the devil ever pulled was making me think The Diablo burrito wouldn't be that bad. After all, just looking at it, it's just a red sauce smothered over a burrito. With all the cooling cushion packed inside – cool crisp lettuce, juicy tomato, a mild chihuahua cheese and a chewy tortilla – how brutal of a burn could it be?

Well, forgive me, father, for I have sinned: I underestimated the devil's power. Unlike most of our Burning Through Brew City stops so far, where the spice comes in the form of a slow escalating burn, The Diablo comes in IMMEDIATELY hot. The spices – all courtesy of that smoked habanero sauce – leap out of the bite and immediately start a sharp singe throughout your mouth and eventually conquering your lips. I hiccuped within seconds of my first bite and built up a nice face sweat by the end of it. It was embarrassing.

While it might not hit as high of temperatures as our current top mark, the papaya salad, it gets you with just how fast and furious that initial flamethrower burst roars from the first bite.

Nick: Habs leave as quickly as they come, so if the sauce proves too much for you, you'll be recovering in no time. Probably.

Matt: The Diablo burns very bright – but also very brief. Your mouth will likely recover before you leave the table, and while there's a mild gut burn after, you'll move on with your day comfortably. But you'll always remember that first fiery bite – hopefully fondly, maybe fearfully.

Nick: The Diablo is a wet burrito, so let's consider the burrito and sauce separately. The burrito itself is pretty basic but satisfying. The carnitas was moist and tasty, the tortilla fresh and chewy. If you like burritos, you'll like Margarita Paradise's offering. If you don't like burritos, there's no hope for you anyway.

The Diablo sauce is delicious and tastes long-cooked; the flavors are concentrated and marry well. With smoky tones and rich tomato backing the heat, the sauce would make a great chili base. If it came bottled, I'd put it on everything.

Matt: Admittedly, the burrito is more a stage for the sauce than a standout in its own right. Our carnitas was tender yet still satisfyingly meaty, but other than that, the rest of the ingredients are pretty mild and easily overshadowed by the flavorful, smoky fury of the habanero sauce. It's really all just a delivery device for the sauce smothering the whole thing, and thankfully, that sauce is pretty tremendous. Terrifying ... but tremendous, as well as devilish in its ability to bring me back for more bites despite my body's pain sensors setting off the fire alarm. Talk about giving into temptation.

Nick: The Diablo is a good burrito topped with a great sauce. If you immediately look for the spicy items on every restaurant's menu, order The Diablo. It's got what you're looking for.

Matt: It may be called Margarita Paradise, but if you're ordering The Diablo burrito, your meal will feel more like purgatory – and I mean that in the most complimentary way possible. While it may have a short fuse, the dish features one of the most ferocious burns I've encountered so far on this quest, a full-mouth taste bud damnation that, for a brief minute, will make you believe the devil is real – and he comes in the form of a delicious smoked habanero sauce. Bring your appetite ... and maybe a rosary, just to be safe.