After sampling some iconic Milwaukee venues for much of this quest, we decided to turn our taste buds toward a new spot: Hot Head Fried Chicken, which opened just last month in Bay View. Would its Nashville hot chicken send us squawking from the heat? 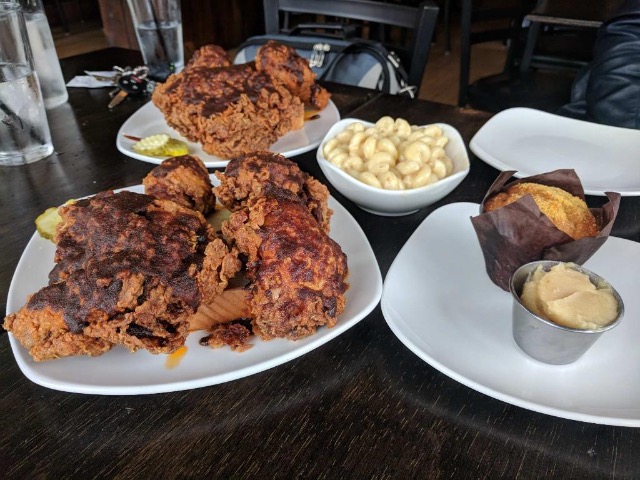 
As anyone who saw the Facebook Live of last week's venture into West Allis knows, the previous stop on our Burning Through Brew City trail went, uh, poorly for me. You laughed. I cried. And later that same day, I cried again when I STILL managed to burn my eyes hours later accidentally rubbing them with my apparently still wing-radioactive hands – even after repeatedly washing them thoroughly several times throughout the day. They're doing the work of the devil over at Jonny Hammers.

So why not tone things down with ... a place that has "hot" right in the name? To eat a dish that's inspired by one of the nation's most infamous and beloved spicy foods – that also has "hot" right in its name? Dammit, I was hoping for ice cream.

After sampling some iconic Milwaukee eats and venues for much of this quest, we decided to turn our taste buds toward a new spot. A VERY new spot: Hot Head Fried Chicken, which opened just last month in Bay View. The space used to be the foodie-friendly restaurant Bumstead Provisions, but this past summer, co-owners Mike Bodow and Devin and David Eichler (who also own the bustling burger joint, Crafty Cow, right next door) decided to mix things up and put the focus on their best selling product: their Nashville hot chicken.

So bird became the word at 2671 S. Kinnickinnic Ave., with fried chicken and all the Southern sides you would hope to get along with it flocking onto the menu. Not to mention flocking onto the walls of the space, too; in addition to old-timey knickknacks and cooking tins, Hot Head now comes with a big glowing sign that says "CHICKEN" in the back of the main eating hall, plus other ornithology-inspired ornaments. 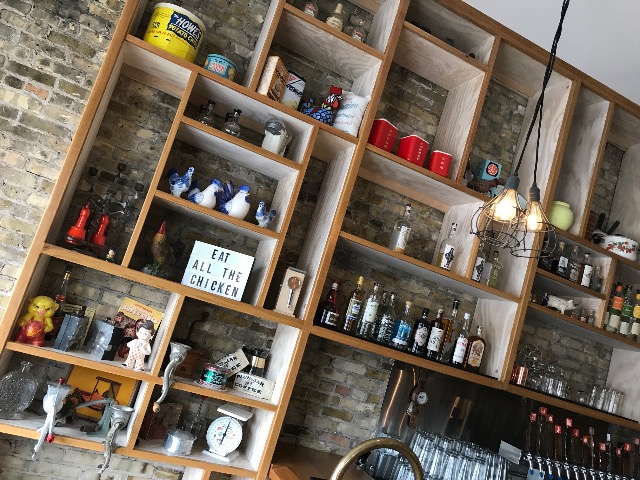 The menu ranges from all over the Southern food spectrum, from the types of chicken – classic, Carolina Gold and Nashville hot – to the special mac and cheese combinations, from Cajun shrimp and andouille to pork cheeks braised with Dr. Pepper and chili. And of course there's grits, greens, fried okra, mashed potatoes and gravy, and more. There's plenty of comfort food to bust your belly with at Hot Head.

But our plan was to bust our taste buds – and the best way to do that at Hot Head would seem to be the Nashville hot chicken (though there is a "scorchin'" dry rub for the wings and skin-on boneless wings called "chick-arrones" that may bring us back for a second stop). So it was time to pig out on some bird. Would we leave squawking from the scorch? Let's dig in!

Nick: The deep red color of Hot Head's cayenne-based sauce and pools of bright oil on the plate look mean, but heat-wise, the chicken is all bark (cluck?). It's a slow starter that will warm up after your first piece, but peak at a pretty mild level.

Matt: As one who took his first bites of authentic Nashville hot chicken just this past summer, I was expecting a lot from this dish. Sampling both the famous Hattie B's and Pepperfire renditions in Music City, the one thing they had in common was some vicious heat right from the first bite, a surprising burst of oily, cayenne-induced seductive spice that clung with you through the whole meal.

Unfortunately for our mission – but VERY fortunate for my still-singed palate – Hot Head fell just short of that special unique heat. It's a late burner, definitely building up with the more you eat, but even then, the cayenne and spices barely reach a sizzling simmer. You'll feel it – a nice pleasant warm heat that's really kind of perfect for a cozy plate of Southern comfort food – but even the biggest chickens when it comes to spicy food can handle this chicken.

Nick: The heat won't stick to your tongue nearly as long as the chicken will stick to your ribs. The heat was an afterthought by the time we left. No long-term suffering here, just a quick how-do-you-do before you're on your way back to normal.

Matt: The burn lingers a decent bit during the meal, but still never to that high of a temperature – more of a gentle boil that a raging fire. Afterward, you'll have a touch of belly burn, but otherwise this hot chicken extinguishes itself pretty easily.

Nick: I love fried chicken, and Hot Head's is without question among the best I've ever had. The buttermilk-soaked chicken is moist, and the Southern-style breading is perfectly (and I mean PERFECTLY) crunchy. There are herb notes – rosemary to my palate, but I'm no Lori Fredrich at flavor identification – at the edges that compliment the peppery sauce just right. I'll definitely be back for more and will spend probably too long in the meantime daydreaming about that delicious chicken.

Matt: With the spice taking a backseat on this hot chicken, the bird gets to be the star – and my god, is it worthy of the spotlight. The breading is crisp and crunchy, providing the perfect contrast to the insanely tender, juicy, meaty chicken waiting inside. I'm actually a little glad this wasn't a complete tongue napalming because that meant I got to pick and gnaw at the bones of our meal without any worry or risk.

Nick: Hot Head's take on Nashville hot strikes me as a classic Milwaukee hot: enough to be labelled hot in case someone's averse but not nearly enough to satisfy someone looking for the hottest thing they can find on the menu. Never having been to Nashville, I can't say how hot-or-not Nashville hot chicken should be, but I will say I expected more.

What I didn't expect was to be blown away by a plate of perfect Southern fried chicken. I can't stress enough how good it is and how happy I was to eat it. It may not push your limits for heat, but Hot Head buries the needle on flavor.

Matt: I'll admit that, coming off both Jonny Hammers' nuclear wings last week and actually scarfing down some authentic Nashville hot chicken this past summer, this was a pretty rough challenge for Hot Head Fried Chicken. And when it comes to its heat, it fell short of both of those ridiculously high marks.

But, when it comes to purely making some satisfying, flavorful fried chicken and delicious Southern sides, this new Bay View joint easily competes with the best. The sign on the wall says "Eat All The Chicken," and that's exactly what we did – and all the mac and cheese. And all the cornbread muffin. And all the foie gras doughnuts we ordered for dessert. I may not have gone home feeling hot as hell, but I certainly went home feeling full as hell.