Is there no need to fear the Sweet Reaper chicken wing sauce at O'Brien's in Wauwatosa? Or would this reaper be not so sweet? Let's take a bite (with a glass of water nearby, please and thank you) and find out. 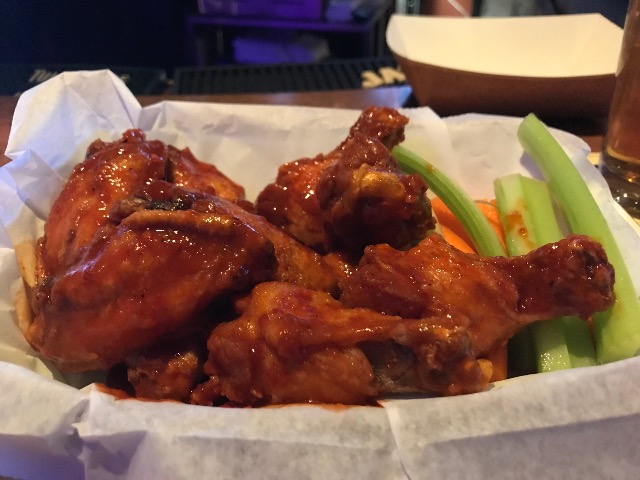 Nick and I first put O'Brien's on our Burning Through Brew City to-do list about a year ago, when the Tosa Irish pub graciously hosted a little OnMilwaukee shindig – and birthed a nefarious idea in my brain.

The bar earned a spot on the list not only because of its saucy wings of various spice levels, but because it had a hydroponic garden where – in addition to your standard veggies for normal human beings – they also grew some ghost peppers. And I thought what better spicy food challenge than knocking back one of the most dreaded of all the spicy peppers, raw, in the name of science, journalism and embarrassing myself online – my favorite pastime. Sure, I pleaded to Nick, it would be painful and unbearably spicy, but we'd be able to drown the flames in a flood of sweet, sweet online clicks. Join me, Nick, as we face the devil and survive to tell the tale.

And Nick said no. Sorry folks; I tried. Send all hate mail and complaints to nick@staff.onmilwaukee.com, please.

But while my pepper idea burned up before takeoff, O'Brien's still beckoned us – for one, simply because we like it there. The cozy Irish pub – fresh off celebrating its 20th anniversary under its currently ownership – has a relaxed, comfortable and classic pub atmosphere that's perfect for hiding out and watching the big game on one of its plentiful TVs or for checking out a band rocking on its neighborhood stage.

Most pressing for this article, however, is O'Brien's lineup of wing sauces – which you can get with either standard bone-in wings or boneless nuggets. The menu provides a whole thermometer's worth, with numerous flavors and levels of heat that I'm eager to sample on another visit. But obviously what caught our eye was the flavor at the top of the thermometer: the Sweet Reaper sauce.

So is there no need to fear the reaper at O'Brien's? Or would this reaper be not so sweet? Let's take a bite (with some water nearby, please) and find out!

Nick: Though deceivingly slow to build, the Sweet Reaper is definitely spicy enough to satisfy the heat seekers among us. The wings have a sharp burn that lingers at the edge of your lips (and cheeks if you're really getting into them). Though the sauce somehow avoids the all-around mouth-on-fire burn we so often see, expect sweaty temples and a general rise in temperature. As seems to be the case with ghost peppers and above, that mouth-on-fire feeling settles in your stomach instead.

Matt: For the wing at the top of the menu's thermometer, with a demonic name like "Sweet Reaper," I was surprised how well I was able to handle the spice while snacking. Make no mistake, these wings are hot, a solid stinging burn that lets you know a business pepper is involved. But the sweetness of the sauce definitely levels out the flavor and gives your mouth something else to concentrate on other than spicy pain.

In short, you can handle these wings. They're more respectable than reaper when it comes to heat.

Nick: Also expect the potbelly stove effect afterward. Is it really still burning? Am I still full? Probably both. Once those endorphins kick in, though, who cares? If you can handle the first burn, you can handle this; just enjoy it. It'll all be over in an hour or two.

Matt: As the famous quote goes, the greatest trick the devil ever pulled was convincing the world he didn't exist in these wings. (Or something like that.) While the sweet takes the spotlight while you're eating, the reaper shows up afterward, causing a nice cauldron boil in your gut long after your meal. Sweet no more, these wings will have your stomach simmering well into bed time. For heat seekers, the stuff dreams are made of – and the stuff nightmares are made of for everyone else.

Nick: Sweet heat usually means sweet disappointment. Not so in this case. O'Brien's Sweet Reaper sauce is sweet and sticky with heat to match. It features a solid pepper flavor, which seems like an odd thing to point out. Normally the pepper part of the hot pepper gets so overrun by heat and other paired flavors that you don't notice it, but here it adds a level of freshness to the sauce as well as a bit of integrity – the sauce tastes like it came from actual peppers, not extract or a mix of other sauces.

Matt: O'Brien's Sweet Reaper sauce may not top our rankings in terms of spiciness, but it might just be tops when it comes to flavor. The tangy sweet heat is delicious and perfectly balanced, the spice and the sugar both helping to mellow and bring each other out. And here's a bonus: I'm not much of a sauced wing guy – I don't like the mess, and the wings can get gummy thanks to the lacquering of sauce – but these bird bites are an exception, with the outside skin of the meaty wings having a solid snap that can hold up to the deluge.

Nick: At around 1.5 million Scovilles, the Carolina Reaper is officially the hottest pepper in the world. (Both the Dragon's Breath and Pepper X claim to top the Carolina Reaper's Scoville total, but neither has yet been certified by Guinness. If and when that happens, another escalation in the hot wing arms race can't be far behind!) Though thankfully not packed to the gills with their namesake peppers, O'Brien's Sweet Reaper wings deserve their spot at the top of the pub's scale by offering a considerable, sharp mouth burn followed by a long, slow simmer in the belly. The quality wings and sweet sauce round it out for an experience that's as tasty as it is challenging.

Matt: Are these wings the spiciest things we've eaten on the Burning Through Brew City quest? Far from it. Are these even the spiciest wings we've had blazing this trail? Nope. But did I like these Sweet Reaper wings? Absolutely. And did I go back to O'Brien's after our first visit to snag another order? You bet. And am I going over once more as soon as I'm done writing this paragraph? That's the plan! So let's wrap this up, please. I've got a date with the reaper – and I don't intend to be late.