We headed to State Fair in the hunt for a supposedly burn-filled burger. But, of course, it wasn't just a regular burger. It was a camel burger - supposedly the "world's hottest camel cheeseburger." And we haven't even gotten to the craziest part. 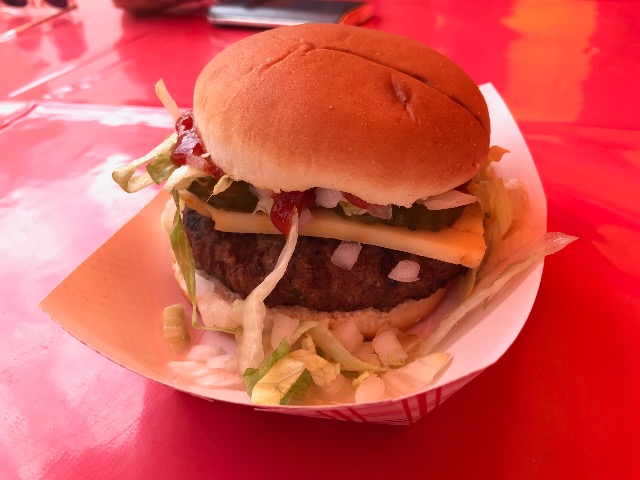 
Turducken on a stick. Chocolate-covered gouda, also on a stick. French onion soup – you guessed it – on a stick. You can discover all sorts of bizarre culinary creations down at the Wisconsin State Fair (typically on a stick). But one stand arguably features the weirdest food finds in the entire fair: All Things Jerky. With three locations spread across the state (Appleton, Eagle River and Minocqua) plus its State Fair spot, the funky Midwestern meat market provides oddball options like alligator, ostrich, antelope, cricket chips, literal ants on a stick and earthworm jerky. And that's all before hitting its Exotic Meat Grill, just to the jerky stand's left.

And somehow we haven't even gotten to the craziest part of the whole experience: After ordering our two formerly hump-backed hamburgers, Nick and I had to sign waivers for the spicy sandwich. So if this sandwich was as hot at the sign claimed, we'd legally have no one to blame but ourselves.

It sounds outstandingly spicy, but Nick and I had been burned by this stand before – and not in the way we hoped.

One year ago, for one of our first Burning Through Brew City escapades, we visited the All Things Jerky stand for a nibble of its Carolina Reaper beef jerky. Now the Reaper may register as the world's hottest pepper, scoring at more than two million Scoville units, but the beef jerky left us very cold, barely registering much of a burn at all. So pardon us if we were a little skeptical, even after signing our wavers – which felt like maybe just some fun fairground salesmanship rather than an actual legal warning.

So would the Desert Heat Burger – a camel patty topped with Carolina Reaper cheddar cheese, spicy ketchup, hot pickles, lettuce and onion – torch our skepticism to the ground? Or would the Exotic Meat Grill cook up another bummer rather than a burner? Let's find out!

Nick: Driving through Blanchardville a few years ago on the way to a camping trip, I laughed at a sign that said "Wisconsin's best bloody mary bar" like it was the World's Best Coffee from "Elf." Turns out they were right – and now Lady Dawn's is a must-stop.

Similarly, I rolled my eyes at "world's hottest camel cheeseburger." It's not going to be hot. But I snuck a lettuce shred while we were setting up shots for the video and immediately felt the sting. At that moment, I knew I was wrong, and this burger was going to be a beast.

The heat comes in three forms: Carolina Reaper cheese, hot pickles and spicy ketchup. The cheese and pickles are mildly hot but still tasty. It's the ketchup, though, that burns the house down. The mouth burn is immediate and stinging. It somehow tastes like peppers and burns like extract. Definitely a top-tier heat for this series, maybe a top-five.

Matt: I'm not sure how much competition there is for the title of "world's hottest camel cheeseburger," but no matter the case, the Desert Heat Burger definitely deserves its spot at the top of the list.

The pickles add a little salty spice, though they're probably too juicy to really bring the heat, while the Carolina Reaper cheese predictably brought some burn to the burger. (But it's also cheese, so the peppery bite came in its own coolant.) So it was up to the ketchup to really bring the napalm to the nosh ... and it most certainly did, with a sharp habanero-on-acid sizzle. From a calm beginning, the ketchup quickly ignited into a full-mouth burn that made me feel like I was spitting fire. But, in actuality, I was just hiccuping and burping and looking like a doofus in public. Great!

Nick: My temples were sweating by the time I finished, and the stomach burn was full-throttle as we walked away. A digestif at the adjacent Milk House countered the heat, but a couple hours down the road, I can still feel a mild belly burn. This one's gonna to be with me for a while.

Matt: In case the immediate burn of the camel burger wasn't enough to convince me that waver we signed was legitimate, then came the belly burn which boiled steadily throughout the rest of the day. A pleasant jaunt around the State Fair grounds helped cool things down a bit, but by the time I went to bed that night, I still felt as if maybe my gurgling stomach was possessed by the ghost of the poor desert-roamer I'd dined upon.

Nick: Everything tastes like chicken; camel burger tastes like beef. Overall it was a very simple burger and, other than the heat, not much to write home about: standard white bread bun, dryish patty, unmelted cheese, iceberg shreds, bread and butter pickles, ketchup. It tasted good on its own, but it's not stretching Lori's Burger Trail score. It's a fair Fair burger.

Matt: Despite its outlandish star ingredient, the camel cheeseburger tasted like ... well, just a regular burger. In fact, if you hadn't told me going in that it was camel, or any kind of oddball meat, I'd have guessed it was just a regular freezer burger patty, satisfyingly meaty but also pretty dry and bland. In a rare case of wanting more heat, I really wish the cheese was melted, adding a delicious gooeyness to the burger instead of just a cold, stiff slab, and the optional onion and lettuce were obviously there for texture, not flavor. Plus (*whispers*) I don't like pickles, so for me, the briny flavor wasn't worth the middling amount of heat they delivered.

So, once again, it was up to the spicy ketchup to save the day – and once again, it delivered. As Nick noted, it provided an extract-level ferocious fire, but while extracts tend to have an empty flavor otherwise, this clearly came from peppers and spices, adding a floral depth to the burn that just pure capsaicin can't provide.

So while the featured ingredient might catch your attention walking past, the heat truly is the star of this dish – and deserves the spotlight.

Nick: I was really not expecting much with this. Turns out it's pretty much the same place as the super disappointing jerky last year – plus it's State Fair and Summerfest didn't yield a single lousy Scoville.

Matt: All Things Jerky and Exotic Meat Grill, all is forgiven for last year's jerky ... and by that, I mean I'LL NEVER FORGIVE YOU FOR THIS YEAR'S HELLISHLY SPICY BURGER. As you'd hope for with a claim like "world's hottest camel cheeseburger," this sandwich brings some real, flavorful and flaming heat. The burger itself might not be worth writing home about, but the spice level certainly is. And it's certainly worth the 50 cents to stop by the nearby Bucks Milk House for some tasty liquid relief. (Pro tip: Ask for the mint and chocolate flavors mixed together for extra tastiness plus extra cooling strength.)