It's time to reignite Burning Through Brew City - and we're back with a bang as we head off to a restaurant that's been one of the most recommended places ever since we started this wildly ill-advised quest: EE-Sane. 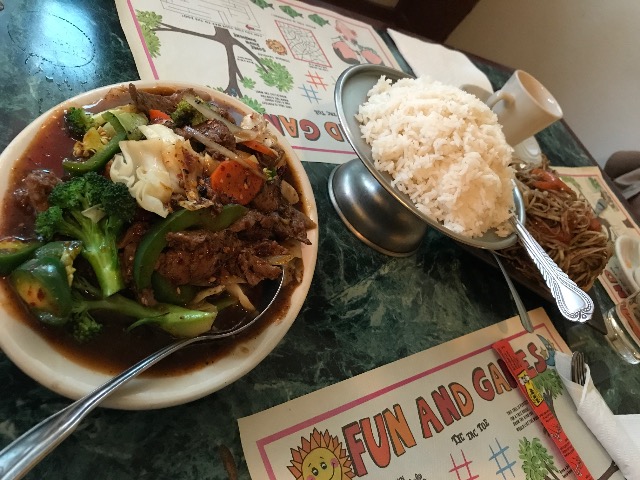 
It's time to reignite Burning Through Brew City! We unfortunately had a bit of a delay since our last adventure – partly due to the holiday season but mostly due to concerns that, if I ate another bite of extremely spicy food, I would likely spontaneously combust. And while the idea of my body doing its best impression of a literal roaring fireplace sounds rather entertaining, I'd rather it didn't.

Now, this is the mandated part of any EE-Sane article where the author describes the beloved Farwell Thai restaurant mainstay as "unassuming" and then generously describes the ambiance inside as, eh, a little lacking, mostly consisting of a few pieces of art on the otherwise sparse plain walls and the transporting power of today's Top 40 hits playing over your meal. But any good foodie knows that that these are all features not bugs. To not only stay open but thrive and become a Milwaukee icon without fancy pomp or flash must mean its the food getting all the accolades and repeat customers. And there's a lot of food to choose from, from traditional Thai cuisine to dishes hewed more toward Americanized tastes, from meats upon seafood upon plentiful vegetarian options.

And luckily, Nick and I were very hungry.

Gazing through the massive menu, we first decided on an order of our old nemesis: the papaya salad. Very early in our Burning Through Brew City days, we put the papaya salad – a classic Thai dish made of shredded raw green papaya smashed together with fish sauce, fish paste, crab sauce, lime juice, tomatoes and a whole mess of chillies – from Asian International Market to the test and learned that not only could the sweet happy papaya be spicy but HOT DAMN could the sweet happy papaya be spicy. Really, really, ridiculously spicy – and also really, really, ridiculously good. So we were more than happy to face our demons yet again. 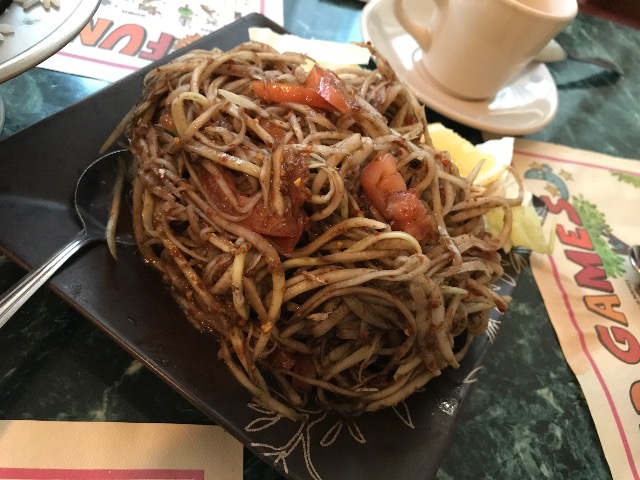 For our second dish, we landed on the hot and spicy beef – because when you're on a search for the hottest and spiciest foods in the city, you might as well go with the dish with "hot and spicy" right there in the name.

But any EE-Sane regular, or any Thai food regular period, knows that it's not really the dish itself that decides your fate. It's the spice level. Much like fellow Milwaukee Thai icon The King & I, after you pick a dish, you then determine your heat level – on a scale from one to 10. And, of course, being very dedicated (re: very stupid) food explorers, we went with tens for both dishes.

So would it be a happy return to the Burning Through Brew City quest? Or would I have to quit again just as soon as we'd returned? Let's taste and see!

Nick: Forget your ghosts, reapers, and scorpions. This heat is fueled by piles of Thai chilies. It starts up quickly with a sharp mouth burn and doesn't come off of that plateau until you're finished.

I've found that a 10 at EE-Sane comes with some variability. A nine is usually my sweet spot; it's almost always hotter to me than maxing it out. This trip seemed to confirm that. Though it was definitely hot, it wasn't as hot as other trips' eights or nines have been.

Meanwhile, the papaya salad was definitely the hotter of the two dishes. As with Guadalajara, cooking the pepper seems to diminish the sharpness of the burn considerably.

Matt: Your theory, Nick, that ordering a 10 spice level at a Thai restaurant is actually less spicy than an eight or a nine, as some kind of psychological trick or act of mercy? Well, let's just punt that hypothesis straight into the lake, because I felt exactly no mercy whilst eating EE Sane's papaya salad.

Just like our experience with the Asian International Market's version, the brimstone from the Thai chilies comes on almost immediately, overwhelming your mouth ... and then just saying at that roaring, raging temperature for a solid, steady amount of time. Normally you get either a slow, escalating burn with a killer apex or an immediate incineration that flames out fast. The papaya salad delivers the best of both – though I think if you were to ask my newly re-ashened palate, it might say it gives you the worst.

As for the hot and spicy beef, well, the cooks were much kinder there. While the dish is exceptionally flavorful, it only brought a mild but still satisfying burn (maybe, like in Guadalajara's case, cooking the chilis also cooks off more of the raw heat). But after the papaya salad, I'll take whatever culinary compassion I could get.

Nick: As with the other Thai chili-based meals we've been though, the belly burn settles in for pretty much the rest of your day. Mouth-wise, you think you're in the clear, but your spice journey has just begun.

Matt: Considering my last experience with papaya salad, I was pretty concerned about how long I was going to be fanning my face after our trip. But I actually found the papaya salad – and the second-place spice of the beef dish – to wear off unexpectedly easy, mostly dissipating by the time we left the restaurant with not a terrible belly burn. Guess I dodged a bullet there (my taste buds would probably beg to differ).

Admittedly, that might've been because I drowned the flames in as much water and white rice as I could get my hands on, but I remember needing a full-blast fire hose to get the papaya salad from Asian International Market to cool down to a mere inferno. It still sustains better than most spicy dishes, but put it just a few degrees below the thermometer-popping temps of our past papaya salad powerhouse.

Nick: EE-Sane has no problem with flavor. I've said it before here and I'll keep saying it: Eat. More. Papaya. Salad. It's a perfect food. It's sour, spicy, salty, sweet, crunchy, fresh and satisfying. The hot and spicy beef is also delicious, with a slightly sweet, very spicy sauce coating the beef and just-cooked veggies.

Matt: The worst part about the papaya salad? It's so damn good. You can't stop eating – despite the rest of your senses begging you to have some mercy. It's just so crisp, fresh and mouth-poppingly flavorful, hitting every part of your tongue with a new explosion of flavor (complete with the fiery aftermath). As much as I want to hate Nick for dragging me into this spice search, he will always have a place in my heart for introducing me to this dish.

Again, the hot and spicy beef was also addictively tasty, with tender strips of meat and a delectable sauce that had just a touch of sweetness to go with the savory. But it's just so hard to stand tall against the flavor monolith that is the papaya salad.

Nick: EE-Sane is a Milwaukee Thai staple. Asking around about where we should eat for this series elicits a "10 at EE-Sane" more than any other suggestion. It's tasty, it's (usually) approachable and it comes as fiery as you want it. These two dishes are good, if somewhat opposite, examples. Papaya salad is a traditional Thai dish (some would say the traditional Thai dish) while the hot and spicy beef is more of a nod to Americanized stir-fry. Both are flavorful, fiery and come in good portions at a reasonable price.

Matt: Nick said afterward that he thought he heard the cook laugh after they heard our double-10 order – and considering the papaya salad, I believe it. Twice we've tried this dish on Burning Through Brew City – and twice I've been totally blown away by its flavorful punch and brutal napalm heat. It's a definite winner.

As for the hot and spicy beef, it definitely was hot and spicy – but not deserving of any greater, hyperbolic words when it comes to the burn. But maybe Nick's right. Perhaps a 10 is actually a mind game, while the eight and nine level orders are where the real singing begins. It's a tribute to EE-Sane's insane flavors that I'm eager to come back and test that theory. Just maybe give me another month to heal again.