After last time swallowing a small tub of delicious pure napalm the Asian International Market calls papaya salad, it was a time for a bit of a cool down on the Burning Through Brew City beat - or not, thanks to a sandwich called the Human Torch.


After last time swallowing a small tub of delicious pure napalm the Asian International Market calls papaya salad, I figured it was a time for a bit of a cool down on the Burning Through Brew City beat. My mouth was still simmering from our last piece (and from eating the leftovers ... and from returning to the Asian International Market a few days later to get more), so logically we'd take some time to recover, I thought.

So what did my colleague Nick pick? A sandwich served at Glorioso's called ... the Human Torch. Thanks Nick. Thanks a whole lot.

Then again, Nick actually deserves my appreciation, because any time you can make it over to the Milwaukee culinary and cultural insinuation that is Glorioso's, it's a treat – even if it requires the risk of eating a bunch of lit matches in between two slices of delectable Italian bread. Born on Brady Street in 1946, the marketplace and deli hosts an incredible selection of housemade and imported sausages, dried Italian pastas, aisles of fresh authentic ingredients, and even the culinary equipment and tools to make yourself an incredible Italian dinner worthy of the Apennine Peninsula.

However, if you're lazy (like me) and extremely inept and borderline dangerous in the kitchen (also like me), Glorioso's also offers up plenty of scrumptious sandwich creations, time-honored family-favorite pasta recipes from the old world, fresh oven-baked pizzas and tantalizing sweet treats to wash it all down. 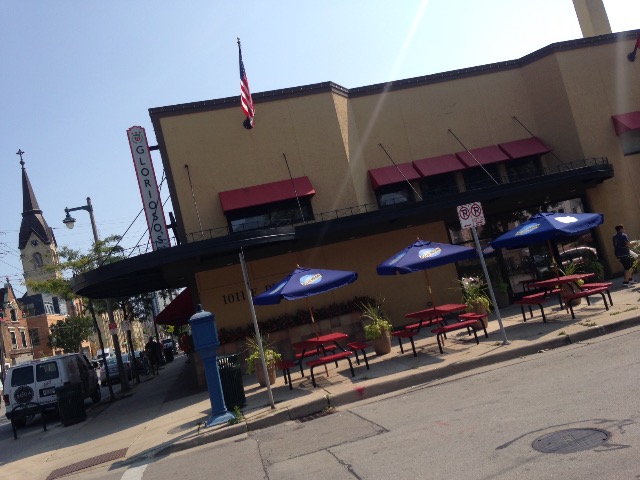 But we did not come to Glorioso's tease my sweet tooth. We came to burn taste buds. So can the Human Torch live up to its fiery name – and the legendary legacy of the market that makes it? Let's pop on up to the deli counter and test it out.

Nick: The Human Torch's heat can be simply explained as reasonable. It's like an amped-up pepperoni and has a similar smoky flavor. It's a pleasant heat – not challenging for me, but enjoyable. The burn is all in the mouth, so the only pain your stomach will feel afterward is being full, especially if you eat the whole thing.

Matt: Admittedly, coming off of the papaya salad from last time, a literal flamethrower to the tongue would probably underwhelm me. So a tough act to follow for The Human Torch.

Even on its own terms, however, this isn't very hot. It's a got a decent burn to the back of your throat, and you won't want to take any deep breaths while eating, because you'll taste the heat in the air. But it's exceptionally survivable – partly because these aren't the most fiery peppers and spices on the market (and certainly not on our quest so far) and partly because the sandwich comes with plenty of its own fire extinguishers, from the crunchy, wet lettuce to the chewy Italian bread.

But it's not like you'll need those anyways. This is a mild flavorful heat, not really a burn.

Nick: It's a good heat, but doesn't last. Outside of being incredibly full (didn't have to finish it, but it tastes so good!), life is back to normal by the time you've cleaned up your table.

Matt: And this is where Nick and I split. For my baby-like palate, the Human Torch is like holding your hand just over a candle flame: You won't hurt yourself with it (editor's note: NO REASON TO TEST THIS, READERS!), but you'll still feel it – and for a good while. It's a low heat, but what it lacks in real power, it attempts to make up in duration – both as a low-key sizzle in the back of your mouth and especially as a simmering volcanic rumble in your belly latter.

Nick: Imagine the most delicious Italian sub you've had ... then make it hot. The bread is chewy and holds up against the formidible (and oily) ingredients. The calabrese and hot capocollo are delicious, the hot muffalata and pepper spread bring the salty heat, and the provolone rounds them all out. I take mine with the optional lettuce and tomato for crunch and a cooling contrast.

Matt: The Human Torch isn't spicy, but it is by no means lacking in spice (if that makes any sense). There is literally flavor oozing out of this sandwich, with the calabrese – a pork salami mixed with red pepper flakes – capocollo, hot pepper spread, smoky provolone and hot muffuletta all mixing together into some seriously meaty, oily, savory bites. Heat seekers may miss the assumed heat of a sandwich named after fire, but your mouth will be too busy absorbing all of the many salty, assertive flavors to be particularly bothered.

Nick: At a place where everything's good, the Human Torch is my favorite; don't sleep on it. If you haven't been to Glorioso's, go get one. If you usually order a muffalata, go get one. It's a massive, delicious, spicy sandwich for only $8 – so just go get one!

Matt: Listen, this is a fabulous sandwich. It's filled to the brim – and then some – with Italian meats, cheese and piles of muffuletta, all exploding with sharp and zesty flavors (and exploding with oil; I murdered a forest's worth of napkins eating this bad boy). Also, you can probably feed a small family with this massive monstrosity – all for less than $8. So you can fill up while leaving your wallet full!

However, this is a spicy food search – and while the Human Torch brings a respectable bit of heat to the table, you're at no risk of getting burned badly here. But my heat sensors thank you, Glorioso's, for taking it easy on them – and my stomach thanks you for the delicious feast of a sandwich.