You can find just about anything at the monthly summer Night Market - and that apparently includes a Burning Through Brew City recommendation. But would the Tough Guy wings at Jackson's live up to their name? 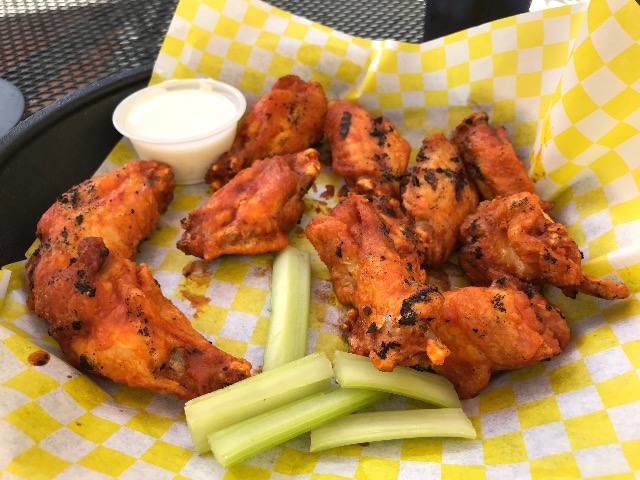 You can find just about anything at the monthly summer Night Market – and that apparently includes a Burning Through Brew City recommendation, in Nick and I's case.

At the year's first Night Market, we were working the OnMilwaukee tent (come visit us; we're very friendly and we have stickers and magnets and temporary tattoos and kind smiles – all for free) when we got a happy family of three to stop by. While I was applying the fun little temp tattoo to the couple's child and dripping water absolutely everywhere (nobody said making art was a clean process!), we got to talking with the couple about the site and some of our running features – including Burning Through Brew City. The father's ears perked up – I believe his name was Mo, so thanks Mo! – and he said he had a recommendation: the Tough Guy wings at Jackson's Blue Ribbon Pub.

That's certainly the name of a Burning Through Brew City dish – and it certainly comes from a place I'm always finding excuses to visit, a task made easier since there's two locations: one in Tosa and one in the Brewhouse Inn and Suites found Downtown. 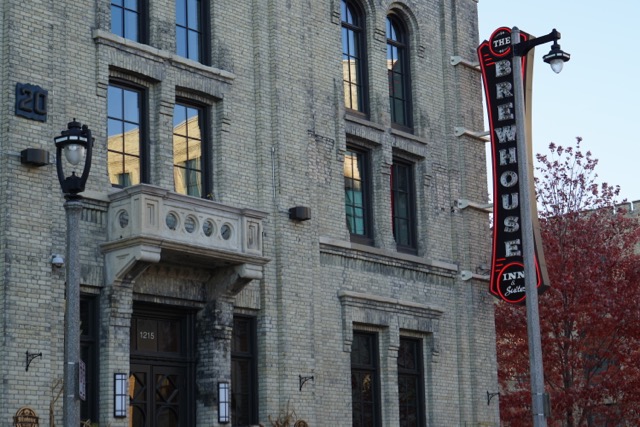 Nick and I went to the latter, where in just five short years, the pub has built itself a nice crowd thanks to its tasty brews, but also its nifty location, surrounded by fascinating Milwaukee history as well as the city's promising future, with John Ridley's No Studios and Milwaukee Film's headquarters moved in just a few blocks away as well as the new Bucks arena (pardon me, ahem, the Fiserv Forum) soon to be open just down the street. Jackson's has always been a good place to grab a beer and bite before shuttling off to Miller Park, the Bradley Center or somewhere by the action. Now, the action's finally moving closer to Jackson's.

As you'd expect for a place named after Pabst, found in the former Pabst Brewing complex, connected to a Pabst-themed hotel, sitting across the street from the Pabst Innovation brewery and featuring a giant glowing Pabst neon sign inside, I found some tasty Pabst Blue Ribbon beers to knock back (in the middle of the afternoon, like the dedicated professional journalist I am). What I didn't expect, however, was the outstanding patio space in the rear of the pub. I've been to Jackson's plenty of times in the past, but somehow never made it there, where there's ridiculous amounts of comfortable seating and bag toss to be found – as well as, in Nick and I's case, a gorgeous summer afternoon sky to sit under. 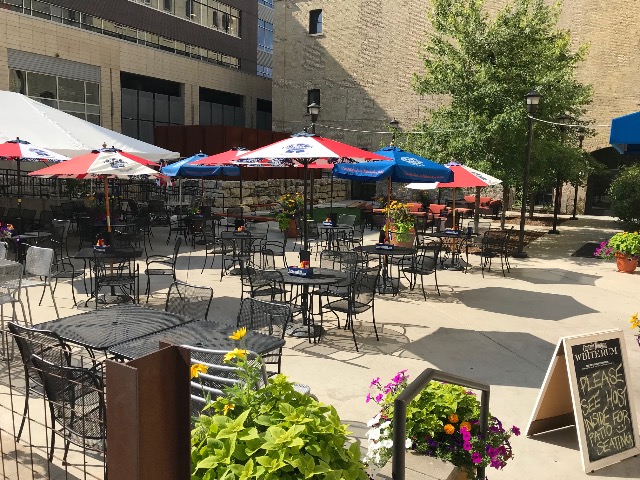 We weren't there to soak up the sun and some suds, however. We were there to soak up some spice, in the form of Jackson's Tough Guy wings – the hottest of the pub's seven sauces. Would they live up to their name? Or would we be too tough for these Tough Guy wings? Let's find out! (And thanks again to Mo for the recommendation!)

Nick: The sauce was described to us as "extra-hot Buffalo," and that sums it up pretty well. I didn't feel any heat through the first wing or two, but a mild burn appeared as we finished them up that felt like something much hotter was fading.

Matt: For the first time in my life, I got to feel like a tough guy – because these Tough Guy wings were not a problem for me whatsoever. The heat was really just your standard hot wing level of burn – well below most of the wings we've tried on this quest, but probably just above Point East Pub's famous hot wings – with a little bonus singe after a few bites thanks to the addition of a bit of habanero.

Even with my generally wimpy palate, I knocked back about four or five of these wings without any problem. Then, riding the high of my newly discovered tough-guy strength, I started yelling, "Do you even lift, bro?!" and tried crushing an empty PBR can against my head. And, well, that was the end of that buzz (but the beginning of a beautiful concussion).

Nick: That fading/not-fading burn held on for a few minutes, but quickly dissipated. I wondered whether that late-game heat would lead to some belly burn in the long run, but it never materialized.

Matt: The little bit of habanero goes a long way ... but not quite long enough for our heat-seeking ways. The slight afterburn went away quite quickly, and by the end of the day, you'll probably forget you ate anything spicy at all (much to my guts' thankful glee).

Nick: Heat or no, Buffalo sauce tastes great. (It's butter and hot sauce: What can go wrong?) It's a common gateway into hotter foods – partially because it's usually pretty mild, but mostly because it tastes so good. Jackson's in particular is a good representation, with an added dry seasoning to give it extra depth. The wings were big, meaty and perfectly cooked. Flavor is definitely the big winner here.

Matt: Ignore the fright-inducing name, as these are basically just Buffalo wings. Really, really, really tasty Buffalo wings, though, with meaty chicken chunks, a punchy and flavorful sauce, and cooked with a tasty char and slight crunch on the outside instead of your usual saucy, sloppy mess.

Nick: We talked to the owner afterward who told us the Tough Guy wings used to be much tougher, but he got a lot of complaints from people that they were too hot. The hottest wings on the menu! Look, Milwaukee: If you order the hottest thing on the menu and you can't handle it, you don't get to complain.

This is, in my opinion, behind the "Milwaukee hot" phenomenon: too many people complaining despite being warned, so it becomes easier or better for a restaurant to just tone it down. After all, a hot-head doesn't go raging to the manager when something isn't hot enough; we just go looking elsewhere. Moral of the story: Don't ruin it for everyone else!

More to the why-we're-here point, though: Jackson's tough guy wings were delicious, but not too hot. Grab an order and enjoy that patio!

Matt: Our order of Tough Guy wings disappeared off our plate quickly – a bad clue to the wings' supposed spicy toughness but a great sign of the wings' tastiness. They may not be worthy of their name, but they're definitely worthy of a place in your stomach sometime soon.