Burning Through Brew City: Jonny Hammers' Too Hot For A Normal Person wings

This week, for the first time, we're going off the map and letting a random reader recommendation guide our way. His pick? Jonny Hammers and its Too Hot For A Normal Person wings. We'll see if they live up to that name.

Too Hot For A Normal Person wings


For the first several stops on our tour of taste bud torture, Nick Barth served as our cruel tour guide, using his own well-studied database of hot dish hotspots to get Burning Through Brew City off the ground. But this week, for the first time, we're going off the map and letting a random reader recommendation guide our way.

Our stop this week comes from a Facebook commenter, who sent us off to the wild world of West Allis – and, more specifically, Jonny Hammers. Named for the owner's softball nickname and the general love for the game around the block, Jonny Hammers has served the city for the past 17 years as a classic Wisconsin corner bar, low on glitz and glamour (save for a beautiful garden getaway of an outdoor porch) but high on friendly neighborhood charm and lively, unique character – whether it's behind the bar, sitting at it or hanging from its walls.

In the case of Jonny Hammers, its decor of choice – apart from the Miller Park murals and sports memorabilia in the pool hall area – is classic music records, from Aerosmith to Van Halen and many, many more. But the favorite is definitely The Grateful Dead, from the small shrine of records and artwork gathering on one particular wall in the main room to its "Tye-Dye Tuesdays" deal, with a Grateful Dead record spinning at 4:20 p.m. (obviously) and a free second drink for anyone rocking a tye-dye shirt. That's far from the only deal they're dishing out at Jonny Hammers too, as wings are only $0.75 each on Mondays, Thursdays and Saturdays. 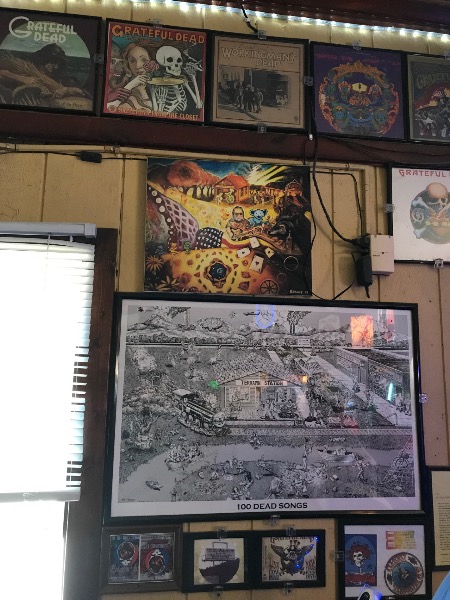 Unfortunately, coming in on a Tuesday afternoon, we missed the wing deal, but we sure as heck we're going to miss the dish we'd come to test: the Too Hot For A Normal Person wings. An ominous name, indeed. But Nick and I are not normal people! We're seasoned spice seekers at this point, with palates born from fire and buds burnt to an unfeeling crisp ... wait, why does the staff look so nervous that we're about to try these? Why are they literally gathered around with concerned glances before we bite into these bad boys?

Let's see if these Too Hot For A Normal Person wings are, indeed, too much for mere mortals.

Nick: The most appropriate thing I could write for this section would just be 47 fire emojis, but I'll try to use real words. We knew we were in for it when we smelled them coming from the kitchen down the hall: These wings are the real deal. The sauce is made with both ghost and scorpion peppers – and Lord have mercy, does it burn. The heat is an instant and intense blast-o-rama at the top of the scale of anything we've tried yet.

The mouth burn matures to a sharp, radiating reminder of what you've just done while your stomach kicks into high gear. I laughed. I cried. I sweat my face off. What a ride. I haven't had anything that spicy in a long time.

Matt: When I was a kid, I once took a bite out of our dieffenbachia houseplant, which – fun fact – is poisonous. My throat began to clam up, and my entire mouth raged with a tingling burn, to that point that I couldn't even close my mouth. Two doctor-prescribed popsicles later, my mouth returned to its pre-swollen state, but I never forgot that once-in-a-lifetime fiery sensation.

Well, twice in a lifetime now.

The Too Hot For A Normal Person wings are easily the hottest things we've sampled in this series so far and probably in my entire life, turning my mouth almost immediately into scorched earth. From the first bite, the sauce – ignited by both ghost and scorpion peppers – explodes throughout your mouth with an instant inferno. I began hiccuping and burping almost immediately from the heat, with sweat and tears not far behind. It doesn't simmer down for a while either, maintaining a sharp, ferocious temperature that had me literally speechless. My mouth was crippled, my brain broken. But I can say it's an unforgettable heat that could only be rivaled by a dieffenbachia salad. Or slurping on a blowtorch. Maybe.

Nick: In for a penny, in for a pound, right? Once the sauce settles in, it isn't going anywhere. It took almost an hour for my mouth to settle down, and my belly is still burning It doesn't matter when you're reading this: My belly's still burning. It's going to be warm forever. This is my life now.

Matt: Ordering these wings is like booking an all-expenses-paid long weekend stay at a four-star hotel in hell. You're calling this hellfire home for a while, in your mouth – where it spreads instantly like wildfire, even to your uvula (aka the dangly thing in the back of your throat) – and in your belly. It's a deep, thorough burn that might quite possibly leave scars.

Nick: It's an overused complaint about spicy food that you can't taste the rest. This is definitely a case to the contrary. The wings are grilled just right, still juicy with just enough char. Even the sauce somehow comes through with a solid chili flavor. Jonny told us he created the sauce with (unnamed) other peppers beside ghost and scorpion to round out the flavor so it wasn't all heat. He's succeeded there: The wings are delicious.

Matt: For the first three seconds, the wing is tender and juicy, and there's a nice smoky sweetness to the sauce. You can tell that this isn't just a stunt dish, spice for just spice's sake; there's layers of peppery flavor in there.

Then everything was napalm and tears.

Nick: You're reading this either because you also love spicy food or because you want to see Matt suffer. Either way, send your thanks to Jonny Hammers for the new heights you'll reach. We have a new standard – and Too Hot For A Normal Person wings are it!

This is exactly what we're after with this series. We were tipped off on this by a reader on Facebook, and it proves what I'd hoped: I don't know what the spiciest dish in Milwaukee is. I'm excited to see where else we land. In the meantime, if you're up for a challenge, pepperheads, get thee to Jonny Hammers!

Matt: I've felt a lot of things over the course of this quest so far: burning, singeing, sizzling, etc. But Jonny Hammers' Too Hot For A Normal Person wings gave me a whole new and unexpected sensation: fear. I could only eat one of these wings out of terror. I couldn't even lick the leftover sauce off my fingers; I was too afraid my brain would melt and start oozing out of my earholes. I honestly though nothing could beat the papaya salad, but this is truly the spiciest dish we've encountered so far, a true memorable challenge for spice lovers from the first bite that'll have you hiccuping, burping, crying, sweating and regretting.

Afterward, the cook came out to check on us and told us the sauce registers 10 times hotter than police pepper spray. And I believe it. I have the broken taste buds to prove it.