Burning Through Brew City: A 10-pepper dish from Kim's Thai

In honor of yesterday's National Heat Awareness Day, Nick and I figured what better time to head back on the Burning Through Brew City trail and bring some awareness to the heat dished out at Kim's Thai. 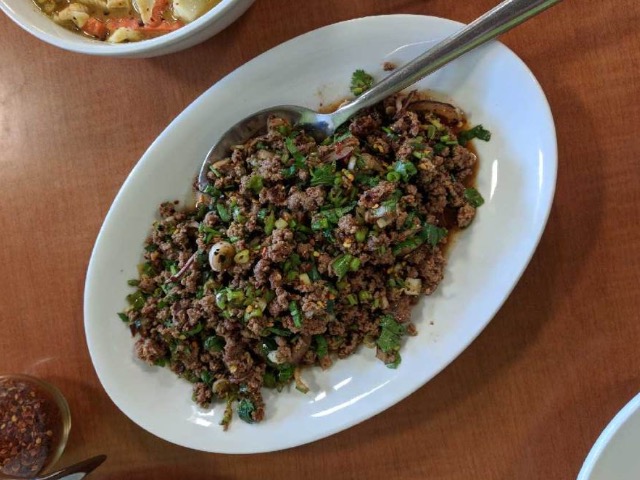 It seems like the summer heat has finally come to stay (*knocks on all the wood in the area code*), which makes it fitting that yesterday was National Heat Awareness Day.

Yes, it's essentially just another one of those random special days invented by some secret hooded holiday-obsessed society (aka the Hallmark corporation), like National Water a Flower Day or National Speak in Sentences Day – which, fun fact, are both apparently real. But it serves a good cause, bringing attention to heat exhaustion and dehydration along with ways to make sure you stay safe under the sun. It's definitely a more worthy cause than National Hole In My Bucket Day (May 30, by the way).

So, in honor of National Heat Awareness Day, Nick and I figured what better time to head back on the Burning Through Brew City trail and bring some awareness to the heat dished out at Kim's Thai – though, judging by its beloved place in Milwaukee culinary lore, it seems you're already pretty aware of this little strip mall gem.

Located at 938 W. Layton Ave., Kim's humble food haven has even more humble origins, building its cult following inside the popular Pacific Produce grocery store in Greenfield. Owner Kim Paneboune's divine carryout dishes became such a hit – including with our own Lori Fredrich, who originally recommended the stop to us – that she was able to move to her own location.

It's still not much from the outside, tightly snug between an employment professionals office and a Lady Jane's barbershop in its airport-adjacent strip mall, but inside you'll find a brightly colored dining space that makes a fine place to pick up your carryout order but an even welcoming place to sit and chow down.

You'll also find a massive menu, featuring everything from noddle dishes to curries, hot plates, fried rice, its famed stuffed chicken wings (as good as it sounds) and other Thai specialties. Like many other local Thai restaurants, you choose the level of heat you want for each dish, from a lowly one to a tenacious ten, so Nick and I landed on ordering a 10-pepper plate of beef larb – which is pronounced without the R and which, for those who don't know, may sound like something gross but is really just seasoned, finely minced meat. Or, as Nick described it, "meat salad."

For some variety, we also ordered a 10-pepper heat level bowl of green curry, which our helpful server recommended as probably their spiciest curry option. What we ordered and what we ended up getting, however, were two very different things as our server had other ideas, teasingly – but still very literally – refusing to let us go to maximum spiciness. Apparently she "could see it in my face" that I couldn't handle the heat. So that's how our 10-level curry became an eight. Damn my baby-like youthful visage! 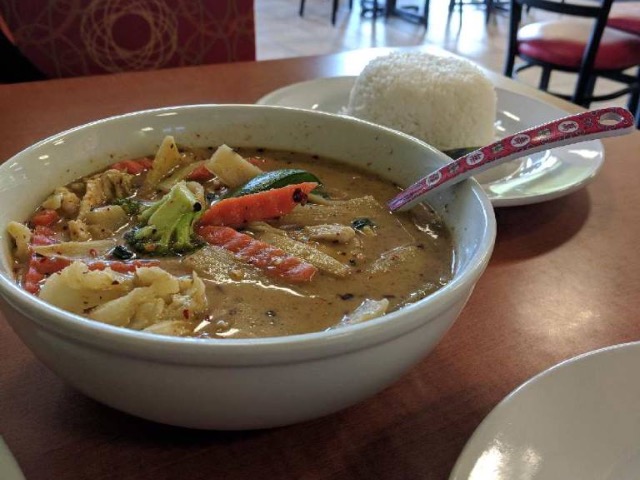 Then, as an extra tease, she casually brought up that one of Kim's Thai's regular customers orders his dishes up to a 30-pepper heat level. 30! The man must be a walking furnace! Considering our quest, Nick and I obviously hopped on that and requested the same ... to which she just laughed and walked away.

Would the 10-pepper beef larb at Kim's Thai prove her right? Or would it be all talk, no torch? Let's taste and find out!

Nick: How hot your meal at Kim's is dependent on one simple thing: how much dry chlii you tell them to put in it. Order a one or two, it's pretty mild. An eight? Real hot. At 10, as we did with the beef larb, you're blazing. They'll even go higher, as with the mythical 30-pepper order while we were there (Note: DO NOT ATTEMPT this. They probably won't cook it for you unless they know you because you're in there all the time pushing the level higher, but really, don't order it.) but we ordered the 10 and burned bright and often. The table came with a jar of dry chili, so, of course, I pushed mine a bit further.

Matt: You know how some dishes have that slow-burning lava-flow heat that lulls you into feeling comfortable at first but then gradually starts melting your mouth and leaving you in a pile of your own perspiration?

Kim's Thai's larb hits with an immediate heat that, if you watch the Facebook live, caused my eyes to bug out of my skull within the first second. The thing is, though, that it's not just your basic burn. I'm not sure whether it was the dry Thai chili or the cilantro from the cooking process, but it starts with almost a cool, tart heat – very different from the habanero that we've been accidentally bingeing on a lot recently. The sizzling sensation wears off a little quickly, but it still hits hard enough to sauce a serious spice sweat – plus I was shoveling this delicious stuff into my mouth constantly so there wasn't much time for my gob to recover. (Sorry mouth!)

Nick: The price I paid for the extra dry chili was largely in the longevity mark. My stomach burned a good long time, no doubt helped along by fact that I left very full. The mouth burn subsided by the time we left, but I still felt it in my belly well into the night.

Matt: While the Thai chili burn lit brightly but briefly in my mouth, gone easily by the time we walked out the door, my stomach was a blissfully boiling cauldron for the rest of the day. The heat definitely makes an impact, but it's the belly heat that'll stick with you until you make your return trip.

Nick: I left so full because I just kept eating. Taken at face value, you probably won't expect a meat salad (which is, in essence, what larb is) to taste fresh, but at Kim's, it really does. The larb was herbaceous, sour and, of course, very spicy. A side of cabbage added crunch and all my senses were satisfied.

Matt: You might be wondering: How good can a pile of simple minced beef on a plate be? Answer: real damn good. This was my first time trying larb, and now I'm upset I spent 27 years of life without it – or at least Kim's version of it, which is deliciously cooked and mixed with several Thai herbs and refreshing cilantro that bring some diverse and exciting flavors to what looks like a basic dish. It's meatily satisfying while also unexpectedly light and zesty, complete with some big lettuce leaves alongside it to make little wraps for a bonus textural crunch, and I feel bad for every plate of larb in my life from this point forward that will have to compete with it.

Nick: Finding new restaurants is the best part of this series. I hadn't heard of Kim's before Lori mentioned it, and I'm really glad she – and everyone else who suggested it – did. The larb and curry were both delicious and plenty hot. It's a little farther out for me than I'd normally go, but I'm definitely looking forward to taking friends there.

Matt: After being nudged toward Kim's by our culinary queen Lori Fredrich and many others along our Burning Through Brew City journey, we finally made it to this signature Milwaukee Thai restaurant – and it thankfully lives up to all the praise (or survivor testimonials, in the case of those who recommended its spicy fare).

Our larb was satisfyingly spicy, coming in hot with a fierce immediate fire layered with that signature combination of Thai flavors: sweet, tangy, salty, rich, all in each addictive bite. I was so impressed I easily cleaned the plate – and our delightful server was so impressed that, afterward, she told me that I'd earned her respect as well as the right to graduate up to a legendary (and possibly life-ending) 30-pepper plate. Honestly a top-five achievement for me.