Would it be "2 Bowls 2 Furious" when it came to the level of spice at Stone Bowl, making its brimstone-hot dishes seem tame by comparison? Or would we easily survive our first fiery foray into fall? 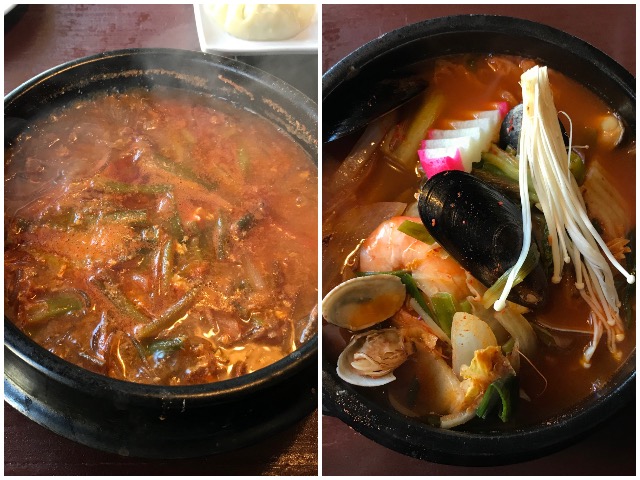 
The temperature may be going down, but things are always hot in the Burning Through Brew City column – literally boiling this week, thanks to our stop at Stone Bowl Grill on the East Side.

Barely five years ago, recommending a Korean restaurant in Milwaukee used to be an easy task; after all, there was only one in town: Seoul at 2178 N. Prospect Ave. (Warning shot, Seoul – we'll be coming for you, too.) The otherwise dormant Milwaukee Korean food scene finally got a kick, however, in 2013 with the opening of Stone Bowl, tucked in between the East Side and Brady Street on Farwell Avenue in the former Mayura Indian restaurant space. And it has since been augmented by restaurants like Char'd in Milwaukee's Third Ward.

The steam you'll find billowing from Stone Bowl, however, isn't from a sense of heated competition. It's from the restaurant's dishes, which quite literally arrive at your table sizzling and gurgling. That's thanks to the famed process of heating up stone bowls to blistering temperatures before pouring the finished product in for a satisfyingly steaming, consistently hot dish of delish. The result is warm and soothing, and if you put your face over the sauna-like soup offerings, it'll open your pores right up.

The stone bowl approach is mainly used for the restaurant's bibimbop rice dishes and soon dobu tofu plates, but the East Side eatery's soups and ramen bowls come out just as seductively simmering; plus the tables feature induction cooktops for Korean barbecue.

We were pointed toward its brothful behemoths during our visit: two in particular for their spicy heat, not just their temperature. Nick went with the jjam-pong, a fiery seafood noodle dish loaded with clams, muscles and shrimp, while I ordered up the yook-gae-jang, a traditional Korean broth bowl bubbling with pork and kimchi. Luckily, for the sake of our rankings (and for the sake of me not having to share all that much of my bowl – back off, Nick!), both dishes came in with about the same level of spicy heat.

Would it be "2 Bowls 2 Furious" when it came to the level of spice, making the brimstone-hot dishes seem tame by comparison? Or would we easily survive our first fiery foray into fall? Let's dive in!

Nick: The jjam-pong's heat comes largely from a chili (or maybe gochujang?) soup base and the addition of cabbage kimchi. I'd put it just above the Milwaukee Hot line; one bite isn't a barn-burner, but over the course of the meal, the combination of spicy-hot and stove-hot is going to make you sweat. Bring Kleenex!

Matt: Did Nick geek out about his "addictive rule of food heat" above? About how some dishes feel spicy not only because of spice heat but stove heat? What a nerd. But I understand why he'd be excited to talk about it – especially after eating at Stone Bowl – because that's how the yook-gae-jang creates its sneaky, satisfying heat. Admittedly, it's not a major burn at all, but the heat of the simmering, sizzling soup combined with the spicy, fermented tang of the kimchi stews up a nice singe in the back of the throat and a respectable sweat on your brow. It's far from busting the thermometer when it comes to spice, but you might just bust your gut slurping down bowl after refreshingly hot bowl.

Nick: The additive rule of food heat applies here, too. Heavy with the weight of a hearty soup and lit by a kimchi-heavy meal, my belly burned pleasantly for hours. Nothing painful or extraordinary. On the contrary, it made for a pleasant afternoon.

Matt: The yook-gae-jang is definitely an escalating burn, with the funky kimchi kick, spicy meat and overall bubbling heat of the dish building up in your mouth and gut as you make your way through the bowl. Even so, though, it only builds to maybe a half-alarm fire – like maybe the smoke detector went off because you left the chimney flue closed on accident. This food is about calming, not cauterizing.

Nick: A variety of seafood (mussels, clams, shrimp) richly flavors the chili/kimchi base, and a healthy portion of udon provides heft to what could otherwise be mistaken as a light bowl of seafood soup. Though it lacks layers of competing or contrasting flavors, I wouldn't say they're missed. The ever-present banchan sides (in our case, cucumber kimchi, potato/bean salad and an assortment of pickled vegetables) provide more than enough variety in that arena.

Matt: A soup this seemingly simple – just pork, kimchi and broth – shouldn't taste this absurdly delicious. But Stone Bowl's yook-gae-jang stirs up a lot with a little, the rich savory broth mixing with tender meat, brought together with the perfect textural and flavorful bite from the crunchy, tart kimchi (for people like Nick who demand competing or contrasting flavors). I damn near licked the bowl clean by the end – which, considering the red-hot bowls involved at the restaurant, it's probably best that I didn't.

Nick: A delightful way to kick off Dining Month. The temperature is dropping, and in Stone Bowl's jjampong, I found my first bowl of fall comfort this year. Warm, filling and satisfyingly spicy, it may not be the hottest thing I've eaten lately, but it might be the best.

Matt: You know that feeling after a great meal when you're so overwhelmed by how delicious the food was that you're almost woozy? That's just me? OK, well, that's how I felt after my meal at Stone Bowl. I was completely food drunk – utterly sated and satisfied and cozy and full with delicious simmering soup broth leaving just a friendly little burn to give my fond memories something to cling to. The word "soothing" doesn't come up much in this spicy food column, but what my dish lacked in crazy furious fire, it made up for with an insanely soul-warming sensation normally reserved for a family holiday meal or a bowl of mom's homemade chicken noodle soup. (Mom, are you working at Stone Bowl these days?)

In closing, fill an IV bag with this stuff and put it directly into my veins, please. (Note: Do not do this: Not only are blood veins not made to handle boiling broth, but more pressingly, it would be a waste of scrumptious soup.)