Burning Through Brew City Bonus: The search for spicy food at Summerfest

The summer part of Summerfest showed up this year, producing some scalding, sweaty, sizzling days down by the lakefront. So we at Burning Through Brew City figured what better way to handle the heat than by finding some spicy Summerfest eats? 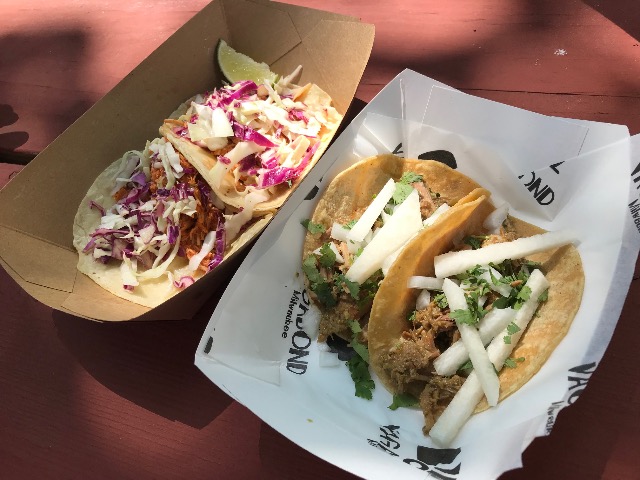 The summer part of Summerfest certainly showed up this year, producing some scalding, sweaty, sizzling days down by the lakefront. So we at Burning Through Brew City figured what better way to handle the heat than by finding some spicy Summerfest eats? (Well, water and shade probably would be better. Or a hop in the splash pad. Or even Lake Michigan. Actually eating fiery food seems like the worst way; we really did not think this out well.)

Or maybe you can? While we barely found anything spicy, what little we did find came with a little bonus heat: a trendy Milwaukee taco showdown pitting the famed BelAir Cantina and its spicy chicken taco against hip Water Street taco hot spot Vagabond and its spicy pork taco.

Whose Tex Mex cuisine would reign supreme? And would it bring a heat that could singlehandedly redeem the rest of Summerfest's spice-free food offerings? Let's take a bite out of the Big Gig and find out!

(This would normally be where a video of our taste test would be, but unfortunately, our camera was so appalled by the lack of spicy food offerings that it glitched out in protest. Because that's definitely how technology works. Anyways, our apologies – but as you're about to read, you didn't miss much in terms of fireworks.) 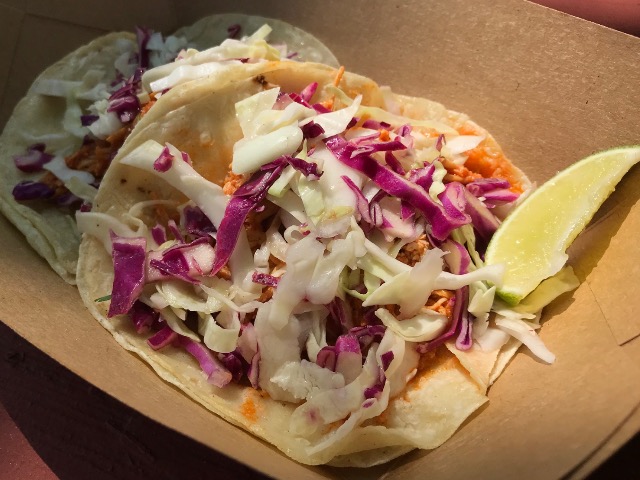 Nick: Bel Air Cantina's spicy pollo tacos had the right look to them: corn tortillas piled high with shredded chicken in a bright red sauce and topped with a colorful slaw. Though they tasted good and had a nice slaw crunch, they were disappointing in the spice department, landing somewhere in the sub-mild range. Maybe it's my desensitized palette. Maybe Bel Air didn't want to take chances. But in any case, spicy they ain't.

Matt: As far aesthetics go, BelAir's spicy pollo taco is certainly best in show here. The packed tacos look like a meal, not just a Summerfest snack, filled with saucy fiery red pulled chicken and a colorful citrus slaw. Unfortunately, this best-in-show looker is a no-show when it comes to heat, with the arbol chiles barely bringing any spice. It's a tasty taco, but you could find more fire at the Hawaiian shaved ice stand. 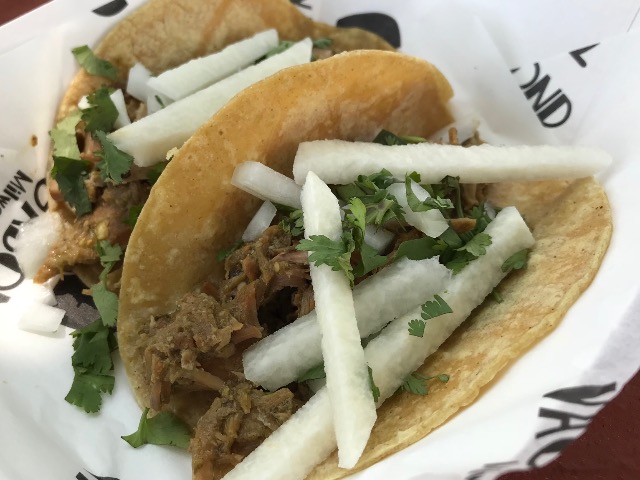 Nick: Vagabond's spicy pork in verde sauce was one step above BelAir – exactly one, tiny step. The flavor was more full (I'm a big fan of green sauces so adjust for bias as you will) and the pork itself had a little more to it than Bel Air's chicken. Also on a corn tortilla. Also featuring a crunchy veg for contrast (this time, big pieces of jicama). Also missing any real sense of heat. I'll give it a barely-mild, but it's still well below the Milwaukee Hot line.

Matt: Now this is more like it ... kind of. Like how barely dribbling a shot off the platform at the one-in-hole golf contest by the lakefront is an improvement over whiffing on the ball completely. But it's still a flavorful taco – topped with a tomatillo serrano salsa, onion, cilantro and long slabs of jicama – and, in a nice change of pace from BelAir's offering, there's something resembling heat here! The green salsa actually brings a little burn to the taco – nothing that'll have you racing over to the nearest fresh lemonade stand for relief, but at least something to merit the word "spicy" in the name.

Nick: Vagabond wins, but vendors of Summerfest: The window is wide open! The bar could not be lower! BRING

Matt: If you're looking for a burn at Summerfest courtesy of something other than the sun, Vagabond is the best route – and unfortunately pretty much the only route.

Listen, Big Gig vendors, I get it. Room, inventory and menu space are all fairly tight, so it doesn't make a ton of sense to use this limited window on a dish that a large portion of customers will instantly recoil from. But this is the world's biggest music festival! Bringing people from across the state, across the country and even across the globe to Milwaukee! Shouldn't the flavors go as big and as bold? So a challenge to next year's vendors: Bring the heat! Spice up Summerfest! Worse comes to worst, you'll make fast friends with the nearby beer and water stands.