Chefs' tattoos & the stories behind them: Adam Pawlak of Black Sheep

For Chef Adam Pawlak of Black Sheep and The Love Shack, tattoos have become a record of his experiences. "Over the years, tattoos have really become a way for me to keep telling my story," he says, "Whether it's my story in food or the more personal side of my life." 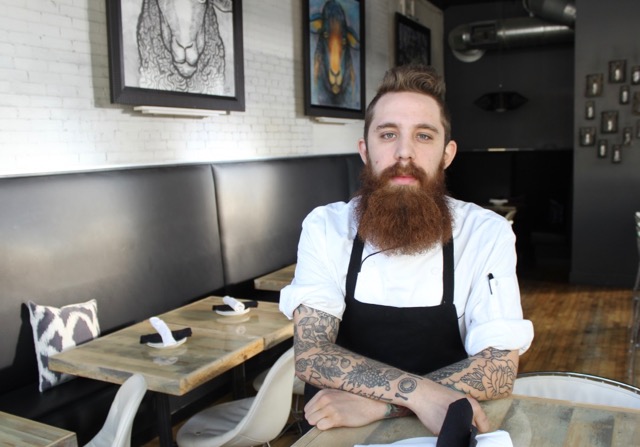 Chef Adam Pawlak, who heads up the kitchen at both Black Sheep and The Love Shack, has been extraordinarily thoughtful about his impressive collection of tattois, which cover both arms (nearly) entirely from wrist to shoulder … well, with one possible exception.

"I got my first tattoo when I was 18," Pawlak says. "I was cooking at the time, but I wasn’t taking it seriously, and I wasn’t really sure I was going to stick to it. My older brother and his friends were really into tattoos at the time. So, I ended up getting a tribal tattoo laced with pot leaves on my upper right arm and shoulder. It’s huge, and it’s probably the biggest one I have; looking back, I probably shouldn’t have gotten it, but no regrets. In the end, my tattoos really tell the story about how dramatically I’ve changed over the years."

The tattoo, he says, is on the upper portion of his right arm, so few people actually see it. But, the ones they do see tell the story of the journey he’s made as a chef.

"By the time I was 22, I had my first sous chef position," he says. "And it was a point where I knew my career was going to go somewhere. I got my first food tattoo – an image of a pig with the classic butcher diagram – as a stamp, as a mark and reminder. It was my commitment to the profession and a reminder to challenge myself and really stay in tune and always be learning about every aspect of the profession." 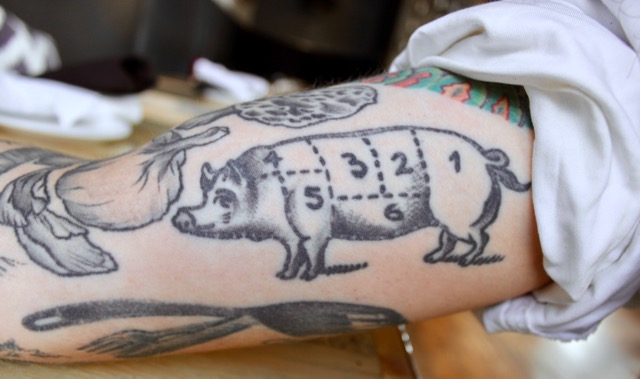 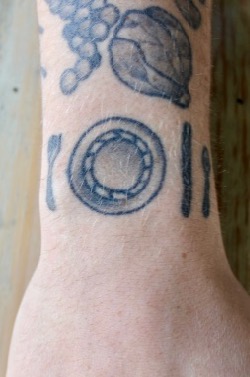 His next tattoos featured a number of foundational produce ingredients, including three different types of mushrooms, garlic, shallot and carrot, which weave in and out of other designs on his forearm.

"It was the start of my career, so they are symbolic of my learning … using classic ingredients and not messing with them too much. If you think about it, there are really no unusual things … no squash blossoms or dragon fruit. Those weren’t part of my repertoire at that time."

"From there, all of my cooking related tattoos have a real meaning," he says. "As my career got bigger, I had a plan to add tattoos for each milestone. The last on my right arm is a place setting that’s right at the wrist, where a watch would be."

Pawlak says he grew thoughtful about his roots, his mentors, and the classic techniques that he’d learned. A script tattoo of the words "Bon Appetit" became a symbol of those experiences.

"It was a tribute of sorts to Julia Child and that era of cooking. You don’t hear many people say it anymore, but back then you’d hear it all the time in restaurants. And it really represents the way that I do things. I’m actually very old school in what I do; and so many of the people I learned from came from that world." 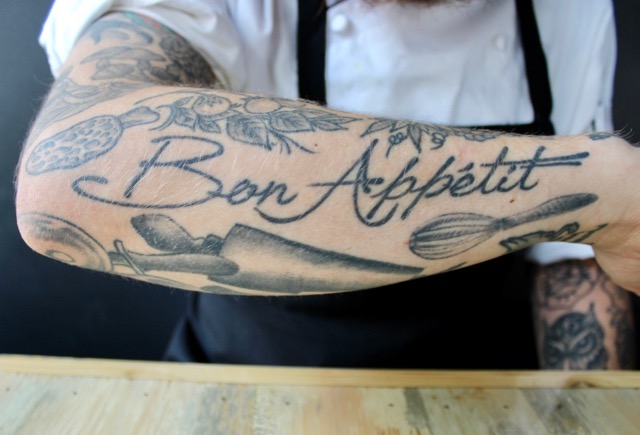 A similar mode of thinking went into the tattoo of a duck just above his wrist on the inner part of his arm. 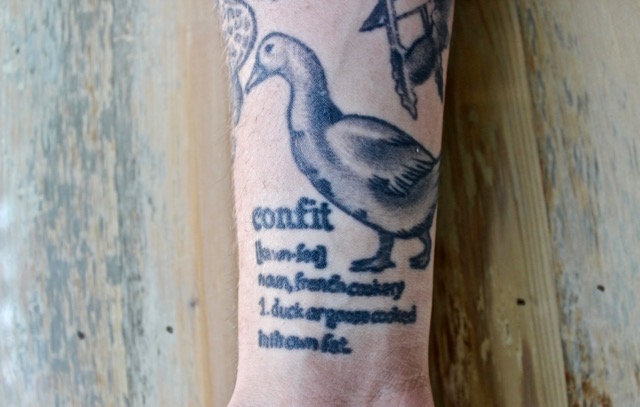 Along the way, Pawlak says he also became interested in adding a tattoo that represented the city and state where he was from.

"So many people do things like a tattoo of the state, with a star where the city is. I didn’t want anything like that. So, I opted for a cow. At first glance, it’s just a plain cow, but if you look closer, the markings on the back are in the shape of Wisconsin. I liked the idea that it was subtle, and you really had to look closely at it to see it." 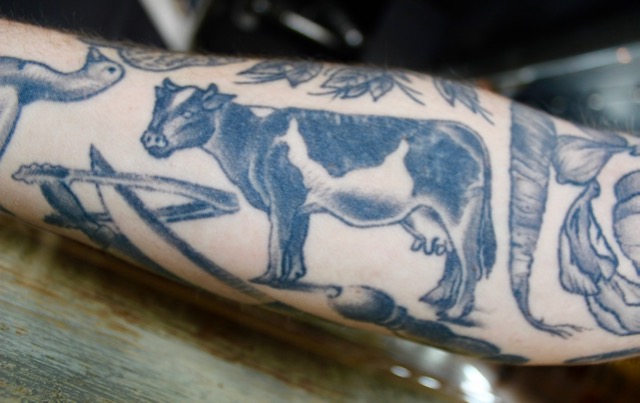 The collection grew, and Pawlak filled out the remainder of his arm with a few more fruits and vegetables: a cluster of vine ripened cherry tomatoes, a bunch of grapes. He also added a collection of common kitchen utensils. "They’re all things that people who work with food have used before," he says, "From a pepper mill to a hand roller, a ladle, a cleaver. Over the years, tattoos have really become a way for me to keep telling my story, whether it’s my story in food or the more personal side of my life."

And, while his right arm is filled with meaningful food-related tattoos, Pawlak’s left arm has thus-far been dedicated to things that are more personal, familial.

"On my left arm is an owl with a sugar skull, which represents all four of my grandparents. They’ve all passed away. The owl represents the wisdom I’ve gained from them, despite the fact that none of them were able to see me in a chef coat or running a restaurant." 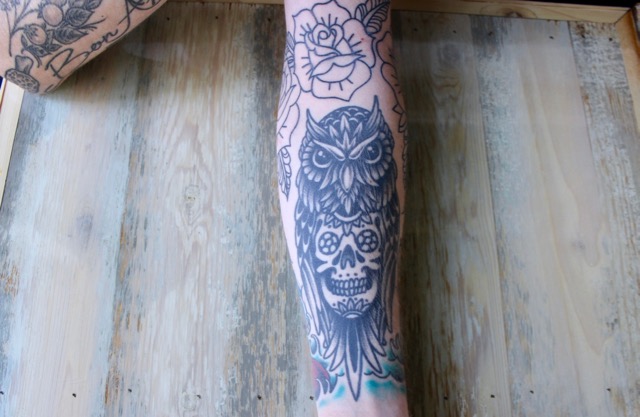 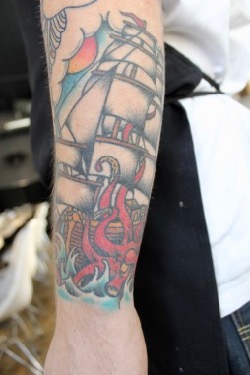 One of his only full-color tattoos was designed by Richie Murray of Horseshoe. It depicts a classic ship with an octopus-like monster circling its base. "My grandfather Sal loved boats and water; and this one serves as a constant reminder of him, right there on my arm."

Pawlak’s most recent tattoo is still in process. It’s three roses, which wrap partially around his upper forearm. "It’s the first tattoo I’ve gotten for my mom," he says. "Her name is Rosalie, and her favorite flower is the rose, so it was an easy choice. Right now, it’s still pretty new and healing, but when I go back they will be finished in classic bright colors like red and gold."

And Pawlak is already planning ahead for his future forays into body art.

"My next will be a pin-up girl in an apron holding a whisk. I’m not the biggest baker, but it’s a reminder that I need to keep learning and improving. And I like the idea of always having a baker with me, sitting on my upper arm. It’s probably years down the road, but I’ve also decided that if I ever open my restaurant, I’m going to get something on my neck. It will be my gift to myself, my reward for making it to that point."