Chef Daniel Jacobs' tattoos are diverse and beautiful, reflecting a variety of aspects and times in his life, from valued personal relationships to his career as a chef, adolescent pastimes and his hometown of Chicago. 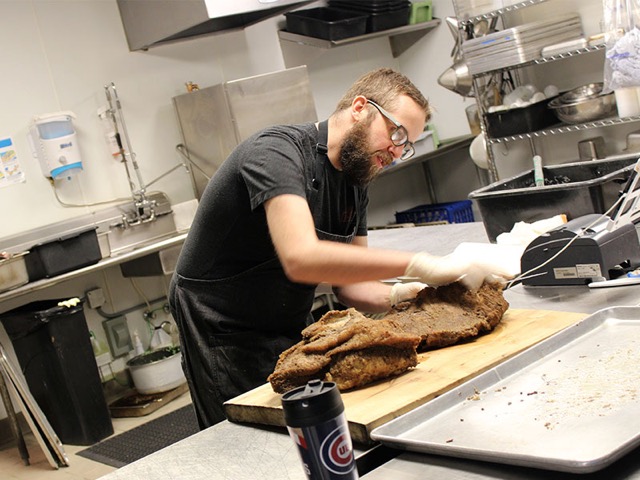 "I got my first tattoo when I was 30," notes Chef Daniel Jacobs of Dandan. "Kate [Riley] and I got tattoos to commemorate our marriage. She got a little chef hat, which we now refer to as the ‘muffin top.’ And I got a tea pot, which my brother refers to as the ‘dick bong.’"

But despite the levity with which his brother treats his tattoo, Jacobs says the story behind it is somewhat sentimental.

"When Kate and I first met, she was living in a studio apartment and she threw a party with a silent auction to sell some of the pottery she’d made," he explains. "We’d been dating for maybe a couple of months, and I wanted to be a good boyfriend, so I stopped by and spent a whole bunch of money on pottery. One of the things I bought – that’s always been my favorite piece she’s ever done – is this tea pot. She did a soup bowl with a really similar look for Chef (Thomas) Hauck at c.1880; the design is just really cool, and it showcases so much of her talent." 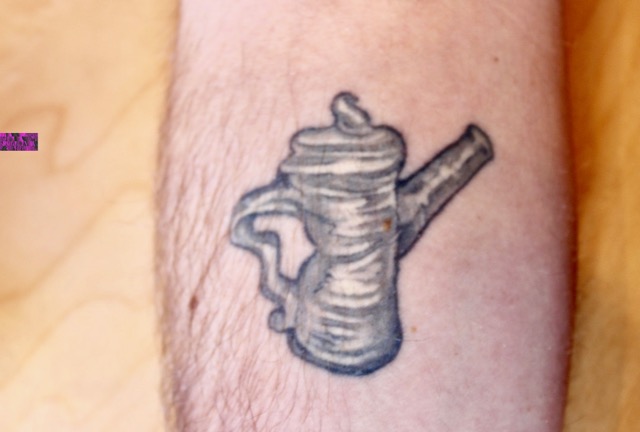 And yet, Jacobs says if he could do it all over again he'd do things differently.

"I think everyone has that tattoo that they regret," he adds. "In this case, it’s not the tattoo. But, if I had to do it all over again, I would’ve probably put it in a different spot. Right now, where it is, it’s just really hard to work around."

Jacobs also sports a simple band on his ring finger, a tattoo that stands in for the wedding band he can’t wear while working in the kitchen. But, he says, he’d never do it again.

"We both got our rings tattooed on our fingers," he says. "But my advice would be: never get a tattoo on your hand. I have a really high threshold for pain; I can deal with a lot. But, I would never do it again. I’ll never get this one touched up or filled in. Never."

Most of Jacobs tattoos tell the story of his relationship with his wife, Kate Riley, and his pride in her work as a ceramics artist. However, at least one pays homage to his career as a chef. It’s a tattoo of a chef's knife located on the front of his calf. 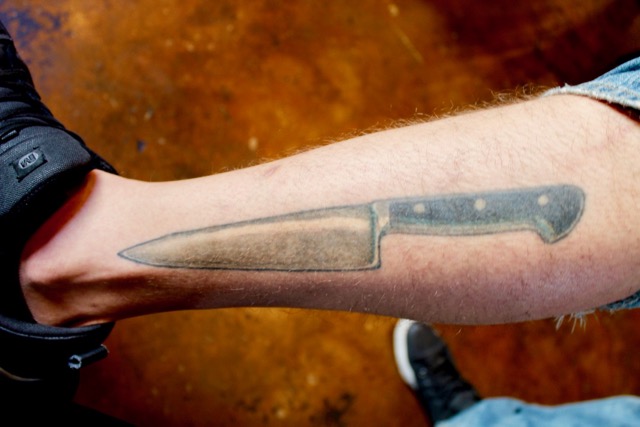 "I thought it was cool at the time to have a chef-y tattoo," he says. "It’s actually based on my first chef knife, which interestingly was stolen at a job I worked a couple of years later." 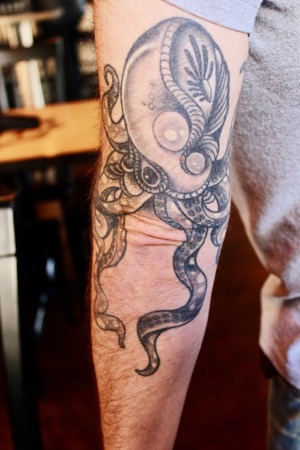 Another, on his upper arm, is both food and Kate-related.

"Sometime around 2013, Kate was doing these really cool plates for Fromagination in Madison,’ he says. "And there was a really great design of an Octopus on one of the plates. I thought it was pretty cool, so I went to Kate Malone at Good Land on Howell (Avenue) and had her reproduce it. She’s a great artist; she has a great sense of humor, and she’s got this really great table manner. And that was awesome. I spent about seven and a half hours with her to do this. And it’s beautiful."

Jacobs, who has always had a close relationship with his brother, says that their relationship has grown even stronger since he was diagnosed with Kennedy’s Disease last year. And he’s got a tattoo to prove it.

"Me and my brother were total nerds when we were 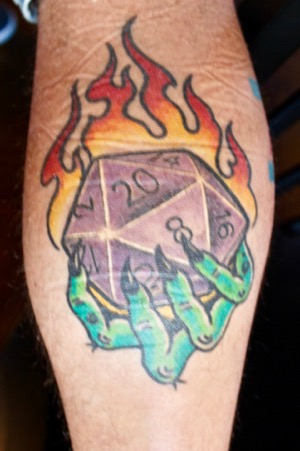 kids. We played Magic, Dungeons and Dragons, the Palladium games … totally geeky. My brother got this goblin hand holding a 20-sided die with a critical strike and flames behind it.

"After we were both diagnosed with Kennedy’s Disease, our relationship got even closer. We were going through something together that no one else was experiencing. And we thought it would be really cute to trade tattoos. I got the goblin hand on the back of my leg, and he’s getting the chef knife in the same place."

Meanwhile, another tattoo commemorates his hometown of Chicago. Fittingly, it was a piece of art he got during one of his frequent trips to the Windy City.

"We were at Hot Chocolate drinking bubbles and contemplating something to do," he says. "Ultimately, we decided to get impromptu tattoos. Kate got a little flamingo, I think, and I got a Chicago flag with utensils instead of stars."

"I’ve always wanted a Chicago tattoo. Milwaukee is my home, and I love it here. Kate and I have been embraced by the city and we have great friends here. I love this place, and I love showing it off. But, I’ll always be from Chicago. And it will always be a part of me." 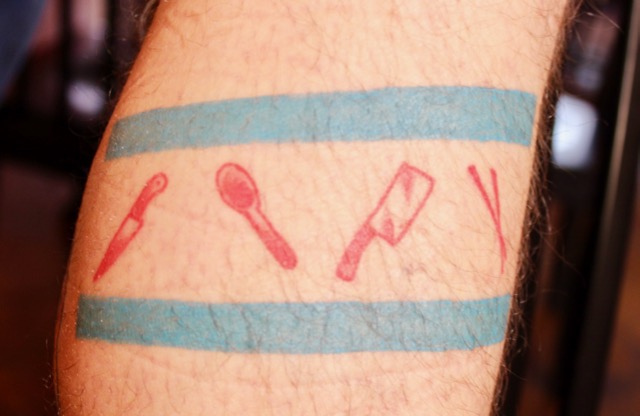 And Jacobs says his tattoo journey is far from over.

"You kind of always want another one after you get one," he says, noting that he’s mulling over a few, including one related to his dog and "probably some Star Wars."