"Tattoos are a way to say who you are," says Sous Chef David Loper of Doc's Commerce Smokehouse. "And no one can negate what you've said. It's on my body. And it's a meaningful thing. Some of mine are really sentimental ... and I think they look really badass." 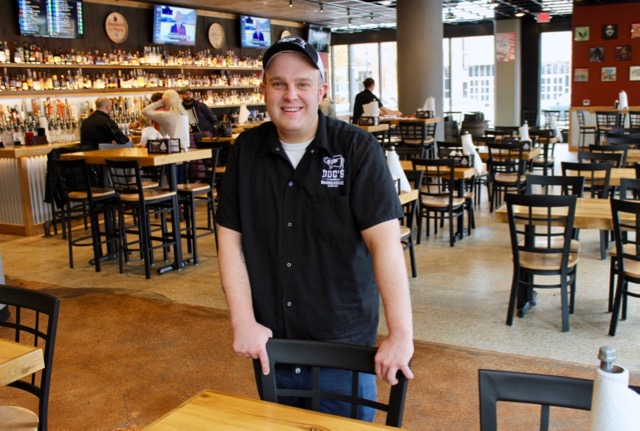 "Tattoos are a way to say who you are," says Sous Chef David Loper of Doc’s Commerce Smokehouse. "And no one can negate what you’ve said. It’s on my body. And it’s a meaningful thing. Some of mine are really sentimental … and I think they look really badass."

Loper says he got his first tattoo just after he turned 18.

"At the time, I was working at a Subway that was across the street from a tattoo shop. The guys from the shop would come over for lunch and we got to be friends. At one point I mentioned I’d been thinking about getting a tattoo, and they said they’d set me up."

Loper says he didn’t think terribly hard about what he’d get for a tattoo; however he knew he wanted something that paid tribute to Milwaukee, the place he grew up. 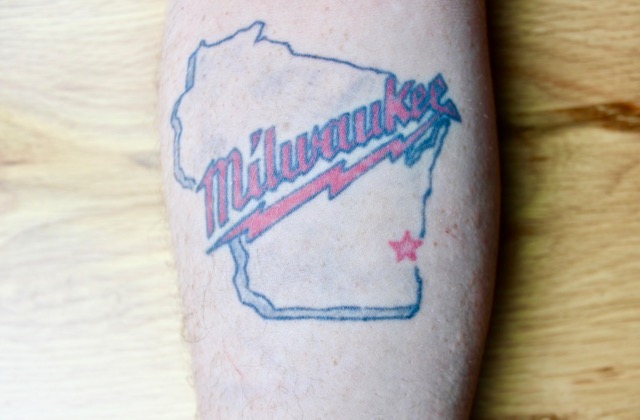 "I didn’t talk to anybody about it. It was like I’d gone to the store to buy a soda. At lunch, they brought over a drawing. I looked at it, and then I went over and did it after work. And then I hid my arm from my parents for three or four days."

Loper says it wasn’t a regret tattoo, per se. However, these days he says he wishes he’d put a bit more thought into it.

"In the end, I don’t regret the tattoo; but I regret doing it so quickly. It may have turned out totally differently if I’d taken more time to think about it."

And that’s exactly what he did when he got his second tattoo about two years ago.

"At the time, I’d moved to Texas for work; I was one of the supervisors at the 024 Grill at the Westin Hotel in Houston. I told an artist friend of mine that I wanted a cow piece, and she drew it up. We went back and forth on the design, and ultimately we decided to incorporate the fruits and vegetables. There’s a beet, a radish, pineapple, watermelon, a carrot and a strawberry."

As the design progressed, the meaning behind the tattoo grew more and more complex.

"The original cow idea came in part because I was involved in the culinary world; I’ve always really loved their faces and thought they were really cool. As a kid, I remember we’d drive out of town, and you always saw cows. They were always synonymous to me of getting out of town for the weekend. But, it was also for my grandmother. She had all these little knickknacks at her house. And she always had these little cow figurines in the window. It was one of the first things you saw when you walked into her house. So, in a way it’s for her too." 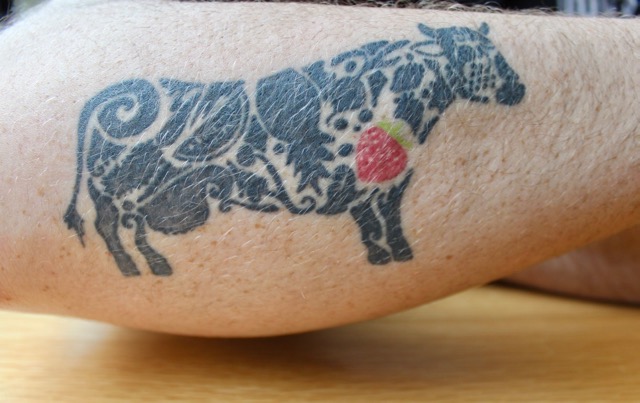 "The strawberry is for my grandmother on my mom’s side. She always had a strawberry patch at her house, and I had such fond memories of going over to her house and helping her pick them. And she’d always yell at me because I’d eat more than I’d bring back. I was 23 when she was diagnosed with Alzheimer’s Disease. And we knew she was sick because she stopped keeping up with the garden. In the end, I really wanted to find a way to keep that memory with me forever."

Loper says he’s certain he’ll get more tattoos in the future. But he says he’s taking his time and waiting until inspiration hits.

"Now that I know that culinary is the path I’m taking, I’d like to incorporate more culinary themed tattoos … maybe fruits, vegetables … My mother absolutely hates full sleeves. But, I’d really like to put tattoos all the way up my arm starting at the cow. My mom is a big gardener, and she has a huge green thumb. So, in a way, I’m thinking she won’t be able to object."