Paul Zerkel, chef and co-owner of Goodkind, says he's always appreciated -- and trusted -- the artistic sense that tattoo artists bring to the table. And that's resulted in some very creative body art over the years that both marks milestones and pays homage to art.

Paul Zerkel, chef and co-owner of Goodkind, says he’s always appreciated -- and trusted -- the artistic sense that tattoo artists bring to the table. 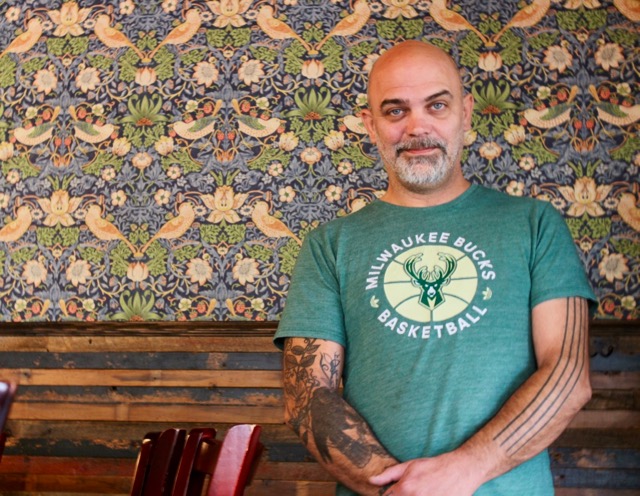 "For me, my tattoos have always a reflection of a time in my life, but they’re also an expression of the artist. I never come to a tattoo artist with a picture. There’s always a conversation involved, and I always want it to reflect the art that they create."

He pauses, admitting that there’s one exception: his very first tattoo.

"My first tattoo was a mosquito. It was 1989 and there weren’t a lot of people in my group of friends getting tattoos, but I really wanted one. I was 18 and I’d gone to a Primus concert and bought one of their stickers. I put it on my bass. At the time, you couldn’t get tattoos in Milwaukee, so we had to drive to Waukesha to get it. I went with my girlfriend at the time and I dragged my bass along. The tattoo artist pretty much copied the sticker. I thought it was cool."

"I had it for probably 26 years before I finally decided to cover it. It was time. I was tired of looking at it, and it no longer represented anything I wanted on my body. I’d grown out of it. Instead, I decided to put a black raven over the top."

The raven was inspired by an interaction he had while living with his (now) wife Lisa Kirkpatrick in Portland, Oregon.

"Lisa was working at a restaurant called Colosso, and one of her servers there had a brother who was handicapped. But, he was also known for being a mystic of sorts. One day he asked me: ‘Do you ever see a raven around you? That’s your spirit animal; he’s always keeping his eye out for you.’" 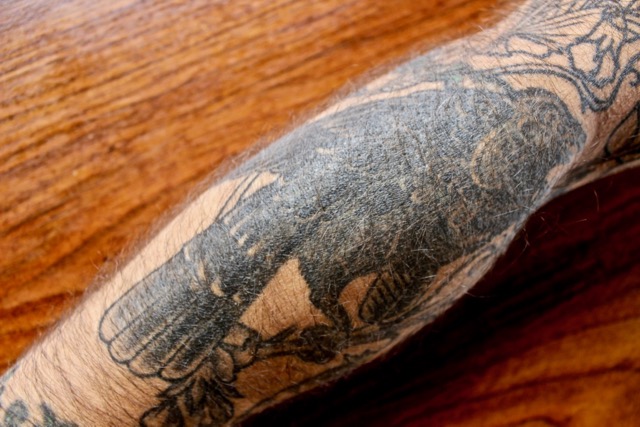 Zerkel says the experience made an impression. "Since then, I’ve become somewhat obsessed with ravens. I started really paying attention, and to this day I’m always looking around for them, wherever I am." 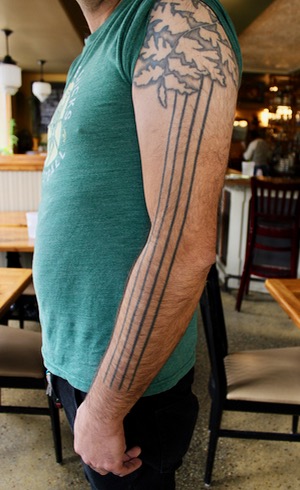 Zerkel, whose interest in music and theater earned him a slot as bassist for the Milwaukee band Soma in the 1990s, says music also became part of the equation when it came to body art. [Read more about Zerkel's rocker days here.]

"When we were living in Portland, I got the four strings," he says. "They bleed into a fern pattern on my shoulder. Ferns have always been one of my favorite house plants; I’m not really sure why. I guess it’s because they’re sort of these ‘Sideshow Bob hair’ looking things. I just really like their shape and pattern. The tattoo artist’s name was London Bellman; he was a friend of my chef at the time."

A couple of years later, after moving back to Milwaukee, Zerkel learned from a friend that there was a tattoo artist from Green Bay who was coming down to Milwaukee and hosting tattoo sessions in an acquaintance’s living room.

"I wanted a lace doily," he says. "At the time I had this plan to do this sort of ‘grandmother wall’ featuring little portraits of bands I loved along my arm, with a wall-papery pattern behind it. That never actually came to fruition. But, I kept the doily. I thought about covering it up, but ultimately decided to leave it. Oh, and it’s Packers green because we were watching a Packers game while he worked." 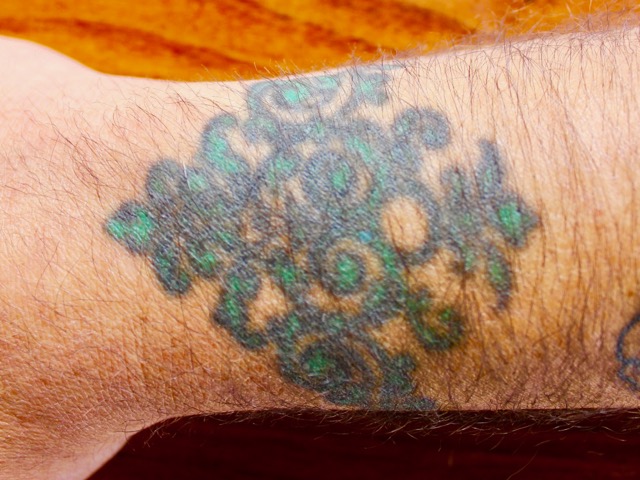 But music and mysticism aren’t the only themes Zerkel has represented on his body. There are also meaningful pieces that reference his work as a chef, particularly at Goodkind, which he owns with his wife Lisa Kirkpatrick, Katie Rose and Jess and William Seidel. Take for instance the pea tendrils that surround his raven tattoo.

"We’ve always said that we’re five peas in the pod," he says. "And that shows up in various places. There are actually five peas in our logo, symbolic of the five owners. And these are all peapods on pea tendrils that surround the raven. And now a few of us, including Katie Rose and Lisa have tattoos with references to peas in them." 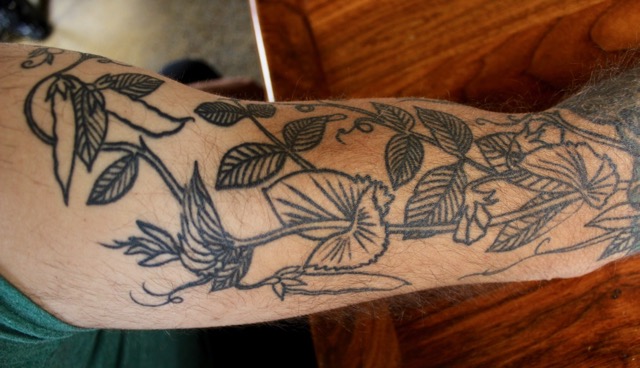 His latest body art, he notes, was a true commitment.

"We’d just passed our three year anniversary at Goodkind, and I thought: ‘It’s about time to reflect a bit.’ I’d pretty much settled on the idea of having a Goodkind tattoo, and I’ve always loved the idea of the "Love" and "Hate" tattoos from "Cape Fear." But, I wanted to keep the design really simple."

So, he consulted with Mark Meyer from Goodland, who drew up a design.

"Back in the 80s you’d never get a hand tattoo," he says. "And I’d always sort of maintained this idea that I’d only get tattoos that I could cover with sleeves … you know, in case I had to attend a wedding or funeral. But, I’m old enough now that I’ve stopped caring. I’m a chef, and this is my life. And I don’t really care if people make judgments about me at this point. People see the tattoo and they always ask me what I’ll do if Goodkind closes. The short answer is, I’ll have tattoos that say ‘good’ and ‘kind.’ And that’s OK, too." 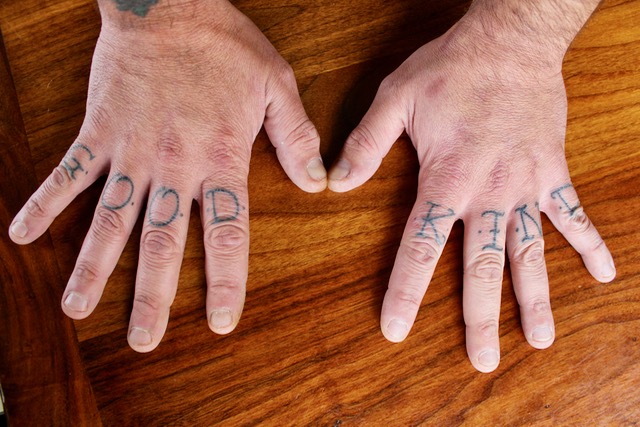 When I asked if the tattoos on his fingers were a particularly painful endeavor, he nodded.

"Yeah, it hurt. Fortunately, it was a really short sitting. It was kind of like getting dental work done; you can tell people it’s not going to hurt, but it always does. And, in the end, you’re branding yourself. So, it should hurt."

As for future tattoos, Zerkel says he still has future art in mind.

"I’m not done," he says. "In fact, I’m re-addicted, so to speak. At some point I have to get a pirate flag for my father, who passed away last year. And I’d like to get a laurel to tie the two tattoos on my shoulders together. It might even be something like the strawberry thief theme on the wallpaper at Goodkind …"