Gunther Stenzel grew up in a family where tattoos were the norm. And he says the art he's chosen for his body is a way of highlighting the various things that have held importance for him in his life.

As body art grows increasingly popular over the years, one trope has bubbled to the top of dining culture: the image of the tattooed "hipster" chef. And it’s no surprise; after all, kitchens are one of the places where you are not judged for the art on your hands, your biceps, your neck or your chest. Chefs are hard-working creative, emotional beings whose work is intensely personal. Their senses of humor are often fabulously twisted. And those are just some of the things that make the stories behind their tattoos so engrossing. This series is a tribute to chefs and their creativity, both in their kitchens and on their skin. Click for a look at the other articles in the series. 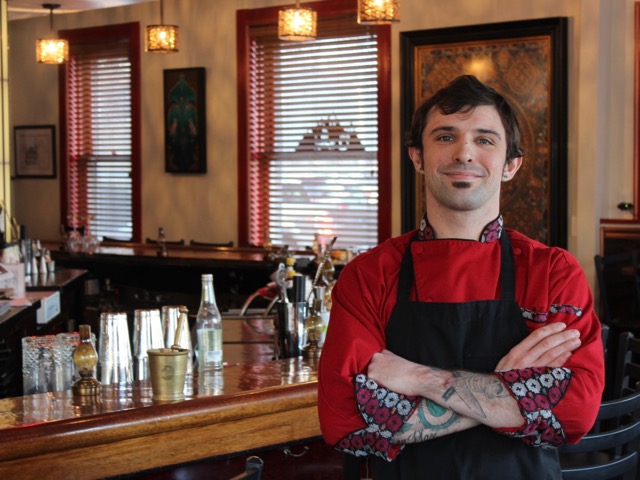 "To me, tattoos are a means of highlighting things that have particular importance to me at a given time," notes Gunther Stenzel of the cheel. "They feel natural because I’ve been surrounded by tattoos my whole life. My cousin is a tattoo artist, my mom and my sister both have tattoos, and my dad is covered in them. He’s always been someone I really looked up to, and he always stressed the importance of making sure my tattoos had significance behind them because they’d be on my body forever. So, I’ve always made sure I give a lot of thought to the art I choose."

Stenzel was 16 years old when he got his first tattoo. The early entry into the world of body art was made possible by his cousin, a jack-of-all-trades who worked as a tattoo artist.

"I was young, but I knew exactly what I wanted to do," he says, noting that he chose to display his family crest. "My grandfather spent a ton of time researching the family name, and along the way he found the family crest. It’s a cloud with an arm coming out of the cloud sticking a sword into the ground. It’s symbolic of strength and courage." 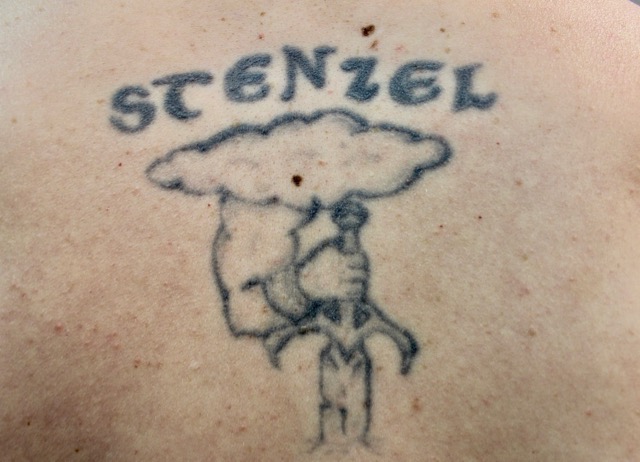 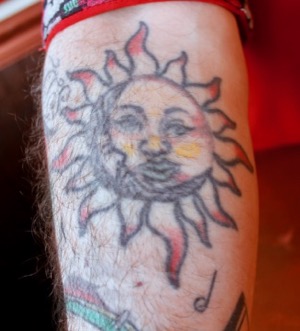 His second tattoo didn’t take shape until he turned 18.

"I’m really close to my mom," he says. "And out of nowhere, she surprised me and suggested we both get tattoos together. It was the one tattoo that I didn’t really contemplate for a long time; I actually just chose it at the last minute. It’s a sun and moon, and to be honest I was just really drawn to the design. I grew up in Arizona, and they have the most beautiful moons and suns. So, it was oddly appropriate."

From there, Stenzel says it was "all over."

"I met a tattoo artist named Ciaran Korb through a friend of a friend. At that point, he was an up-and-coming artist at Lakeside Tattoo. We hung out and I fell in love with his artwork; he’s great at shadows and shading and all sorts of stuff. Having a relationship with a tattoo artist was a big deal. I got to the point where I’d email him my ideas, and then he’d send back a mock-up and we’d make tweaks and changes until it was perfect." 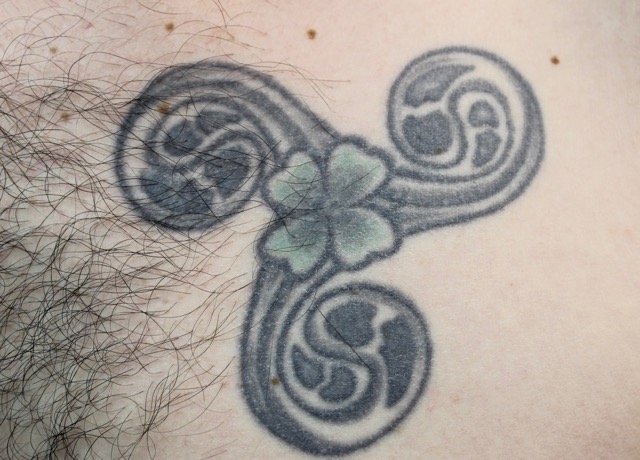 "It’s the inner workings of a Celtic knot which I tweaked with a four leaf clover in the center. It’s a tribute to my Irish heritage and it stands for life, death and rebirth. For me, it’s a reminder not to dwell on bad times. My grandfather always said ‘tough times don’t last; tough people do.’ And so it seemed very appropriate."

"Next was a tribute to my dad. My dad and I have a pretty different relationship than some people; he’s not only my dad, he’s also my best friend and we’ve always been super close. He’s a chef, and he was always my chief. He has a scorpion tattoo on the inside of his left forearm, and so I got one there as well. My scorpion isn’t exactly the same, but it’s very similar. I’m also a Scorpio, so it’s doubly appropriate." 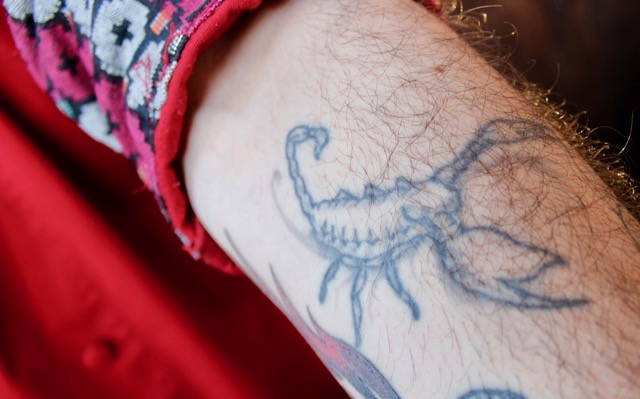 Stenzel says the beginning of his career began to take shape in his early 20s. 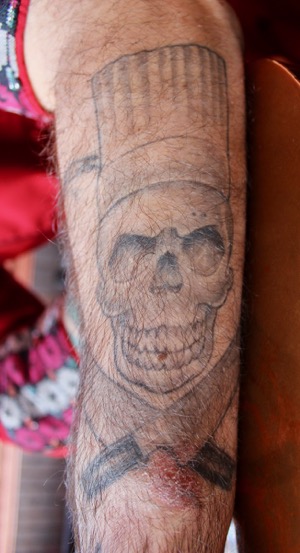 "I was so fortunate to have an amazing chef take me under his wing at a very young age," he says. "And I knew that I eventually wanted to get culinary related tattoos; but I wanted to earn my stripes first. Because of the way I was raised, I didn’t feel comfortable calling myself a chef before I’d done all the legwork. So, the next tattoo came when I felt as if I’d reached that point. I got my first chef position when I was 21, and I scheduled the tattoo pretty much right after that."

The tattoo depicts a skull wearing a traditional chef toque, with a set of chefs’ knives below.

"In a weird way, it’s a self-portrait," he says. "I’m classically French trained – by my dad, as well as a really talented guy named Mark Skrzypczak – so that’s the meaning behind the toque. And the skull has this sort of smirk on his face, which is really symbolic of my personality. Meanwhile, the knives depicted are mine. I actually brought them with me and he had them next to me while he was drawing the tattoo." 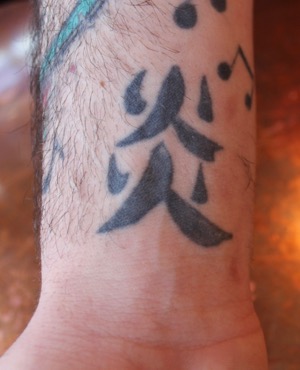 "At the time, a lot of people were doing Chinese symbols, and I really didn’t think I wanted one. But when I found this one it was just kind of cool and sleek looking. It’s also the elemental symbol for fire, which is the base for cooking. I’ve been working on the line since I was 12, so it’s just appropriate."

Stenzel is also a die-hard Green Bay Packers fan, so his next tattoo was built to represent that allegiance.

"The logo looks like it’s sewn right into my skin, and it’s dripping blood … because I bleed green and gold. Even in Arizona, I was that fourth grade kid who was decked out in. Both of my parents are from Wisconsin, and they passed on their love for the Packers."

From there, he says he moved on to a tribute tattoo for his mother. 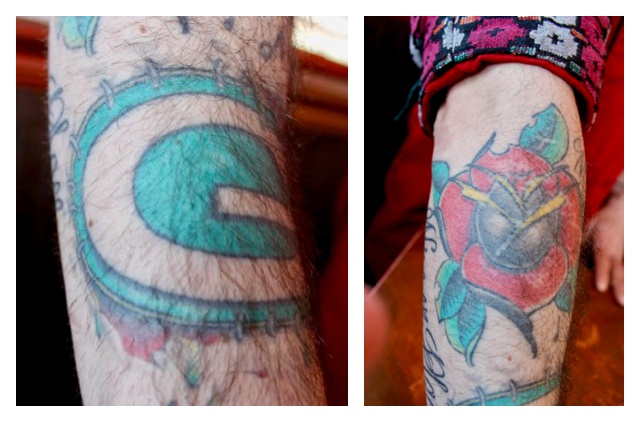 "I wanted something beautiful that stood for something she really liked," he says. "My mom loves roses, and although this tattoo doesn’t look anything like a rose, it’s rose-esque. It’s Cairan’s interpretation; if you look closely, you’ll see little bite marks in one of the leaves, and that’s a Cairan thing. And my mom’s initials are right above it." 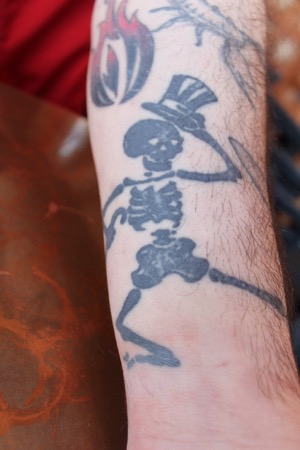 "I was raised listening to good old classic rock and I love the Grateful Dead with a passion," he says. "It was one of the first bands I got insane over. So, I got the skeleton dance tattoo to represent that.

"I always thought it was such a cool symbol, and it wasn’t a tattoo that everyone else had. At that point, the idea of the sleeve was taking shape, so I also filled in different areas on my arm with musical notes."

Yet another hearkens back to his culinary side.

"Mise en place is everything with cooking. It’s such an iconic term. And it translates into everything about life: you need things in order before you can begin." 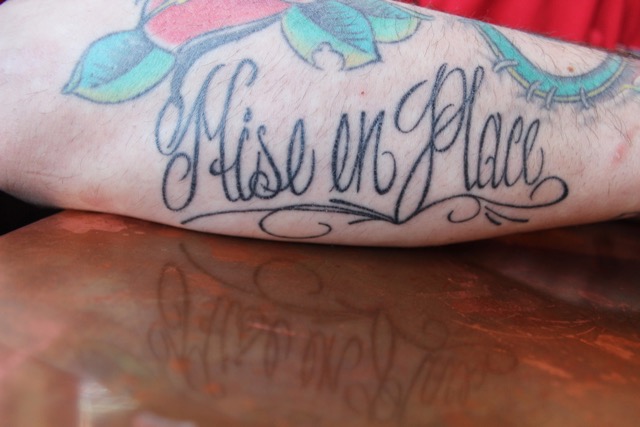 Stenzel’s latest art is a rendition of the flame from the cheel logo, a restaurant he says has shaped the way he thinks about food.

"Jesse [Daily] tried to get me to work here for almost a year before I decided to make the move," he says. "The timing was just right. I’d hit my plateau at Cafe 1505, and I refuse to be stagnant. I’m always looking for new experiences and challenges. And I knew the cheel would be a place where I’d learn all sorts of new and different things. I’ve been here for almost three years, and the experience has opened up so many doors for me. I’ve worked with so many different ingredients – from mako shark to camel – and learned so many things. And they’ve given me free rein in the kitchen. This place will always hold a special place in my heart." 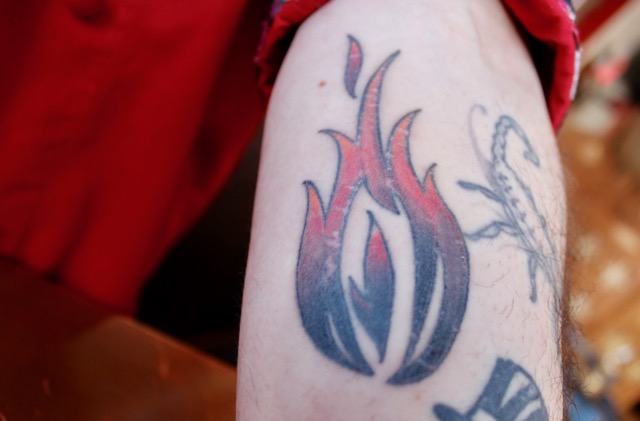 As for the future, Stenzel says he knows exactly where his next tattoo will go.

"I know it will be some kind of depiction of chefs tools in the upper portion of my right arm. I’m a little obsessed with the immersion blender, so that will definitely have a place in it."