Chefs' tattoos & the stories behind them: AJ Dixon of Lazy Susan

The passion and ingenuity chefs posssess is apparent in the dishes they serve; but it's also evident in the tattoos they choose to put on their bodies. This series is a tribute to chefs and their creativity, both in their kitchens and on their skin. 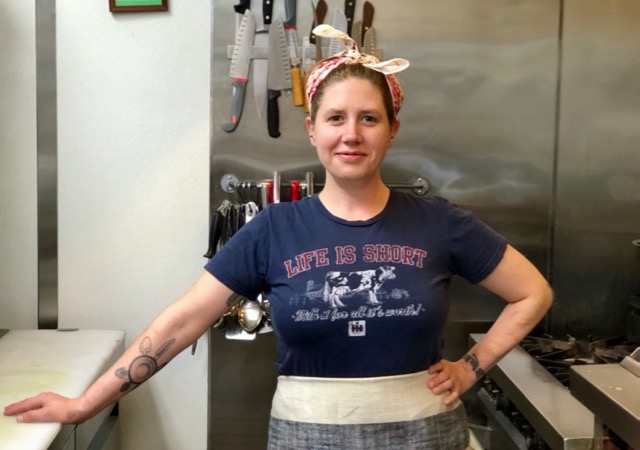 When Amanda (AJ) Dixon, chef and owner of Lazy Susan in Bay View, was 18 years old, she did what many 18-year-olds do: she got a tattoo.

"I went to Body Ritual on Prospect. It was late one night and I was with some friends, and we decided to just do it," she says. "I was thinking: ‘I love cats.’ I also love Halloween, and I have a Halloween cling on my truck that’s a picture of a cat, and I thought ‘I’ll get that cat.’ I ended up putting it on the back of my neck; I have no idea why I did that.

"When I came home with a second tattoo on my chest, that was a big deal. I don’t wear jewelry or necklaces, so I figured it was like wearable jewelry. But, it was a shitty tribal tattoo, and it was the first one my dad freaked out over. My friend Greg made fun of me for it for so long... it ended up to be my one regret tattoo. To be honest, all of my very first tattoos were just random. I wanted tattoos; I wanted something. But, now the things that I choose have more meaning."

In fact, meaning was eventually made of her tribal chest tattoo, which she recently augmented with a more meaningful design.

"This was a design I’d been thinking about for a really long time, and it's so appropriate that it features vegetables," she says. "My tattoo artist free-handed the whole thing. There’s peas, pea tendrils, a chanterelle mushroom, a jalapeno, a carrot, a leek, a shallot and a tomato. And we’re not done. Ultimately I want something that extends shoulder to shoulder.

"Whenever I've gotten tattoos, I never wanted color; it sounds silly, but I was always afraid it would clash with something I wear. But I’m seriously contemplating getting this one colored in."

Another tattoo that has particular meaning for Dixon is one on her wrist. It’s designed in Sanskrit and means "I am watched over." 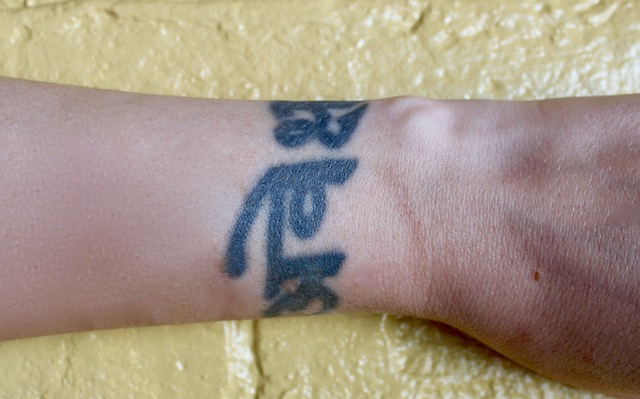 "It’s really for my mother," Dixon says. "She passed away when I was 14 years old, and I’d always wanted something that would remind me of her. At the time, everyone was getting Chinese symbols and characters, and that was never an option. It was so common. And as I was looking through designs, I was struck with how beautiful the sanskrit was. I put it on the back of my wrist, so it’s a bit like a watch.

"When times are bad, I can just look down and think of her and know that things are going to work out. I really think that when people die, they’re there watching over you. And as time passes, you have all these people who are looking out for you. It’s a comforting thought.

"A year or two ago, I got a tattoo on the back of my calf of the dish that ran away with the spoon from 'Hey Diddle Diddle.' It has a lot of different meanings. It’s food related. It’s one of my favorite parts of the nursery rhyme. And I have kids. So, it kind of wraps all those things together. 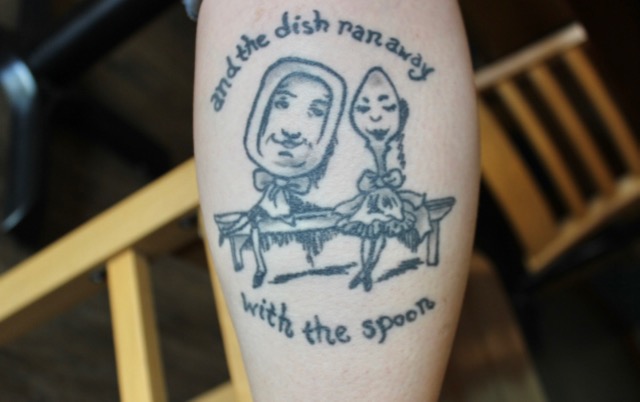 "To get at the design, we looked through a whole bunch of vintage photos and combined them. It’s one of those that I forget it’s there. I see it when I’m shaving my legs. And it’s like a pleasant surprise."

As far as future tattoos go, Dixon says she’s not sure what’s next. "I’m not done getting tattoos. I just don’t know what all of them are yet."