Chefs' tattoos & the stories behind them: John Rudolph III of Millioke

For Chef John Rudolph III of Downtown's Millioke restaurant, tattoos are a way to keep life from growing stagnant. "Body art is really a unique form of expression," he says. "And I love how artists take the ideas that you have and really interpret them. It's harnessing what they do well."

"I’m never stagnant, and I get bored easily," says Chef John Rudolph of Millioke. "So, tattoos are one of the ways that I keep things changing, keep them from getting boring. I worked at the Boca Raton Resort and Club in Florida for about eight years before moving to Milwaukee.

"So most of the tattoos I have come from one artist: Dave Porter at Hellcat Tattoo in West Palm Beach, Florida. Body art is really a unique form of expression, and I love how artists take the ideas that you have and really interpret them. It’s harnessing what they do well." 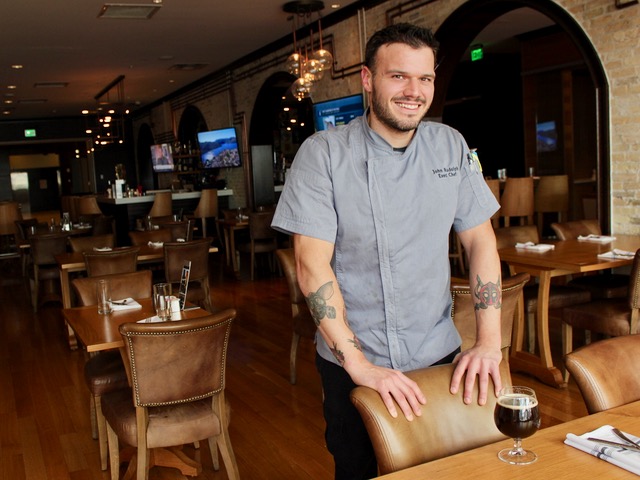 Rudolph says his first tattoo was a shield with a Celtic cross on it that he got on his upper arm when he was 19 years old.

"I went with my dad and we both got our first tattoos together in my hometown of Buffalo, New York," he says. "It was kind of unplanned; he actually brought it up. He’d always wanted a tattoo and we went together. My family can trace its ties back to Ireland and Poland and Germanic tribes, so there was a little bit of ancestry, and it seemed cool at the time."

Despite the familial connection, Rudolph says that, after a time, the design just didn’t speak to him anymore.

"I had it up until four or five years ago. I covered it up with a leather armor pattern. It wasn’t so much a regret tattoo, but it was pretty basic and boring. And it didn’t have the feeling I wanted. After working with other artists, it really wasn’t in sync with the rest of the artwork."

Rudolph says he didn’t foray into food-related tattoos until he was in his mid-20s. However, as he delved more deeply into the culinary aspect of his career, he began choosing designs that aligned with his profession.

"A lot of them were on the fly," he says. "A friend would say they wanted a tattoo, and I’d go along and end up with one, too."

One of the first food-related pieces of art he got was a boar’s skull depicted with with a chef’s knife and piece of bacon. 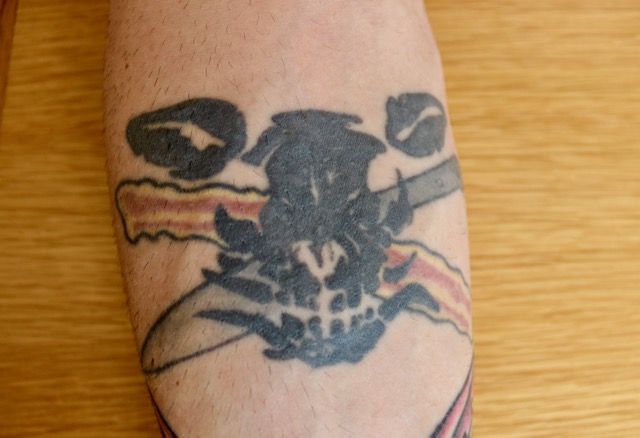 "One of my first amazing food memories is related to a pig roast we had at church," Rudolph explains. "My dad was a minister, and it was this great event. I still remember them taking down the pig and the smell of the wood burning and the pork … I think it was the moment I really fell in love with pigs.

"Pigs are such cool adaptable animals; you pull them out of their environment in a domestic situation and put them in the wild, and they go through amazing transformations, from their behaviors to the actual shape of their skulls. And there’s so much of the pig that you can use – from trotters, to crispy pig ears, cracklins from the skin, head cheese. And they’re just delicious."

In the end, his right forearm became an homage to the scintillating swine. 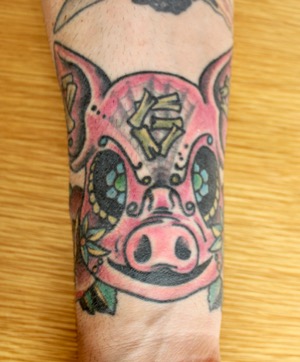 "One of the next was my sugar skull pig," he says. "My best friend Rene Luna and I met in Boca Raton; he’s a chef at The Drake. He was originally from Mexico and hadn’t been back in a while, so we went on a trip to Mexico City. We stayed with his cousin and visited all the local spots.

"It was really really cool; the food culture is crazy down there. There’s shops that sell whole chickens they’ll cook for you, and tamale stands. And every day it was something new. I got the tattoo when I got back; it’s kind of a commemoration of that trip, that experience. It was black and white for a long time, but I went back to Florida last year and had it filled in, and now it really pops."

Eventually, the theme for Rudolph’s tattoos transitioned over to another culinary love: craft beer.

"In culinary school we had to take this really intense class in wine and wine tasting. Interestingly, learning so much about wine just reinforced my love for beer. I’m not a stuffy person, and I really love the community that surrounds the beer community. There’s so much camaraderie and history surrounding it, and it’s such a great match for food. I joined a beer club at the CIA in Hyde Park where I was going to school. At the time the craft beer scene was really starting to come around, and really learning about and rediscovering the connections between beer and food."

His experience inspired a leg tattoo featuring the quote "He was a wise man who invented beer," along with artistic depictions of both hops and barley.

"From there, I thought: ‘I already have this big homage to beer,’ " he says. "So, I moved on to add the Flying Dog logo, which was designed by artist Ralph Steadman. I just really loved how it looked ... and then I got the Dead Guy from Rogue. It was such a great beer, so well balanced."

Next was the Dogfish Head motto "Off center ales for off center people," a Brooklyn Brewery logo and the Black Pegasus from Unibroue. 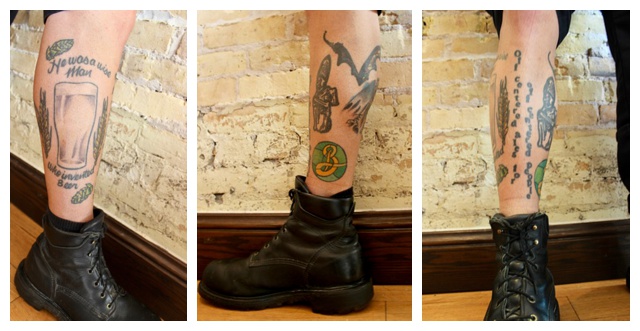 "I’ll add to that collection with a few more tattoos from breweries here in Milwaukee," says Rudolph. "Beer is one of the main reasons why I chose to take a job here. There’s such a great beer culture, and so many great breweries opening. I came at the perfect time, just before the huge influx of breweries."

"The book has all of this great artwork, and one of the photos features a pig with an eye patch drinking a beer. I wanted to make it my own, so I talked with Dave, and we sorted out a design where the pig has just one leg and he’s holding a cleaver."

The remainder of the bar scene came about in parts. Next up was Mr. Duck.

"It’s an homage to my grandfather who really loved mallard ducks. His look depicts Victorian era dress; he’s got a monocle, a flask in his pocket, a slicing knife and a scar on his side that’s a sideways reference to foie gras." 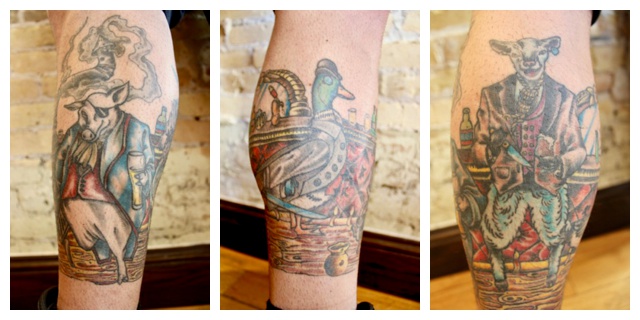 Rudolph admits that the story behind Mr. Lamb verges on the morbid.

"Rene told me a story about a time when his family had a lamb that got scared; it ran and got tangled up and strangled itself. At the time I heard the story, I was in the process of finishing that part of my leg, so I decided to incorporate a lamb into the scene. In this case, the lamb has a noose around his neck, kind of like a neck tie. He’s holding a snifter and has a little boning knife."

Rudolph says he’s currently in the process of scoping out tattoo artists in the Milwaukee area to continue his journey.

"I need to find somebody that I really sync with," he says. "It’s so weird. I’ve had so many of my tattoos done by one artist, and I really want to be sure that whatever others I get don’t stick out because they’re too stylistically different. Plus, in a way, it kind of feels like I’m cheating on Dave."