Chefs' tattoos & the stories behind them: Lisa Kirkpatrick of Goodkind

Lisa Kirkpatrick, chef and co-owner of Goodkind, says she's always chosen tattoos on the basis of their artistic design. As a result, some of the designs she's chosen have had particularly unexpected consequences. 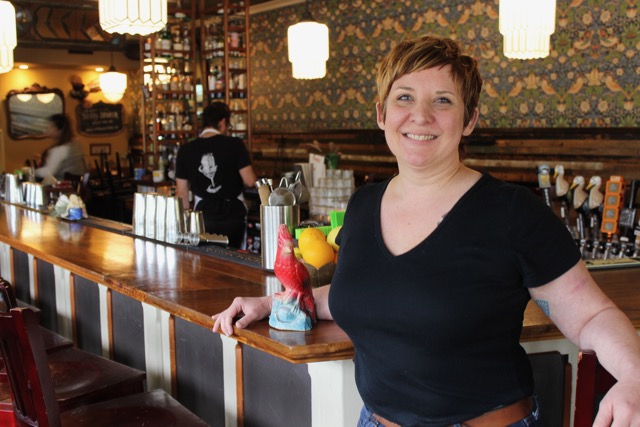 "I think I was 21 when I got my first tattoo," says Lisa Kirkpatrick, chef and co-owner of Goodkind. "At the time, I just wanted to get a tattoo. I was living in Chicago, and the artist was doing tattoos out of his apartment. It’s an ankle piece with a Celtic cross that’s based on a piece of jewelry I brought in. And I asked them to do some viney flowers."

Unlike many, for whom the excitement of that first tattoo is a short-lived proposition, Kirkpatrick says she's never had regrets about the choice. "I’ve been looking at it for 25 years, and I still like it," she says.

The same is true for her next tattoo, which she got on her 24th birthday. She'd moved to Milwaukee and – at the time – tattoo shops were illegal in the city. So, she says she drove out to Waukesha to have it done.

"I woke up in the morning and thought: I’m going to get a tattoo today," she says. "I had an idea of what I would get. It was based on a really old stone replica of a tortoise that was in a book. I really liked the skeletal-ness of it, so I took the book and showed it to the artist and he designed it around that." 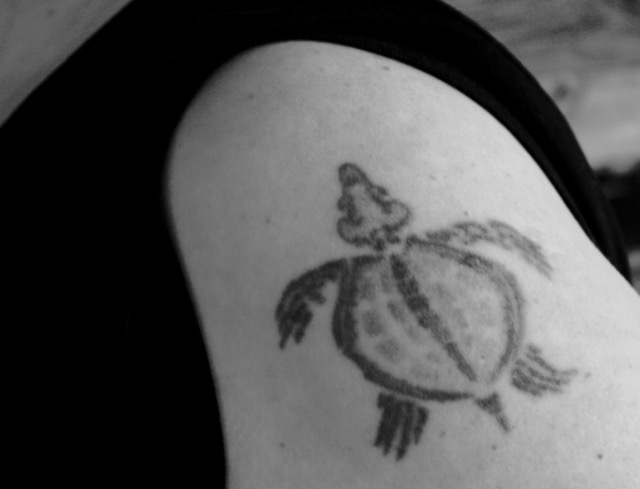 Afterwards, she said she learned a bit about the assumptions people make when you tattoo a turtle on your arm. For one, people automatically assumed that Kirkpatrick had a particular love for turtles.

The turtle gifts eventually ceased. However, years later Kirkpatrick says she had a very different experience during a trip to Santa Fe, New Mexico, to meet a good friend.

"I was wearing a tank top all the time since it was so hot," she recalls. "And people were just obsessed with the tattoo. Everyone kept reaching over and touching it, and telling me how much they loved it in this really new age-y way. It was really weird, and a little creepy."

Her next tattoo was a larger production.

"I wanted something that depicted the changing of the seasons," she says. "And I knew I wanted it to wrap around my arm. My friend Tim is an artist and he actually designed the leaf pattern. I went back to the apartment tattoo guy, who actually had a shop by that point, and he did the tattoo and added the tendrils around it. The piece was originally supposed to be filled in with autumnal colors to depict each season, but I never went back to get it finished." 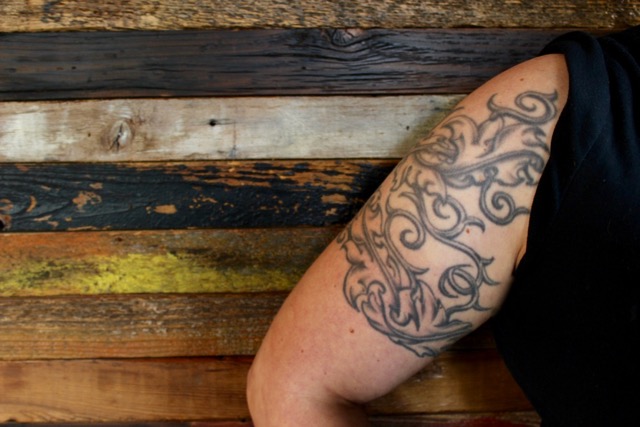 Kirkpatrick says it was years before she even thought about getting another tattoo. Instead, she moved to Portland, Oregon, to work on her career as a chef.

"There were a lot of talented artists there, but they were also really expensive. And I was prioritizing my career and putting lots of money towards travel. I also didn’t really have any concepts that I felt like I had to have at that moment."

But, this past summer, inspiration hit. And it came in the form of birds.

"Just before we opened Goodkind, one of our potential vendors asked us, as a group, what our spirit animal was," she recalls. "We kind of laughed about it, but then we looked around. And clearly it was a bird. There are all these little random pieces of art, ceramic birds [like Cleveland the cardinal, pictured above] and tchotchkes around the restaurant, along with the wallpaper."

She says that birds also held special meaning for other women in her life, including her mother and mother-in-law.

"They loved birds," she says. "But, cardinals in particular were special to each of them. In fact, the birds carried this sort of mystique, memories of people who’d passed … almost as if they felt that the individuals were coming back to visit them, or watching over them." 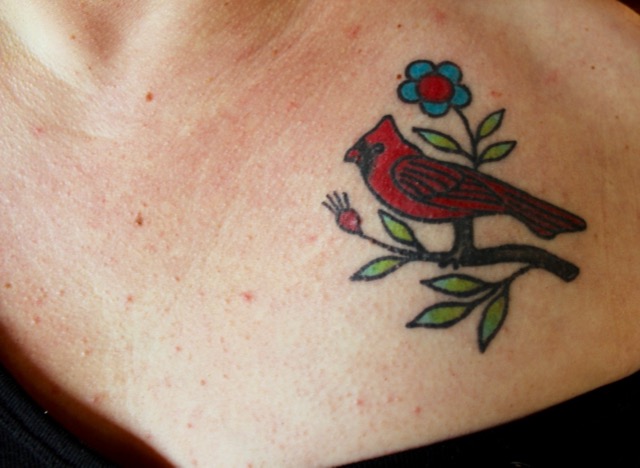 So, when Kirkpatrick found a small antique pin with the inlay of a cardinal at Chattel Changers on Capitol, she says she had to have it.

"I bought it and I took a bunch of pictures of it and then gave it to Paul’s [Zerkel] mom for Mother’s Day," she says, noting that the the photos became the inspiration for her next piece of body art – a chest tattoo featuring a cardinal.

"I shared the photos of the pin with Ben Murname at Good Land and he created a design around it," she says. "I was going to put it on my arm, but then we talked about it and decided to put it on my chest. I wear a lot of v-necks, so I see it every now and again when it peeks out of my shirt. It’s so fresh, and it’s done with really vibrant colors. I don’t wear a lot of jewelry because I work in a kitchen, so it’s kind of like my jewelry."

Kirkpatrick says she's not sure when the inspiration for her next tattoo will hit; however, she says she might settle in on a design that's been in her head for years.

"For me, tattoos have always been about the art, the textures, the designs," she says. "One of the things I’ve talked to Ben about over the years is a piece of art that I found in Portland that I really wanted to buy and never did. And I’ve regretted it ever since. It was a picture of an octopus. The markings of the Octopus are a bit like a Cheshire Cat, black and white stripes. I’ve never really been able to find the image again … it’s just been floating in my head. So, we’ll see."