Where do you find Chicago-style deep dish pizza? Lori Fredrich is exploring the Chicago deep dish pizza scene in Milwaukee, visiting a variety of pizzerias to give you a full report on the flavors and textures youâll encounter. 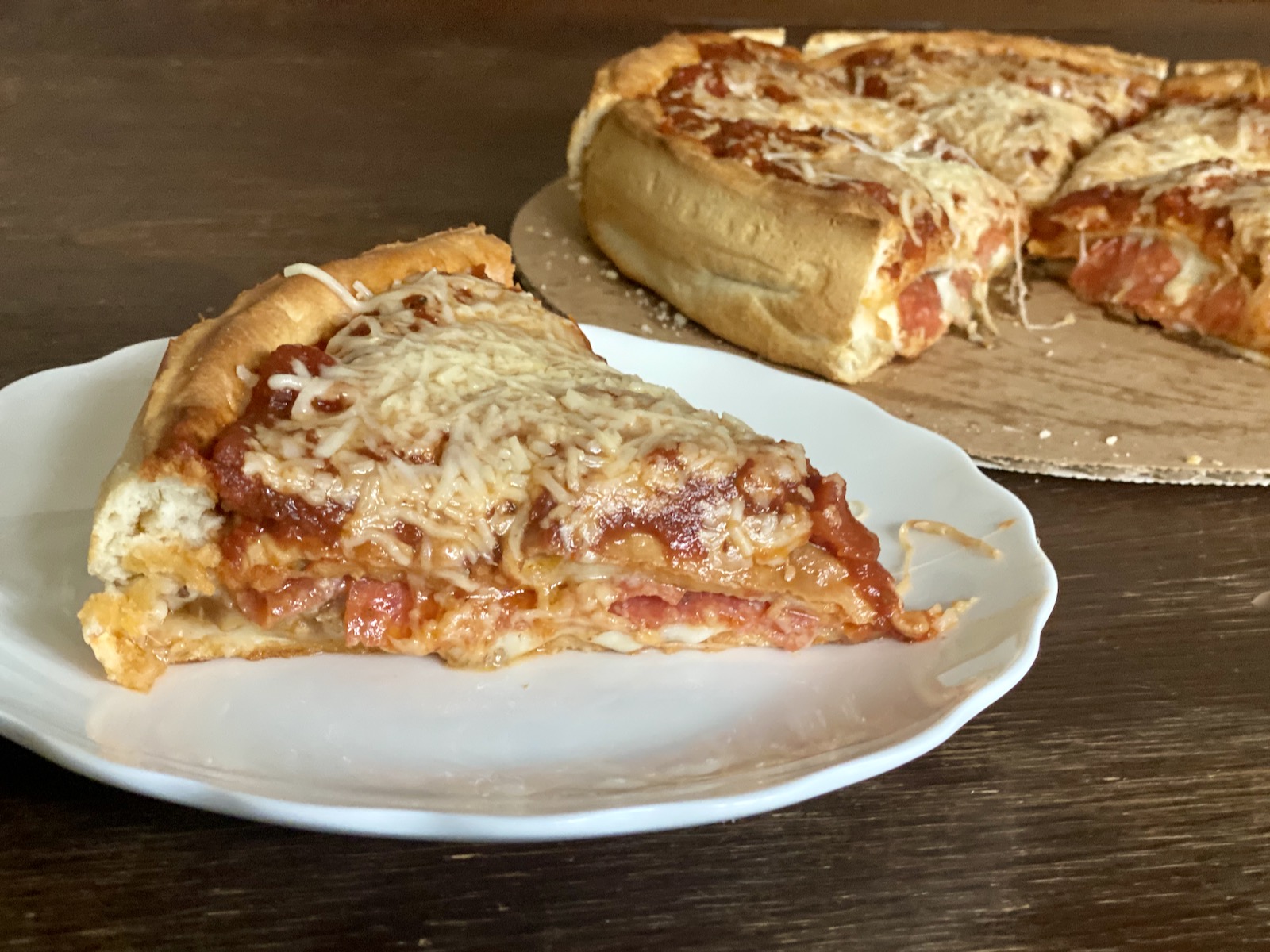 If you didn’t know better, you might overlook this South Side bar and restaurant located in a strip mall just off of Howard Avenue and 51st Street. But based on the crowds fairly early on a Friday evening, the venue has built quite the following since opening in 2014. They’ve also become a convenient spot for take-out thanks to their drive-thru, which allows for easy low-contact pick-up.

Among the things which contribute to the bar’s crowd of loyal visitors are its daily specials, which include tacos and buy-one-get-one (thin crust) pizza deals. But they also serve something a bit less expected: deep dish pizza, a pie they call “Chicago Style.”

For this piece, we ordered a Brewtown Eatery medium deep dish with sausage, mushrooms and pepperoni for carry-out. We also asked that it remain uncut (a request they honored), and you can see the lovely result: 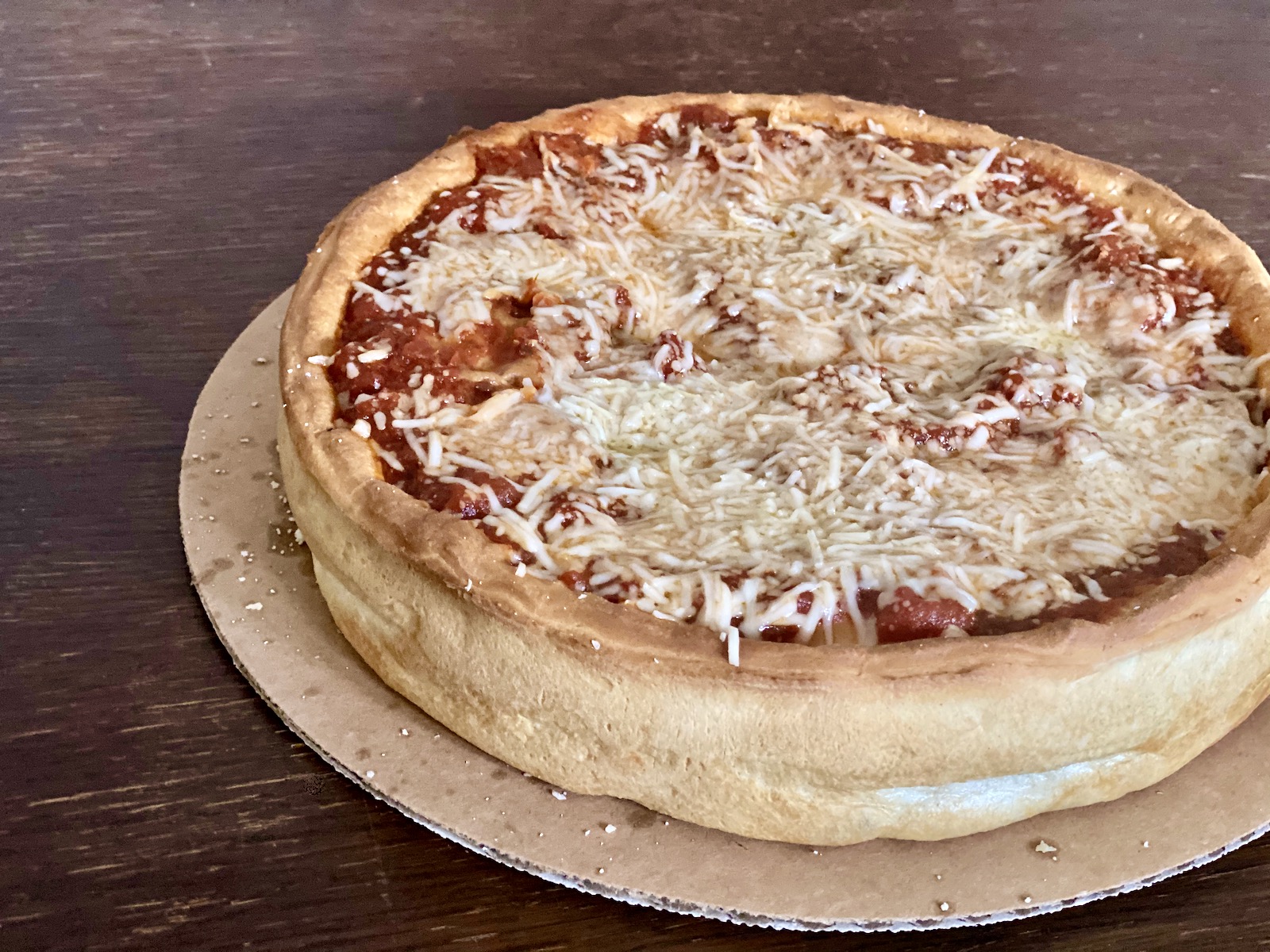 The pizza’s crust was thick, soft and bread-like with beautifully crisp edges, moderately crisp sides and a slightly thinner crisp bottom crust that made a beautiful base for the pie. Even better, it wasn’t at all soggy (big win for leaving the pie uncut).

Upon first look at the pizza, I had my suspicions that the pie was a stuffed pizza, rather than a classic deep dish. After all, it was deep and filled to the brim with toppings. As I sliced into the pizza and began examining the layers, I found I was right. There was, in fact, thin layer of crust on the top of the pizza, hovering just beneath the sauce. Wisconsin pizza places do seem to love their stuffed deep dish pizzas.

As for pizza’s toppings, which were laid down in the proper order (cheese on the base followed by toppings, sauce and a sprinkling of parmesan cheese), they were substantial.

The sauce, which was applied in a moderate layer (enough to completely cover that sneaky top crust) and sprinkled with parmesan cheese was pretty stellar. It was slightly chunky with a rich cooked tomato flavor augmented with a moderate amount of salt and seasoned with an Italian blend of spices.

Based on both their size and texture, the mushrooms were fresh, but well cooked and seasoned with salt (if they happened to be canned, they were of high quality). The sausage was flavorful with a pleasant texture, though not as fennel-forward as some.  The pepperoni, on the other hand, was less compelling. It was very mild, thinly sliced and had a texture akin to the deli-style pepperoni you can buy at the grocery store.

And then there was the cheese. The crust sported a generous portion of cheese, which oozed out of the pie when sliced and offered a significant pull when slices were removed. Yes, this was a stuffed pie, indeed.

Although I had to disqualify this pie from the classic Chicago-style deep dish category, it was tasty. In fact, it was among the better stuffed pizzas I’ve tried. If you like a deep dish pizza with a more bread-like crust, more sauce and more cheese, this is a good place to start.