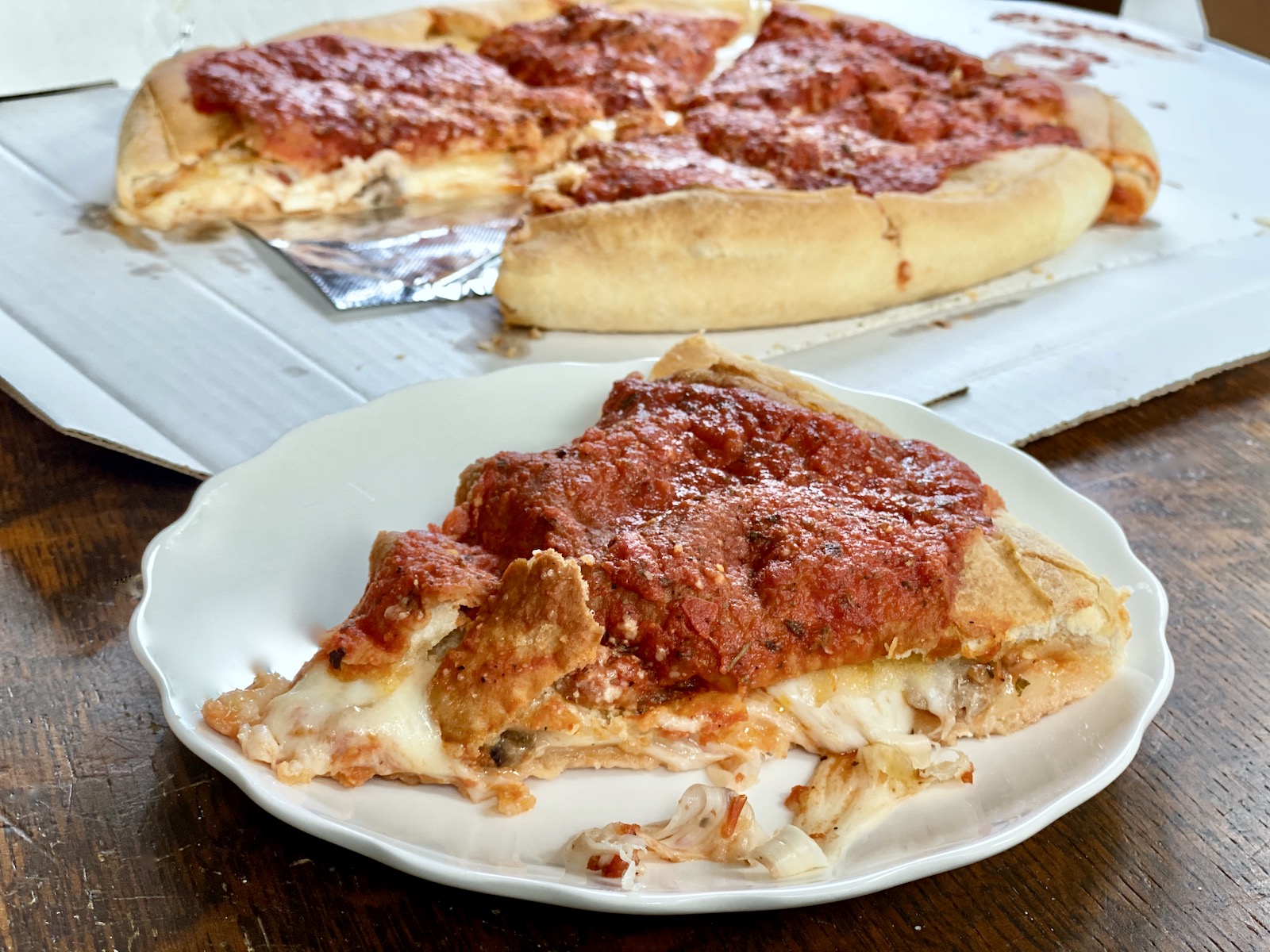 You could easily overlook Klasiana Pizza, located in a strip mall just across from the Southern end of Southridge mall. But the pizzeria, founded by Ylli Proko over a decade ago is well loved by locals, especially those with families, for its affordable pizza, sandwiches and Italian dishes.

For this piece, we ordered a Klasiana deep dish with sausage, mushrooms and pepperoni for carry-out. We did indicate in the notes/special requests section of our online order that we’d like the pizza to remain un-cut (for better transport). But my guess is that old habits die hard (or our note was overlooked), since our pizza did get sliced. Fortunately, we transported it in an insulated bag, so it stayed pretty warm.

Even before I pulled the first slice from the box, it was obvious that I’d found another stuffed pizza. That tell-tale layer of extra crust peeked out around the edges of the evenly applied sauce atop the pizza, mostly at the edges where the top crust connected to the edges.

That said, the crust was nicely browned all around. It was flakey and crisp on the edges, but more breadlike where it grew thicker on the sides, and there was extra cheese wedged into the edges of the crust, giving it an almost “stuffed crust” feel. The bottom of the pie was browned, but the bottom crust was slightly soft and soggy. This was likely partially from the pizza being cut and transported, but also because there was yet another layer of sauce spread across bottom crust as well as the top.

The pizza’s toppings were layered: first a bit of sauce, then the pepperoni, sausage and mushrooms followed by the cheese, the top crust and the top layer of sauce.

The sauce itself was smooth and notably seasoned with Italian seasoning. It was thick and mild with a fairly classic “pizza sauce” flavor. Despite being applied moderately, the sauce’s placement did make the layers of the pizza slide apart as one tried to cut through them with a fork.

The mushrooms were fairly sparse, but nicely cooked and not watery with a good earthy flavor. The Italian sausage was broken into very small pieces, but it was flavorful and well seasoned with a nice bit of fennel. The pepperoni, on the other hand, was nothing special; it was very mild, thinly sliced and soft.

As for the cheese, it was plentiful. The layer wedged between the sauce and toppings was notable and offered up a significant pull when removing slices from the pie.

Again, while it’s not a contender for the classic Chicago-style deep dish category, Klasiana presents a unique spin on the stuffed pizza with a thicker, breadlike crust, plenty of cheese and two layers of well-seasoned sauce.