Lovell talked about the sprawling $120 million complex, which will be nestled up alongside the Marquette Interchange, covering four blocks, in his second Presidential Address held today. The center, he said, will be a national destination for "scientific research in human performance." It will cover 12 acres, from 6th to 10th Street, Michigan Street south to the freeway.

The center, notes a Marquette statement, "will function as a central hub for research evolving in emerging fields, including exercise physiology, athletic training, biomedical engineering, and fields involving nutrition and rehabilitation."

Aurora will ante up $40 million toward the project, for which ground is expected to be broken in 2017. The structure will hopefully help enliven a patch of land, adjacent to the freeway, that has been underutilized for many years. A big chunk of that land has been vacant. 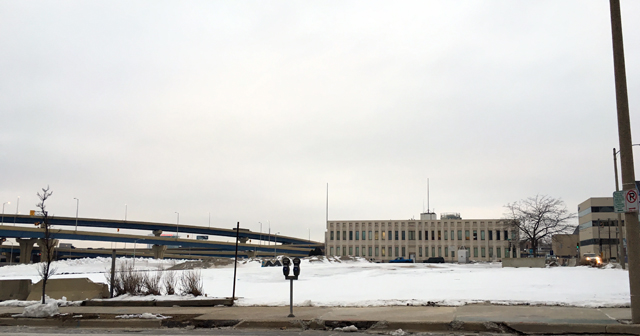 There is one structure on the western end of the land, between 8th and 9th Streets, and Michigan Street and McAuley Place. A smaller one on 8th and McAuley has already been removed.

Earlier in 2015, Butch's Old Casino Steak House closed and the building was razed to make way for the project.

Perhaps the project could spur development at adjacent properties, too, including the former Greyhound Station across the street on 7th and Michigan.

The plan is to coordinate the opening of the facility with the new Bucks arena. In last year’s address – his first as president of Marquette – Lovell suggested the Bucks would also be involved in the 250,000-300,000-square foot center, which according to the Marquette release, "will support elite intercollegiate and professional athletics, academic research and campus health and wellness initiatives."

An initial rendering of the building shows a broad, low structure with an arena-like sloped roof and copious windows on the south elevation, presumably matched with similar windows facing north.

"This partnership is a true differentiator, bringing experts from health care, higher education and the highest level of sports together to take health science, innovation and research to the next level," said Nick Turkal, MD, CEO of Aurora Health Care. "We are looking forward to providing unprecedented research and training opportunities at this world-class facility, which will help serve as a catalyst in further revitalizing Milwaukee’s Downtown region and be a driver for long-term positive change."