OnMilwaukee's Nick Barth and Matt Mueller are on a journey, burning their buds across the Brew City to find its spiciest dishes. Their next stop: the State Fair to battle some beef jerky featuring the spiciest pepper on the planet, the Carolina Reaper. 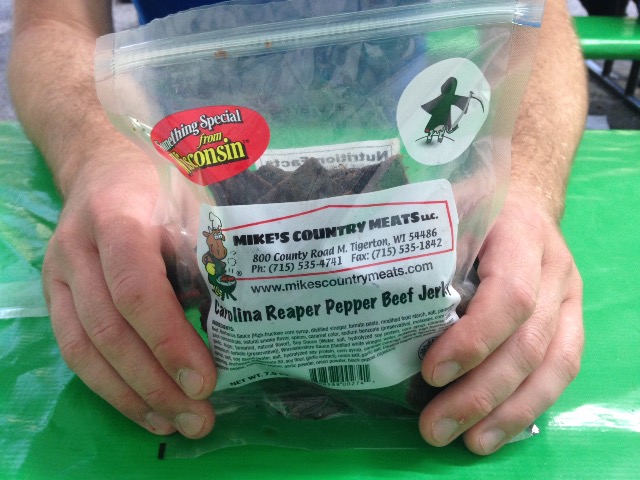 
After challenging the infamous ghost pepper last time, it only seemed right to seek out the true hottest monstrosity on the market: the Carolina Reaper, the official spiciest pepper in the world coming in with 2.2 million scovilles – double the ghost pepper – and an evil-looking stinger tail just in case you weren't scared enough.

Time happened to be on our side (or not, if our guts had their say about it) as our quest for the Carolina Reaper coincided with the Wisconsin State Fair. While dairy products and fatty delicacies deservedly soak up most of the spotlight (and your caloric intake for a month) you can find plenty of other oddball treats there – in particular at the All Things Jerky shop, located just east of the Exposition Center on South Grandstand Avenue.

There (or at one of its three non-Fair locations in Appleton, Minocqua or Eagle River) you can find a whole animal kingdom of meaty munchies, from alligator to kangaroo to antelope and ostrich.

But we had our eyes on finding a plain beef jerky that was anything but plain: the Carolina Reaper beef jerky, crafted (or perhaps summoned with some kind of satanic chant) up in Tigerton by Mike's Country Meats. 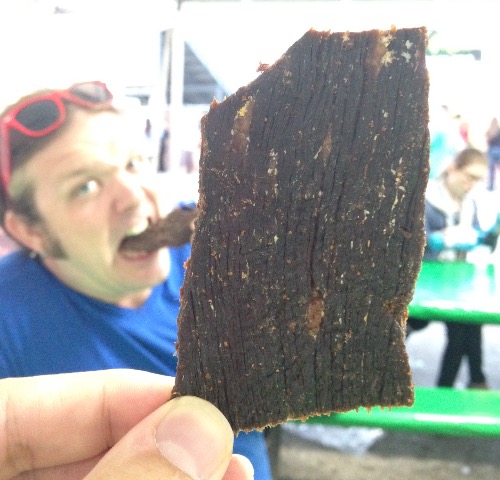 Nick: There really isn't any heat to this. Ground Carolina Reaper is waaaaaay down the ingredient list – and it shows. I was really looking forward to a good spicy jerky, but this is barely even "Milwaukee hot"; it's mild at most.

Matt: I was promised lava vomit and napalm tears from the Carolina Reaper. Instead, I got something like a mildly spicy barbecue-flavored jerky. There's a little bit of a burn, but really, it's modest at best, and we were able to chow down easily on several pieces in a row as though it was just regular jerky. I had even bought some lemonade for any emergency mouth extinguishing; it was completely unnecessary.

Nick: See above. Heat can't stick around if it doesn't show up to the party.

Nick: This is a super tasty beef jerky. I would eat this all the time. It's everything you want beef jerky to be: chewy, salty, and satisfying.

Matt: Here's the good news: As actual food, this jerky is delicious and insanely addictive. The texture is perfect, with a tough but tender chew, and the taste is that crave-worthy saltiness with just a hint of sweet. It may not bring the heat, but it will bring out your inner crazed carnivore, ripping and tearing at pieces of meat like a wild animal.

Nick: This is a really good jerky, though disappointingly not spicy. I'll definitely look out for the brand in the future, skipping the premium cost of the novelty-hot bag in favor of the everyday varieties.

Matt: If you're craving just some really scrumptious beef jerky with a bit of heat, by all means check this out. However, if you're looking for a true spicy challenge to give you a satisfying, one-of-a-kind singe – especially considering the star pepper's reputation – look elsewhere.

In short, don't fear the Reaper.

However, because Nick and I wanted to be thorough – or maybe just because we're culinary sadists with a death wish – we also received a single kernel sample of the stand's Crazy Corn Reaper, supposedly the "world's hottest popcorn." See the results for yourself:

Maybe an actual handful would change our verdict. Alas, next time, State Fair ...