Burning Through Brew City's search for spice takes us to the East Side, home of the newly opened Kawa Ramen and Sushi - as well as a spicy bowl of broth called the Hell Fire ramen. But will this dish take us to heat heaven? 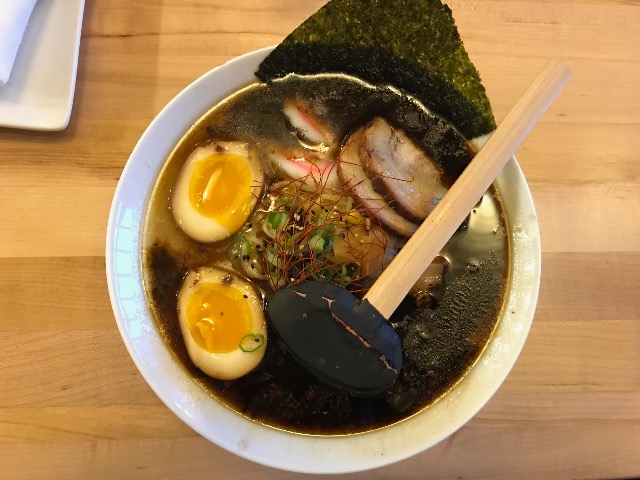 
Story time: There once was two little Milwaukee spice addicts, who wanted to do a head-to-head battle between the two new East Side ramen restaurants: Kawa, located at 2321 N. Murray Ave., and Yokohama. Both slurpful soup spots featured a spicy ramen on their menu, so it made sense to put the two to the taste-bud toasting test. But then, just as the two little spice explorers were set to head off on their adventure, Yokohama suddenly closed. Cue the sad trumpets. Cue the credits. The end.

Moral of the story: Never make plans. And also maybe don't open three ramen restaurants all within about a mile of one another.

Or maybe not the end. While we had to wave bye-bye to our head-to-head battle (and all of the spice-related puns and wordplay like "heated competition" and "hotly contested") thankfully Kawa is still plenty open – and still plenty delicious.

While it may have newly opened on the East Side just last September, the name Kawa should still sound familiar. After all, the restaurant's first location at 325 E. Silver Spring Dr. has already become a Whitefish Bay dining staple after just three years, opening in 2015. This second location, however, marked new territory for Kawa – not just because it's expanded to the East Side but because it's also expanded its Murray Avenue menu to include ramen. The restaurant even brought in a chef from Japan to train them for three months on how to boil the broth and serve the soup right – and the results show.

Kawa's clean but warm wooden interior is cozy, but it's the smells and steam coming off of the ramen bowls that really sooth the soul, all loaded with traditional ramen ingredients like pork belly, soft-boiled egg, bamboo shoots and mushrooms. Or less obvious additions, such as the pool of Japanese chili oil sitting and taunting you on the surface of Kawa's Hell Fire ramen (ordered at the maximum three-chili extra spicy level in our case, natch). 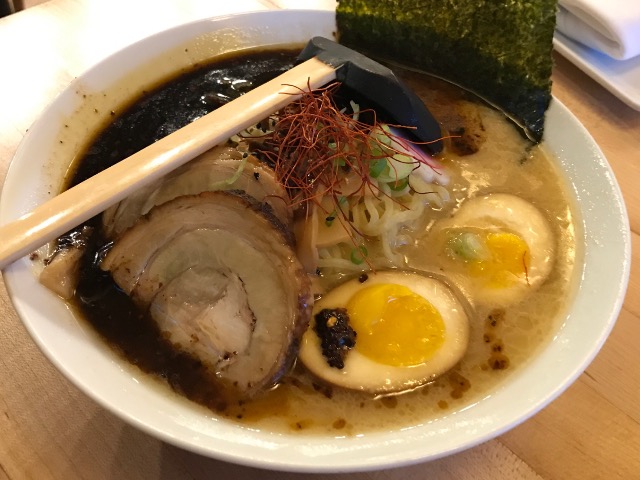 But could Kawa's Hell Fire ramen deliver a burn worthy of the two-bowl battle we originally had planned? Let's slurp and see!

Nick: The heavy float of chili oil, practically a layer unto itself, warns you the ramen's coming in hot. I thought it was going to build over time, but it leveled out pretty quickly. Maybe the fatty tonkotsu broth kept the chili in check or maybe the oil's bark is worse than it's bite, but in any case, the Hell Fire ramen isn't going to burn your mouth down.

Matt: As any good ramen fan knows – and as any good etiquette teacher loathes – slurping is the optimal way to attack a bowl of ramen. But slurp this Hell Fire ramen if you dare – especially on the first spoonful. That burst of burn, courtesy of the serious dollop of chili oil on the surface, heads straight to back of your throat and knocks your buds around for a bit (Nick and I both think there's maybe a little Szechuan pepper in there, providing a little numbing surprise). It's by no means the fiercest fire – it's more bonfire than hell fire – but it's definitely there, and it's definitely delicious, adding a little jolt to your typical ramen experience.

Nick: I don't find infused chili oils to be particularly long-lasting. The mild-mannered heat remained for the meal and politely left by the time we did.

Matt: Your first slurp of the Hell Fire ramen may immediately pop with a potent burn, but that thrilling kick to the back of your throat gets quickly cooled by the rich, fatty tonkotsu pork broth. Plus, since the chili oil floats on the top of the bowl, you'll probably have more soothing broth than singeing oil by the end – though, as one commenter noted on our Facebook Live, stirring in the oil at the beginning would help disperse it throughout the meal. A good tip for the next time I'm craving this, aka everyday from this day forward.

Nick: It may not tip the heat scales, but the Hell Fire ramen is a great "hot" dish. Kawa's ramen is already a great example: chewy noodles, a fatty and flavorful broth, just-crisp pork and the usual accoutrements. The chili oil levels it up with a smoky spice that adds dimension to without overpowering the dish. All we could do at the table is comment on how good it was. Not a drop left behind – and for my part, I'm already planning my return trip.

Matt: Kawa's spicy ramen won't blow your mind with heat, but it will blow your mind with flavor. The slight sizzle from the oil plays just so perfectly with everything you love about a bowl of ramen: the fatty pork, the rich broth, the crunchy bamboo shoots and the chewy black wood ear mushrooms. (You know how I know this dish is good? I don't like mushrooms and yet I couldn't stop noshing on these.) And, of course, the noodles rounding everything out and giving you that extra satisfying slurp. For a spicy dish that delivers a burn, it's also oddly homey and comforting. Who knew Hell Fire could taste so heavenly?

Nick: On one hand, I'm a little disappointed that it didn't kick as well as I'd hoped. On the other, Kawa's Hell Fire ramen is so good it belongs on a cooking show with Action Bronson. It's a solid contender for best ramen in Milwaukee and definitely worth going back for.

Matt: Valentine's Day is just around the corner, so allow me to profess: I love this ramen. It's nowhere near the spiciest thing in Milwaukee, but it's exactly what you crave in spicy food – no matter your tolerance for taste-bud-torching. Veteran fire eaters as well as delicate diners can enjoy this blissful zing of heat and the way it punches through this already power-packed flavorful bowl. It's not stunt spice. It's not no-show spice. It's just perfect.