OnMilwaukee's Nick Barth and Matt Mueller are on a journey, burning their buds across the Brew City to find its spiciest dishes. The first stop on their capsaicin-rich quest: Red Rock Saloon for its TCB ghost pepper wings.

Thanks to many dedicated people and businesses, Downtown is the heart of Milwaukee and the entire state of Wisconsin. This week, OnMilwaukee presents Milwaukee Downtown Week, sponsored, aptly, by Milwaukee Downtown, BID #21. For seven days, we will share stories, videos and photography profiling some of the neighborhood's best offerings and celebrating those who make it so great.

The first stop on their capsaicin-rich quest? 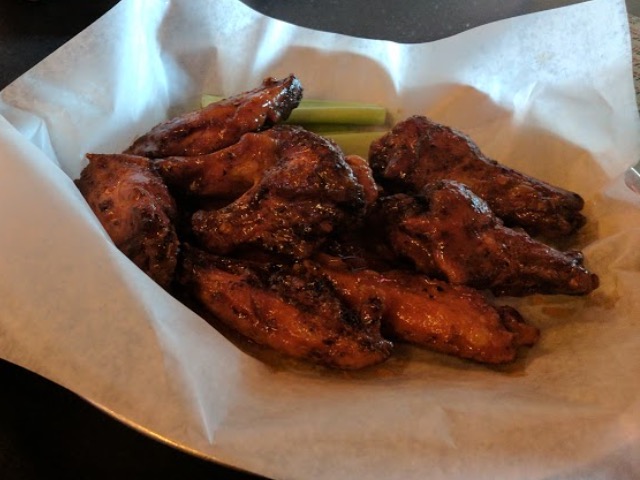 Red Rock Saloon is known for a number of things: blasting country music – both live bands and radio hits – out of its thirst-quenching Water Street nightlife hot spot, bucking patrons off of its feisty mechanical bull and busting even the strongest stomachs with its Unforgiven Challenge, a timed food gauntlet featuring two half-pound burgers topped with cheese, bacon, a deep-fried chicken breast, more cheese, more bacon, lettuce (see, a vegetable; it's healthy!), tomato and onion strings, all plus a basket of fries – and only 23 minutes to clean your plate.

What interested Nick and I, however, wasn't the big gut-busting burger at the challenge's center but the underrated final part of The Unforgiven food challenge: the TCB wings, which slathered in that most tantalizingly terrifying of culinary nightmares, the ghost pepper.

Now, the ghost pepper (proper name: Bhut Jolokia) isn't the hottest pepper in town anymore; in 2017, the Carolina Reaper technically brings the most heat, while the ghost ranks at a mere seventh place. However, thanks to the fact that it was the first pepper to score over a million scovilles (the scientific measurement of spiciness) the ghost pepper is still a food legend – and still capable of turning seasoned heat seekers into desperate, dignity-leaking messes of sweat, tears and sauce.

In other words, sounds like a great starting point!

While you could get the wings through The Unforgiven Challenge, you can also just order the TCB ("Taking Care of Business," for those in the know) ghost pepper wings on their own, with a platter of eight costing $10.99. If you're looking for a cheap Downtown lunch or dinner, however, Red Rock Saloon knocks the price down to .50 cents a wing all day on Mondays.

But will these wings cost us our tongues? Let's chow down and find out.

Nick: Make no mistake: The wings are hot. The ghost peppers in the TCB sauce bring a sharp burn to anything it touches. Your mouth will burn. Your tongue will burn. Your lips will burn. Got a dab of sauce on your cheek? That's going to burn, too. It's a very bearable burn, though, and not terribly challenging. If you're a spicy food fan, you can do this.

Matt: Forget any horror movie: The most terrifying moment of the year so far for me was when these fiery nuggets showed up at the table, and merely breathing in singed my nostrils. You could taste the heat even before picking up a single wing; how would I survive actually putting one of those taste bud atomic bombs in my mouth?

As it turns out, pretty well! The TCB sauce most certainly still packs plenty of heat, but it's more of a slow, escalating burn than an instant forest fire in your mouth. You'll grow to feel plenty of sizzle on your tongue, mouth and lips, but you won't feel any pain or regret. I didn't even have to resort to the glass of water for help well into the meal.

Nick: I expected an all heat blast-o-rama, but Red Rock's TCB sauce was surprisingly flavorful. A pleasant sweetness and healthy dose of garlic balance the ghost pepper heat and really rounded out the flavor. It reminds me of a much hotter version of Secret Aardvark (a breakfast favorite). It was so good, we not only scooped up what was left of the sauce with the celery to get another taste, but we ordered a second round of wings immediately after the first.

Matt: I'll be honest: When I hear about a supposedly CRAZY spicy dish – especially one that is included in a crazy food challenge – I assume it's solely a stunt. I assume it's all flash and no flavor. But color me surprised: These weren't stunt wings; they were just actually delicious wings. The meat was tender and juicy, and the sauce itself wasn't just pure overwhelming napalm, as there was actually a lot of sweetness to the sauce, which helped balance out the heat. It's more taste than treachery.

Nick: The burn comes on a bit slow; we were on our second or third wing and wondering what was up before it really started to kick in. Once going, the burn lingered pleasantly and the first round's burn was fading by the time the second order arrived. On the walk back to
the office, the heat settled into a warm belly burn that lasted the rest of the afternoon.

Matt: The feeling of spice radiating from my lips and tongue satisfyingly lasted all the way from the first bite of the wings to the start of the next order. A full session of spice – though by the time we walked back to the office, all was normal.

Nick: This is the kind of unexpected food find we're after. Red Rock Saloon's TCB wings aren't the endurance test I expected. They're a well-balanced and super tasty start to this spicy food hunt. I'm definitely going back for thirds.

Matt: I walked into this maiden meal expecting a scorched mouth and, worse yet, some subpar stunt wings that were more focused on devastating taste buds than giving them anything delicious to work with. I walked out of Red Rock Saloon with a satisfyingly sizzled palate and some new competition for my favorite wings in the city. Here's to the rest of this quest being this good.